Skip to content
December 26, 2013/Comments Off on Stickney trustee resigns from Lyons school board 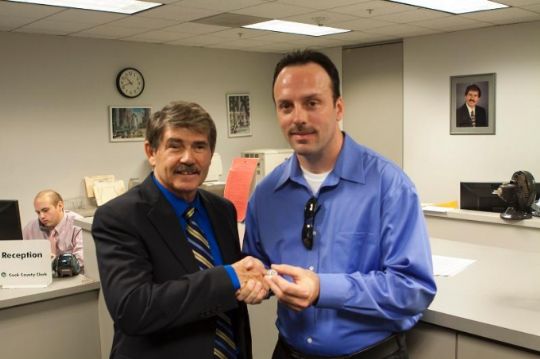 Lyons Elementary School District 103 has begun the process of filling a Board of Education vacancy created last week by the surprise resignation of board member David DeLeshe.

DeLeshe turned in a terse resignation letter Dec. 16 announcing his immediate resignation from the school board. He was appointed to the board in January 2009 and elected to a four-year term in 2011.

He gave no reason for the resignation,” said Marge Hubacek, the superintendent’s secretary for District 103. “It was a single sentence announcing his resignation effective Dec. 16.”{{more}}

DeLeshe may have resigned because of his additional duties as a village trustee in Stickney. He was still a member of the village board as of Friday.

He was elected to that post in April in an election that was decided in May by a coin toss by Cook County Clerk David Orr after DeLeshe and incumbent Trustee Lea Torres tied in the election with 573 votes each.

Efforts to reach DeLeshe were unsuccessful.

DeLeshe was the vice president of the school board when he resigned.

Hubacek said the district has 45 days in which to fill the vacancy.

She said interested applicants have until 4:30 p.m. Jan. 10 to file a letter of interest explaining their background and desire to serve on the school board.

Applicants must be 18 years old, have lived in District 103 for at least one year and be registered voter.

The district includes most of Lyons, part of Brookfield and all of McCook, Forest View and Stickney.

The board will decide which candidates it will interview for the vacancy, Hubacek said.

She said board President Sharon Anderson wants to fill the position at the school board’s Jan. 27 meeting.

Whomever is appointed will serve until the end of DeLeshe’s term in April 2015, when the district will have five of its members up for election.