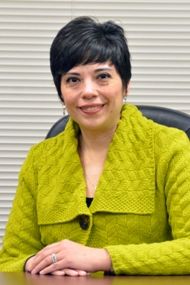 Lyons School District 103 welcomed a new board member this week when Connie Esparza was sworn in during a very short Board of Education meeting Monday evening.

The school board also elected a new vice president.

Deanna Huxhold, who was not in attendance, was nominated by Schaeffer for the position.

After Schaeffer assured members that Huxhold was fine with the appointment, Anderson said there was Òno vote needed.”

In other action, the board approved the employment of Molly Quiroz as ad building technology specialist. The position is for 20 hours a week with a pay rate of $24.25. She has already started in the position.

It was also announced that there would be districtwide anti-bullying assemblies to be held during the second week of February.

Anderson reminded the board that Jeff Cohn would be in on Feb. 20 and surveys needed to be turned in by Feb. 16 or Feb. 18.

Although Supt. Mary Jo Vladika did not attend the meeting, she passed along thanks to the board for closing the schools during the inclement weather. She also thanked the custodial crews for their great work.