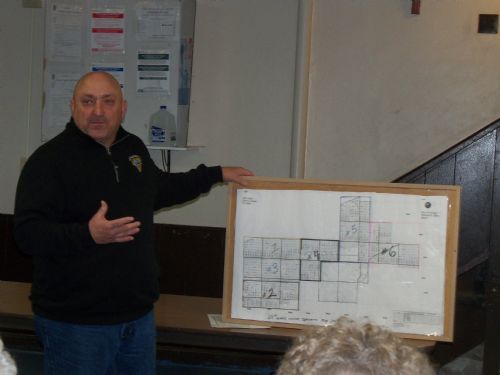 Al Cacciottolo, the 23rd Ward superintendent who was presented with a plaque honoring him for his work in the ward over the harsh winter, provided insight into the snowplowing system. He also discussed efforts, under way now, to repair the potholes that have pockmarked many local streets.

In addition, Cacciottolo addressed the issue of burst pipes caused by age and the freezing and thawing weather patterns, as well as controlling rats drawn to debris uncovered by melting snow.{{more}}

The superintendent, a local business owner who also heads the Garfield Ridge Neighborhood Watch, explained to the group gathered at Risen Savior Assembly Church, 6059 S. Archer Ave., that potholes were largely caused by the freezing and thawing cycles, and the problem was exacerbated by persistent snows, and the need to keep plowing newly repaired streets.

He said the more permanent hot asphalt is not available until April, when the weather warms up, so cold patching has been used.

ÒCold patches don’t adhere as well to the surface, so plows pull them up again. But we’re doing the best we can,” said Cacciottolo. ÒWe all know it has been a terrible winter.”

ÒThe number of potholes are bad for aesthetic reasons, as well as safety. It makes the neighborhood look unattractive. We’re not used to that,” said Lila Sepulveda, a trustee on the GRCL board.

ÒI think we’ve done a pretty good job for the weather we’ve had,” said Cacciottolo, referring to the plowing. He said the city Department of Transportation is understaffed, and is having a hard time keeping up with the potholes.

However, Cacciottolo predicted that by the end of May, they will be largely taken care of. He said that under Zalewski’s orders, some badly damaged streets, such as Archer Avenue between Harlem and Sayre Avenue, will be completely redone.

Cacciottolo explained that the ward is split into six zones for plowing. The old ward boundaries are followed rather than the redrawn map that will come into play for the 2015 aldermanic elections.

The old boundaries, at some points, stretch north to the Stevenson Expressway, east to Millard Avenue, south to 65th Street, and west to Harlem Avenue.

Cacciottolo said the number of plows deployed depends on the severity of the snow. The prime concern is keeping the main arteries clear, and then interior streets. He said that some plows are sent out to spread at the start of a snowfall, and more go out as it progresses.

ÒThey wait until the snow comes down and stops (before sending 100 percent of the crews out)” because they don’t want to waste salt and fuel,” said Cacciottolo. He pointed out that the salt is loaded at 73rd and Cicero, and the fuel pumps are at 39th and Ashland, so trucks must spend time and fuel driving back and forth.

He said he suggested stationing a fuel tank at 73rd and Cicero but was denied due to staffing issues, since union drivers are not allowed to pump their own gas.

Alleys are not generally plowed by the city, but Cacciottolo said he has tried to get to alleys as much as possible because so many people would have been unable to get their cars out otherwise. He said the ward was assigned a pick-up truck with a plow, which he often manned himself to clear alleys and side streets whenever time permitted.

ÒAld. (Mike) Zalewski wanted us to do it, and I try to do as much as possible for the community we all live in,” he said.

At about that point in the meeting, Garfield Ridge Civic League President Richard Techman, and Vice President Henry Pakula, presented Cacciottolo with a plaque from the group, thanking him for his work over the winter.

Techman confided to the group that Cacciottolo found him stuck in the alley twice, and was able to clear a path for him to get out. Cacciottolo figures he rescued about 50 other people trapped in their garages.

He said the recent ward remap has benefited Garfield Ridge residents because although the neighborhood is now divided between the 13th, 14th, 22nd and 23rd wards, all the ward superintendents and aldermen work well together and help each other’s areas. ÒI think you’re getting the best of everything. You’ve got everyone working together to get things done,” said Cacciottolo.

In other business, local travel expert and tour guide Ed Kozak discussed his plans for a June 21 trip down historic Lincoln Highway that the Civic League is sponsoring. He said the 54-seat coach bus headed for north-central Illinois will leave Gloria Dei Church, 5259 S. Major Ave., at 8 a.m. and return about 8 p.m. Stops will be made along the way in towns such as Geneva, DeKalb, Creston, Rochelle, Ashton and Franklin Grove. The cost is $40 per person, not including lunch at the Lincoln Inn in DeKalb.

Checks may be made payable to the Garfield Ridge Civic League and sent to Kozak at 5202 S. Lotus Ave. More information and reservations may be made by contacting Ed Kozak at (773) 585-0624, evenings.