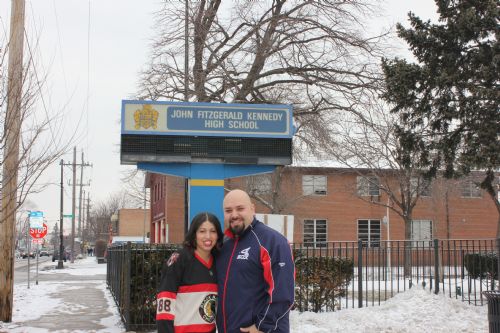 The non-denominational Christian church had rented space at Kennedy once before, from 2002 to 2004, until it bought a building at 4101 W. 51st St., in Archer Heights, which is known as its Midway location.

ÒWe’ve seen an increase in our membership from Garfield Ridge and Clearing, so we wanted to provide services in that area,” said Juan Sanchez, a Garfield Ridge native who graduated from Twain School and Curie High School. Both he and his wife, a Bogan High School graduate, are Chicago Public School teachers. He teaches at Zapata Academy in Little Village, and Rosa teaches at Pulaski International School in Bucktown.

ÒThe vision was to bring the church to the people,” said Sanchez earlier this week, explaining why the decision was made to open a Garfield Ridge campus. He said about 200 people turned out for the April 6 service, held in the Kennedy auditorium, as they will be every week.

Sanchez noted that he and his wife are not ordained ministers, but rather lay leaders of the church that has a membership of more than 4,800 people and 34 worship services held at the 20 campuses around the Chicago area.

New Life also has a location in Queretaro, Mexico.

ÒWe lead the church services,” he said. ÒIt is a lively atmosphere, with a lot of music and singing,” said Sanchez. He said Pastor Mark Jobe gives the sermon through a video feed, enabling him to speak to worshippers at several church locations.

While the service is going on, babysitting is available for infants and toddlers, as well as Sunday school for children up to sixth grade. Programs for youths in junior high and high school are being planned.

Juan said he and Rosa have been involved in New Life for nine years, overseeing marriage ministry and youth groups.

ÒThis is a dynamic church. We believe in reaching out in the community. (We want people) to experience a reconnection with God. Having God in your life brings a lot more purpose as well as being part of a church that is open to you,” he said. Sanchez noted that while services are held in English and Spanish at some of the church locations, services at Kennedy will be completely in English.

The church is also planning other community activities to be held in the neighborhood following worship services.

After services on Easter Sunday, April 20, an Easter egg hunt for children will be held about 1 p.m. in Wentworth Park, beside Kennedy High School.

Also, a church softball league is getting started, with all the campuses fielding teams. Games will be played at 3 p.m. Sundays in Vittum Park, 5010 W. 50th St.

More information about New Life Community Church and its various locations may be obtained by going online at www.newlifechicago.org.