May 8, 2014/Comments Off on Area shooting puts new cop in crossfire 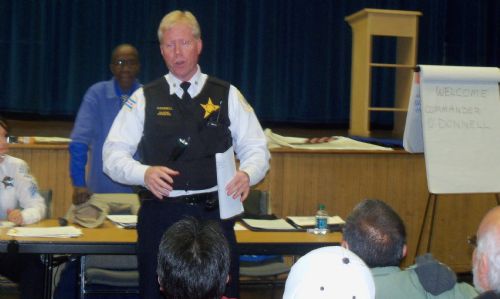 The April 11 murder of a man in the 8100 block of South Kilpatrick Avenue was among the issues discussed during an 18th Ward crime prevention meeting held May 1 at Bogan High School, where new Chicago Lawn (8th) District Cmdr. Jim O’Donnell introduced himself to residents.

ÒI know the police cannot be everywhere. I don’t expect them to be,” said Ald. Lona Lane (18th), who hosted the event in the high school auditorium at 3939 W. 79th St. ÒI want to stress that it is our responsibility too (to keep an eye on what is going on around the neighborhood).” {{more}}

The meeting was held in conjunction with the Beat 834 monthly CAPS meeting, held as usual on the fourth Thursday of the month at Bogan. Beat 834 encompasses the neighborhoods of Ashburn and Scottsdale, stretching from Kedzie to Cicero Avenue, roughly between 77th and 87th Street.

O’Carroll described the shooting on Kilpatrick of Andres Cervantes, 22, as a case of mistaken identity by gang members, making finding the gunman Òa top priority” for police.

She said Cervantes, of the 4000 block of West 58th Street, was an innocent bystander in a gang dispute. He was sitting in a vehicle at 2:40 a.m. when a van came toward the car and flashed its lights before someone in the van opened fire. Cervantes was hit in the head and shoulders, and died at Christ Hospital.

It is thought the vehicle he was in was mistaken for a gang member’s vehicle.

Residents also asked for a progress report on the investigation into the April 9 shooting of a man in the 8400 block of South Kedzie Avenue. The victim, who survived, was waiting in line at a restaurant to pick up his food order when unknown gunmen waiting across the street opened fire on him and a friend.

O’Carroll said the investigation is ongoing but the victim is not cooperating with police.

ÒWe do have a success story,” she said, explaining how five offenders were caught breaking into cars in the 3700 block of West 81st Street thanks in part to 911 calls from sharp-eyed neighbors.

ÒTwo people called 911,” said Meehan. ÒIf you don’t call, we don’t come,” he added, encouraging residents to call 911 if they are at all suspicious of activity going on around them.

ÒThey’re mostly juveniles,” said O’Donnell, so they likely will get off lightly if it is their first offense. But a 16-year-old has been charged with burglary. Ò(Juveniles) don’t get housed unless it is a serious case, like shooting,” said O’Donnell.”

ÒBut keep calling,” he urged his audience. ÒDon’t get demoralized (by lenient sentences). You are our eyes and ears in the community.”

ÒIt is demoralizing for us sometimes,” said O’Donnell, a 28-year CPD veteran who led tactical teams in the Englewood (7th) District and elsewhere. Most recently he was commander of the 16th (Jefferson Park) District.

ÒEventually, history will catch up to them,” he said, noting that jail sentences are handed out to repeat offenders. He noted that convicted burglars who speak to community groups usually say Ònosy neighbors” rather than dogs or burglar alarms led to their arrests.

Catalytic converters being stolen off cars also was a problem over the last month, and Ziegler said the court advocacy program is monitoring three cases.

The officials explained that thieves are after the platinum in the catalytic converters, which are sawed off mufflers and sold to scrap dealers.

ÒThey’ll have to have ID, phone number and address. And they won’t be paid in cash. They will get a check mailed to them,” she said, giving time trace thefts.

Responding to audience questions about issues such as prostitution, bicycle patrols and Òbucket boys” at intersections, O’Donnell said he agrees with Cook County Board President Toni Preckwinkle’s view that prostitutes and shoplifters shouldn’t be in Cook County Jail, since the limited space is needed for violent offenders.

O’Donnell said that while he is Ònot a big fan” of bicycle patrols, because cars will get officers to crime scenes quicker, their use may be expanded in the 8th District Òbecause my boss likes them,” he said, referring to Supt. Garry McCarthy.