November 12, 2014/Comments Off on St. Rene community organizes in effort to save school 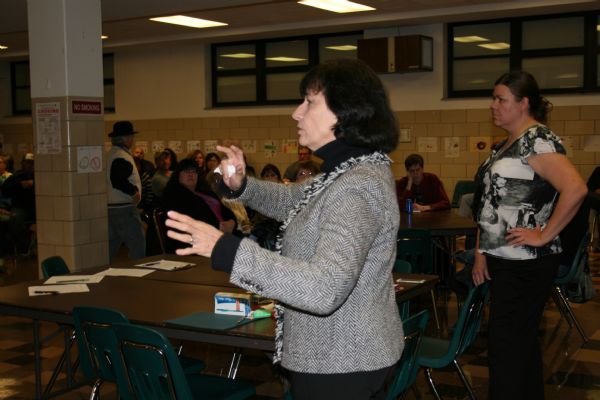 St. Rene community organizes in effort to save school

Parishioners, students and community leaders gathered last week at St. Rene School Hall to review their options on how to keep the school open.

St. Rene School, 6340 S. New England Ave., is one of nine schools that the Chicago Archdiocese plans to close in June. The other local school set to close is St. Turibius, 4120 W. 57th St.

A crowd of more than 100 people gathered for the meeting. Anita Cummings, a parishioner for 47 years at St. Rene and who is also the executive director of the United Business Association of Midway, served as the spokeswoman at the meeting.

Cummings, whose three children attended St. Rene, told the crowd that everyone in the room was working for the same goal Ñ to keep St. Rene School open.{{more}}

Residents at the meeting agreed with Cummings that no prior warning was given. The Rev. Tom Bernas, pastor of St. Rene, received the phone call from the archdiocese on the morning of Oct. 29 informing him that the school would be closing.

Officials from the archdiocese said the affected schools had an average enrollment of 125. Bernas said the enrollment at St. Rene is about 170.

Several parishioners at the meeting said that if the archdiocese had mentioned that enrollment needed to be at the desired level of 225 they should have been told.

Cummings and other residents wondered why a series of transformation committee meetings were held this year outlining goals for the next three to five years. For whatever reason, no officials from the archdiocese attended these meetings, said Cummings.

A steering committee was formed at the Nov. 6 meeting to try and persuade the archdiocese that the school should remain open.

Committee members include Kamaal Khazen, a longtime parishioner who taught for many years at De La Salle Institute before retiring several years ago. He also coached boys soccer at the school.

Other members of the committee are Chris Sanchez, who serves on several programs at the school and is the dean of students at St. Rene, and parishioner John Donato.

The steering committee has several goals that they need to emphasize quickly. Marketing tops the list along with fundraisers.

Some local organizations have vowed their assistance. Jerry Hurckes, chief of staff for U.S. Rep. Dan Lipinski (D-3rd) attended the meeting and said that the congressman’s office would make and distribute ÒSave St. Rene” School buttons.

Other organizations have promised donations. But Khazen pointed out to the crowd that the first goal would be Òto convince (the archdiocese) that this school should remain open.”

Parishioner and former school board member Mike Bianchi said that this parish had many good people. But other residents suggested that perhaps they had been too quiet.

ÒI just think the archdiocese thought we were just going to roll over,” said Cummings.

While the archdiocese has not given specific reasons as to why St. Rene School should close, Bianchi emphasized that enrollment was the key.

Cummings sympathized with parents whose children were scheduled to return to St. Rene next year. She told one parent that she should enroll their children at another school but to not give up on sending them back to St. Rene.

Steering committee members said that a more aggressive approach was necessary to recruit students to attend St. Rene. The archdiocese needs to be persuaded that enrollment will increase in the next few years and remain consistently in the range of 225 students.

Cummings added that is why it is important to recruit children for preschool and kindergarten so that those enrollment numbers will improve in the years to come.

Another parishioner said how important it was to fill the ministries at the parish. Attending Mass regularly and filling the church pews would get the attention of the archdiocese.

ÒIf you fill the ministries, I guarantee you they won’t close the school,” the parishioner said.

Cummings was in agreement. She added that closing a Catholic school in a neighborhood could have a negative effect on a community.

ÒSometimes this is a blessing in disguise,” said Cummings. ÒIn times of crisis, people pull together.

ÒBut what I see, with everybody here tonight, tells me that they won’t close this school,” added Cummings.

More information about the drive to keep St. Rene open can be found at www.savestreneschool.org.