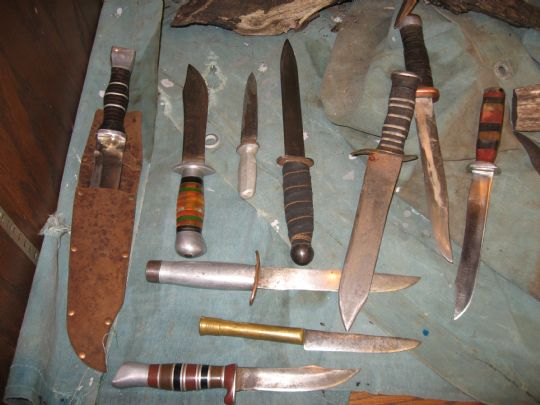 There’s a saying that necessity is the mother of invention and this is never truer than on a battlefield when soldiers often find unorthodox ways to solve problems.

Whether it was using a condom to keep water and sand out of a rifle barrel during World War II or welding metal plates to the sides of Humvees in Iraq to prevent injury from a roadside ambush, American soldiers have often found ways to overcome shortages or oversights by the military planners.

One example of such battlefield ingenuity is little known except among collectors of war memorabilia. They are the homemade knives of World War II.

An exhibit of such knives is on display through January at the Bedford Park Public Library, 7816 W. 65th Place.{{more}}

“Very few knives were issued to GIs during World War II,” said Jim Vitalo, of Willow Springs, who has been collecting homemade knives for about nine years.

“Soldiers were given bayonets, but they were only good for stabbing and not a lot else,” he said. “So the men in combat zones started making their own knives from downed aircraft parts.

Some other handles were made out of brass or bronze.

“Navy men made the best knives because they usually had access to a machine shop on ship,” he said. “They would often make them for new guys.”

Vitello said he started collecting after finding a homemade Navy knife in his father’s kit after he died.

The 66-year-old Vietnam veteran had never collected anything before, but he now owns 20-30 of the knives that saw action anywhere Americans were stationed during World War II.

“The guys would make them because they needed them and they weren’t getting any from the Army,” he said.

“There was a campaign during the war called ‘Make a knife, save a life,’ so people would send knives to soldiers the same way we send them care packages today.”

“They are a piece of the lost history of the war,” he said.

“It’s amazing where they come from,” he said.”They turn up when someone goes through a veteran’s gear and sells it or gives it away.”

Most stem from World War II but he has one that was part of World War I 1917 mess kit.

He said the knives are starting to gain in popularity and price.

“A lot of fakes are being made because prices have tripled or quadrupled since I started nine years ago.”

The exhibit is in glass cases just inside the doors to the library and it has been getting a lot of attention, said a staffer at the library.

In February, the exhibit will be on display at the Willow Springs Historical Society in the old village hall.