February 12, 2015/Comments Off on Garfield Ridge man charged in armed robbery, may be linked to more 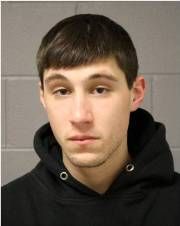 Garfield Ridge man charged in armed robbery, may be linked to more

Area Central Bureau of Detectives, in conjunction with the Chicago Lawn (8th) District, arrested a man from the Garfield Ridge community in connection with the armed robbery of a fast food restaurant in the Clearing neighborhood last Friday night.

Police said further investigation revealed that Samuel Ferrera, 23, of the 6600 block of West 59th Street, also was responsible for several other robberies committed in the area.

Ferrera was charged with seven felony counts of robbery and being armed with a firearm.

The commander said during a United Business Association meeting on Feb. 4 that the suspect originally did not use a weapon when robbing the restaurants, but then began carrying a knife and a gun. The commander suggested that restaurants and other businesses open late at night should install a buzzer system on doors as a safety measure.

During the course of their investigation, the detectives and 8th District Police employed various investigative methods, including the creation of two CPD Business Alerts that were provided to the media and surrounding communities, all in an effort to identify and apprehend the armed offender.

At about 11:35 p.m. Friday, Feb. 6, officers and detectives were conducting covert surveillance on a fast food restaurant located on the 6400 block of West 63rd Street, in an area where the offender reportedly had committed previous crimes.

Police said they observed an armed male offender enter a restaurant and announce a robbery.

The officers and detectives then immediately broke surveillance, entered the restaurant and placed the offender, who they said was armed with a knife and .40 caliber semi-automatic handgun, into custody.

Lynn Marszewski, a member and former president of the Clearing Night Force, said she was not aware of the recent series of armed robberies.

ÒBut it does make feel good that there was an arrest,” Marszewski said. ÒThat’s one less on the streets. We have good communication with the police.”

But other residents have complained about a surge in robberies that have taken place in the past month in the Clearing and Garfield Ridge neighborhoods.

Ferrara appeared in Central Bond Court on Monday. His bond has been set at $300,000, according to the Cook County Sheriff’s office. His next court date is scheduled for today (Friday, Feb. 13).