Skip to content
February 12, 2015/Comments Off on Oak Lawn mayor points to development 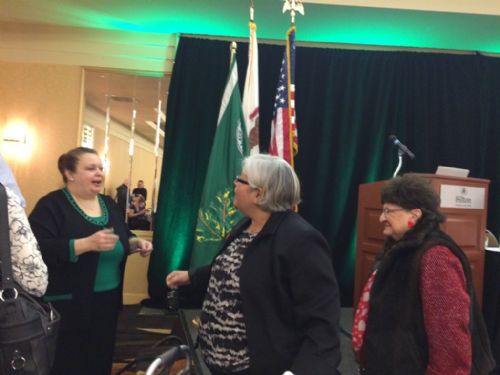 Oak Lawn Mayor Sandra Bury stressed the need to increase sales tax revenue, promoting the ÒShop Oak Lawn” theme during a wide-ranging State of the Village address given at a Chamber of Commerce luncheon on Tuesday at the Hilton Oak Lawn.

She said homes pay, on average, $436 for village services, and $24 per month on public safety, and $12 monthly for other services.

ÒThink of how much you paid for your phone last month,” she said.

The mayor said sales taxes account for 29 percent of the $54 million annual budget, about $14 million.{{more}}

ÒThat is good but it could be better,” she said, comparing Oak Lawn to Orland Park, with a similar population that takes in twice that due to the mall there.

Bury said the Oak Lawn Chamber of Commerce has 300 members, offering just about anything someone might want.

ÒWe’re committed to keeping the tax levy low,” noting that it has been going down by a small percentage in recent years.

ÒBut we need to get money elsewhere, and it can come from sales tax.”

She said the success of the Mariano’s grocery store that opened last year at 111th and Cicero Avenue bodes well for the other stores and restaurants coming to the adjacent Stony Creek Promenade. They should improve sales tax revenue.

Businesses coming to the site include a Cooper’s Hawk Restaurant and Winery, Starbuck’s, Chipotle and Massage Envy.

She said the Police Department budget is going from $16.6 million to over $18 million this year. ÒWe do want people to call the police,” she added, noting that the department fielded 58,140 calls for service in 2014, generating 7,511 reports,

The Fire Department, with a $14.4 million budget, fielded 8,188 calls, with the vast majority being for ambulance service rather than fires.

ÒWe truly need more paramedics,” she said. ÒIt is becoming more of an EMS department” in part due to the aging population.

She said unfunded pension liabilities for police, fire and other village employees keeps her up at night.

Afterward, she said eliminating things like automatic annual 3 percent raises would help solve the problem. She hopes to negotiate new contracts with the unions, but changes could be legislated also.

She said the 911 dispatch center in the village handles calls for four area police departments and six fire departments encompassing a 27 square mile area with a population of 126,000.

ÒI’m proud to say 94.9 percent of the calls were answered within 10 seconds. She said nearly 77 percent of calls were from wireless phones.