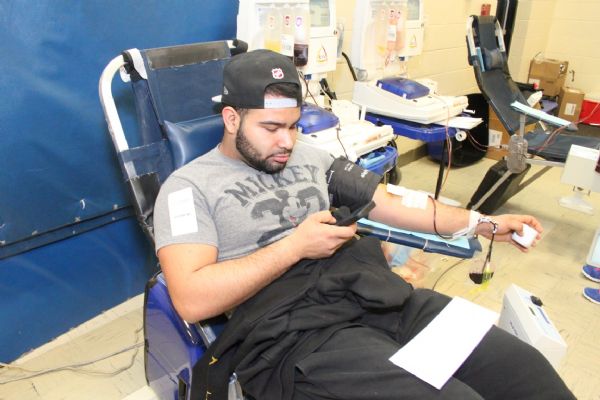 The family of 8-year-old Oliver Canales is so happy that he has won his second fight with leukemia that it held a blood drive last month to help give something back to the Bridgeview community that has been so supportive during his five-year battle with the disease.

ÒWe have nothing to complain about,” said Oliver’s mother, Rebecca Komosa. ÒHe’s back in school. He has his hair back. You’d never know there was anything wrong with him.”

It’s been a long road to this point for Oliver, who was diagnosed with the blood disease when he was 3.

ÒHe was diagnosed out of the blue,” said his mom. ÒWe were in and out of the doctor’s office. He was always sick. It was about a month before a blood test finally discovered the cancer.{{more}}

ÒWe were lucky enough to catch it at the beginning,” she said. ÒBut he had a rough time at the beginning. Not only was he fighting the cancer he was fighting a fungal infection at the same time.”

ÒHe pulled through all that” and now he’s a thriving 8-year-old student at Robina Lyle School in Bridgeview.

ÒHe’s my youngest child and he’s a firecracker,” she said. ÒIt’s a great turnaround from a year ago. He has no limitations and gets a low-dose chemotherapy once a month.”

To thank the community for its support and to pay back LifeSource for the 20 units of blood Oliver has needed over the years, his family held a blood drive recently at Lyle School.

ÒWe do a blood drive a year,” said his mom. ÒLast year, we did two and we’ll do two again this year. Probably in the summer. That’s when donations are down.”

She said last week’s drive netted about 70 units of blood. Donors each received a pint of frozen custard from the local Culver’s restaurant.