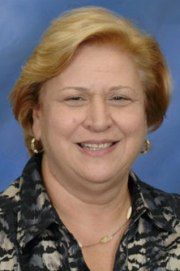 Supt. Mary Jo Vladika caught the Lyons School District 103 board unawares this week when she announced that she would forgo the remaining two years on her contract and retire at the end of the school year in June.

“After 40 years as an educator and administrator, I did some reflection and decided to retire,” she said Tuesday. “The only person who knew was my husband.”

Vladika made the announcement that she was filing her intent to retire at the end of Monday’s special school board meeting.

“I told (the board) early so they could get started on finding a replacement,” she said.

She said her request has to be officially accepted by the board at its committee of the whole meeting on April 13.

“I have five grandchildren,” she said. “And a yearning to do some university teaching.”{{more}}

She said the board has some options in finding her replacement.

“There are a lot of resources to help the board find a replacement,” she said. “The Illinois Association of School Boards will advise them on what to do.

“They could hire an interim superintendent until they find a permanent superintendent,” she said, indicating she might even stick around to help.

“Some retired superintendents come in a few days a week to fill in until the board hires a new one,” she said. “I might come in and help after June 30, so you might still be seeing me around.”

She said she had mixed feelings about her decision.

“It will be like leaving my family,” she said. “I’ll miss my five towns.”

She said she had been receiving emails from teachers wishing her well and telling her she would be missed.

“I intend to answer them all,” she said.

Vladika was hired as superintendent three years ago to replace Michael Warner after he retired. She’s been with District 103 for eight years.

She’s not the only one who announced her retirement Monday night.

Longtime superintendent secretary Marge Hubacek also announced that she would be retiring at the end of June.

She said the biggest thing she was looking forward to was “never having to set my alarm clock again.”

“I have a lot of activities,” she said.

George Washington is the largest school in the district, which takes in about 2,600 students from Lyons, McCook, Stickney, Forest View and Brookfield.

“My new job is closer to home and I’ll be able to be more active with my daughter, who’s in middle school,” said Billingsley, who lives in Orland Park.

Billingsley has been at George Washington for four years. He moved over from Bloom High School in Chicago Heights.

The district is the scene of a hotly contested school board election on April 7 with 12 candidates seeking four four-year seats and one two-year seat on the board.

ÒThis is a wake-up call to the district,” said school board candidate Katie Broderick, who is seeking the two-year seat against Earl B. Johnson. “That’s why we need leadership now and the voters can bring this chaos to an end on April 7.”

Broderick is running with newcomers Mike Bennett, Rene Torres, Dawn Shipbaugh and Greg Ramirez, who are seeking the four-year seats.

Also on the ballot are incumbents Kristen Goodman, Connie Esparza and Joanne Schaeffer along with newcomers Lori Schuler, Antonie Parker and Jacqueline Macdonnell.