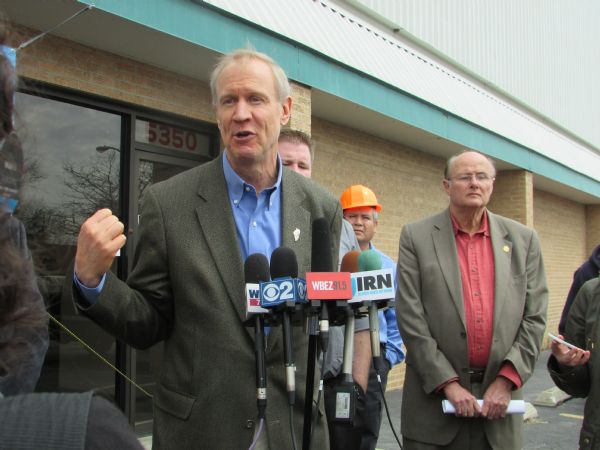 Gov. Bruce Rauner stopped in North American Warehousing Co. in Bedford Park on Monday as part of an ongoing tour to discuss his ÒIllinois Turnaround” plan in communities around the state.

ÒIllinois is a great place, to live and work, but we’ve had some failure in state government” said the governor, who was joined by company officials and Bedford Park Mayor Dave Brady for a tour of the facility at 5350 W. 70th Place.

NAWC President Roy Phillips told Rauner the company employs about 47 people, and has another facility at 6800 W. 68th St.

ÒCompanies like this want to expand, but they are hampered by business costs that are much higher than surrounding states,” said Rauner. He explained that his proposed legislation is divided into four groupings: pension reform; economic growth; governmental reform; and conflict of interest and ethics reform.{{more}}

With Roy Phillips and his son, CJ Phillips, the operations manager standing beside him and nodding in agreement, Rauner said that Illinois’ workers compensation costs are among the highest in the country, and must be brought down to compete with surrounding states.

ÒMy No. 1 priority is to make sure job creation is going to improve, and you can get the bigger bonuses you deserve,” said Rauner to the workers gathered nearby. In addition to workers compensation, Rauner is also calling for reforms to Òrein in frivolous lawsuits,” and Òcommon sense changes” to the unemployment insurance program.

If the legislation affecting businesses is adopted, Rauner is calling for a gradual increase of the minimum wage from $8.25 this year to $10 an hour in 2022.

ÒGov. Rauner’s proposals are mostly pro-business, which would be good for us,” said Roy Phillips.

But for future work, he wants to move current employees and future employees covered under the four state pension systems into a Tier 2 system as of July 1 of this year that he said would save the state more than $2 billion.

In addition to limits on annual increases and other changes, employees would be offered a pension buyout and enrollment in a defined benefit program similar to a 401k.

The governer’s plans also include property taxes being frozen at 2015 levels, and only raised by referendum, as well as giving municipalities more control of collective bargaining agreements.

ÒWe need real competitive bidding. We have to get rid of sweetheart deals. And I want to give mayors control of what is collectively bargained,” said Rauner, adding that he would like to see the necessary legislation passed in the next four months.

Asked if he was expecting too much in too short a time, Rauner said he has developed a good working relationship with state legislators on both sides of the aisle, and believes they can work together to accomplish it.

ÒThey all know we need pension reform. I am optimistic about getting that done this year,” Rauner said.

Asked about his recent decision to freeze $26 million in grant money for social service programs, Rauner said that some of the money will be restored.

ÒThe reality is, we were wasting a lot of money,” Rauner said. He added that a management team in his office is studying the grant programs now.

ÒIt is a process we have to go through,” said Rauner, saying some of the grants may be restored within days, while others programs might have to wait months to see if the decision is final.

Some observers, including state legislators, have said that some of Rauner’s plans are good, but items regarding collective bargaining and putting all freezing property taxes to a referendum are unrealistic.

ÒThe governor met with all the cogs (in the system),” said Brady, explaining that Rauner has been discussing his plans with regional groups, including the executive board of the Southwest Conference of Mayors, which Brady sits on.

ÒThat is the first time a governor has come to us (to discuss his plans),” said Brady. Mayor Gerald Bennett of Palos Hills heads that executive board, which also includes Mayor James Sexton of Evergreen Park and Mayor Bob Straz of Palos Heights.

Brady said Rauner’s proposals will be discussed at an upcoming Southwest Conference of Mayors meeting.