Skip to content
May 14, 2015/Comments Off on Getty elected president of the West Central Municipal Conference 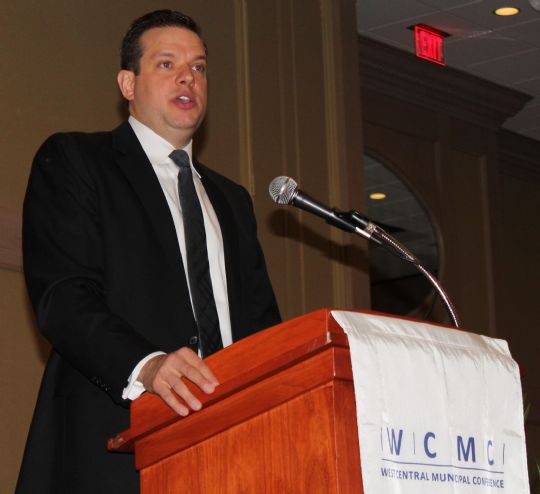 Getty, who has been chief executive of Lyons since 2009, succeeds Harwood Heights Mayor Arlene Jezierny, who was honored at the meeting along with several regional mayors for public service.

Getty was nominated by the WCMC membership in a large part because of the achievements he has had during his six years as mayor of Lyons. He was elected last year as WCMC vice president and also served as its legislative chairman.

ÒOver the past two terms, we have done a tremendous amount of work in Lyons to bring the community together, to fight crime, to address the challenges of shrinking revenues and expanding services, and to continue to provide services to our residents, our seniors and our families,” Getty said during his acceptance speech.{{more}}

ÒThis year we as communities and as a conference will face challenges and venture onto new ground, but this is all a part of continuing the process of growing our communities and this vital organization. The WCMC will continue to enhance and foster intergovernmental cooperation among its members and we will continue to bring you the quality service you deserve.”

Nearly 500 people attended the formal dinner banquet at the Donald E. Stephens Convention Center in Rosemont, where officials and members celebrated the achievements of several other municipal and government leaders including Cicero Town President Larry Dominick, who was honored for his unique and expansive services to senior citizens, and 16th District Cook County Commissioner and McCook Mayor Jeffrey Tobolski, who was recognized for his efforts with intergovernmental cooperation.

ÒI am honored to follow in the footsteps of Arlene Jezierny and in the footsteps of many great mayors who have worked so hard to make the West Central Municipal Conference the voice of our region,” Getty said after introducing the new WCMC executive committee.

ÒAs our new president, I will work hard to represent the interests of all of the municipalities and suburban communities that this great organization represents. The West Central brings together so many different communities. From here in Rosemont all the way down to the Village of Willow Springs in the south. Virtually every suburb west of the City of Chicago is represented within the WCMC. I come to this position with a willingness to serve as I have in my own community the Village of Lyons.”

ÒIn his 10 years in office, President Dominick has quietly gone about refacing the Town of Cicero with new economic development and new programs for children and senior citizens. His programs and anti-crime initiatives has made Cicero a great environment to live and raise a family. What is most remarkable is that President Dominick has created the ‘New Cicero’ without raising taxes and while shrinking the town’s debt. For those of us that know Larry Dominick and how much he cares about the residents of Cicero, it’s rewarding to see him recognized for his hard work.”

In accepting his award, Dominick said, ÒI am proud to receive this honor from the West Central Municipal Conference. This organization provides enormous support to the communities in the West Suburbs and is a voice for advocating for the needs of our residents and taxpayers. I’m proud to be here and will continue to serve my constituents expanding services during these times of tight budgets for our youth, our families and especially our senior citizens who have worked so hard to support their communities.”

Tobolski received the Jack Williams Intergovernmental Achievement Award for his efforts to advance regional government cooperation. The award is named in honor of former Franklin Park Mayor Jack Williams who distinguished himself during his 40 years of public service.

ÒIntergovernmental cooperation is the hallmark of the WCMC. The ties that bind West suburban government and civic leaders are powerful and resilient. It is with the spirit of kinship I present the Jack Williams Intergovernmental Award,” Getty said.

Getty was joined by officials from the Village of Lyons and by his family including his wife Kristen, who recently gave birth to the couple’s first child, Isabella, and Getty’s parents, former Lyons Mayor Kenneth Getty and Mrs. Anna Getty, and his brother Kenneth Getty.