May 22, 2015/Comments Off on Central Avenue renovation in Oak Lawn is complete 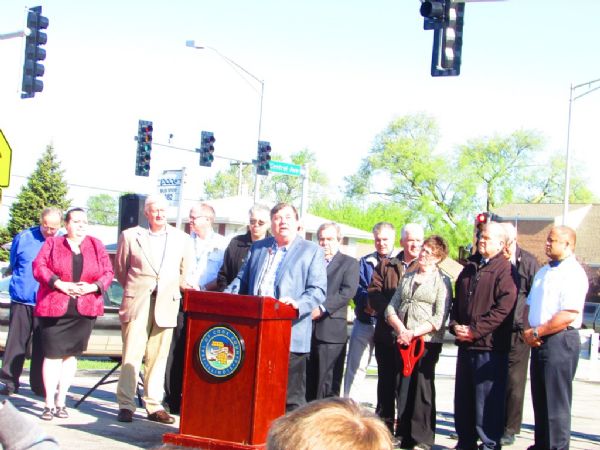 St. Gerald alumnus Brian McCarty waited 48 years to see the renovation of the Central Avenue and Southwest Highway intersection, and came back from Australia to celebrate its completion with current students and Oak Lawn and Cook County officials on May 13 outside the school at 9310 S. 55th Court.

Central and Southwest Highway had been both two-lane roads in each direction at the intersection, which was notoriously dangerous for years, especially for cars stopping to make turns.

According to Cook County President Toni Preckwinkle, who joined local officials and Cook County Commissioner John Daley (D-11th) for the ribbon-cutting ceremony, more than 100 crashes have occurred there over the past decade.

But there were problems there for many years before. In 1967, McCarty was a 13-year-old student at St. Gerald riding his bike through the busy intersection next to his school when he was struck by a speeding car and badly injured.{{more}}

ÒI was on my bicycle and I was hit by some aggravated driver going 44 mph,” he said. McCarty, who lived on nearby Moody Avenue at the time, said he received 176 stitches in his face following the crash, as well as a broken leg and other injuries.

McCarty, now 60, fully recovered, and went on to a long career in Hollywood working on more than 40 movies, mainly as a sound engineer and music arranger. He has been nominated three times for Oscars for his work on movies that included ÒThe Big Lebowski,” ÒNaked Gun,” and ÒRobin Hood: Men in Tights,” among others.

Ò(The accident) was a career-building moment,” he said wryly after the ceremony.

But he and his family, many of whom still live in Oak Lawn, never forgot about the danger of that intersection. Trustee Alex Olejniczak (2nd), who grew up on the same block as McCarty, said he has been working on getting the intersection improved since he was first elected 10 years ago, in 2005.

Olejniczak said that after hearing about his efforts, McCarty sent him an email telling his story, which the trustee kept in his wallet to remind him of the importance of the task.

ÒWe’re very happy that it is complete. It is not just for my district but for all of Oak Lawn and the whole area,” said Olejniczak. He credited Daley for taking a personal interest in the project, thanking him for his Òprofessionalism and concern, and for listening to a newly elected local trustee.”

ÒIt shows that government can work,” said Olejniczak. A work commitment prevented him from attending the ribbon-cutting ceremony, but his sons Zach and John filled in, helping cut the ribbon along with Preckwinkle, Daley, Mayor Sandra Bury and Trustees Tim Desmond (1st) and Terry Vorderer (4th), and St. Gerald Principal Al Theis.

ÒWe’re here in celebration of teamwork and cooperation,” said Bury of the project funded by the county.

Preckwinkle agreed, saying, ÒThis is a great example of when units of government work together.” She noted that the county has spent $3.3 million on various Oak Lawn projects in the past five years.

ÒI think we were safer in these last six months (while the renovation work was underway) than at any time before,” said Theis. He thanked the county officials for working so closely with the school and parish to ensure the safety of the children and their families who use the intersection daily.

ÒWe’re just grateful that this was done, especially that they replaced our trees,” said the Rev. Lawrence Malcolm, pastor of St. Gerald, pointing out the newly planted saplings on the rebuilt parkway along Central Avenue.