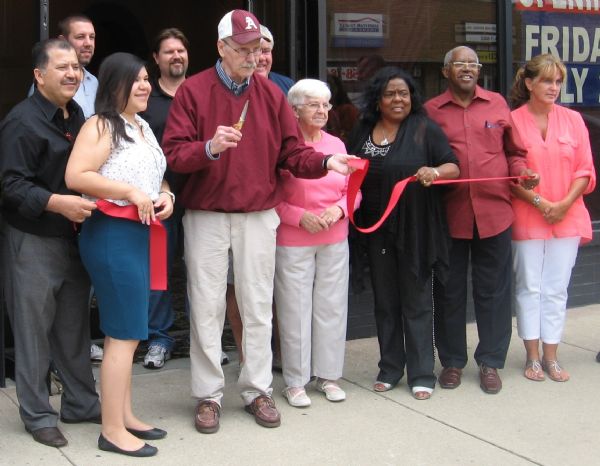 Joseph W. Strzelczyk, who entered public office as a Summit Village Trustee in 1990 and was elected mayor in 1997, died Sunday morning at home surrounded by family and friends.

Strzelczyk, 75, waged a battle against cancer during the past year but told a public meeting that while he would fight the disease he would continue to also fight for the rights and needs of the 12,000 residents of the Southwest suburban hamlet.

Last week, Strzelczyk, who was called ÒMayor Joe” by residents, agreed to take what he hoped would be a temporary leave of absence, and he endorsed the nomination as the temporary President Pro Tempore veteran Summit Trustee Sergio Rodriguez, who has served as trustee in 2005.{{more}}

ÒWe knew Mayor Joe was facing a tough fight but Mayor Joe was a tough person and we all hoped that he would overcome his health challenges,” Rodriguez said Sunday.

Dr. Marvel McCain Parker, who has worked at various Village of Summit positions before joining the village board as a trustee, praised Strzelczyk’s years of service and said the community as a whole will mourn his loss.

ÒSince 1997 I have been honored to be a member of the administrative team of Mayor Strzelczyk, as Director of Community Development, Enterprise Zone Administrator and as a Trustee,” Parker said.

ÒHe was a man of honesty and integrity. His love for the Village of Summit and its residents was unquestionable as was my loyalty to him. His primary objective was to bring diversity and transparency to the Village government. The legacy of his reign as mayor will be unmatched.”

Sergio Garcia, who was elected to fill a vacancy as village clerk this past April, said that he is stunned by the loss of his good friend.

ÒMayor Joe insisted on being involved in running the village right up to his passing because public service was his lifeblood. He was constantly on the phone talking about organizing spring cleanups in the village, the performance of the village departments, and just hated not being able to be present at every board meeting,” Garcia said.

ÒI told him he needed to focus on getting better but he said that his first priority was the well-being of Summit residents and he just wouldn’t let go. That’s the way he was. He has been in public life serving the residents of Summit for a quarter century and it just wasn’t in him to turn his back on them, even to care for himself.”

Bill Mundy, who has served as Building and Public Works director under Strzelczyk, said he was in shock.

ÒEveryone knew that Mayor Joe was facing the health fight of his life but you had to admire him for refusing to just surrender to it and abandon the one thing he loved more than even life, this village,” said Mundy, who also serves as the Lyons Township Supervisor.

ÒMayor Joe will be remembered by Summit residents as a champion of their needs. He was just talking about attending the next board meeting just to address the community and tell them how much he has enjoyed service here and that his absence would be temporary.”

Earlier this month, the Summit Board of Turtsees also voted to name Setki A. Dardovski as a new village trustee succeeding Steve Memishi, who resigned from office. At the meeting, Garcia was also sworn-in as the new village clerk, and newly elected Trustees Aleco Julius and Karen Wasko were sworn in along with re-elected Trustee Tyrone Modiest.

Strzelczyk is best known as a Òteam player” who spent much of his life working with young people as a baseball coach. That passion to help others moved him to enter public service.

Strzelczyk’s public service began in 1978 working as a special recreation instructor for the Chicago Park District.

ÒMy background gives me a wide range of experience that helps me as the Mayor of Summit to maintain the village as one of the best in the Chicagoland suburbs.”

But before that, Strzelczyk launched his own business as a young man working as a self-employed Òtrader” at the Chicago Board of Options Exchange in 1976 where he also owned a prestigious Trading Seat.

Strzelczyk also worked as a writer, authoring a column in 1985 on softball and sports for the Daily Southtown, and writing columns in 1987 for the popular Chicago Softball Magazine.

Mayor Joe also hosted the popular ÒLet’s Talk Softball” on Cable TV for Jones and Multimedia and Metrovision cable systems, and was a sports commentator for 1570 AM sports radio’s ÒMiller Sports Report” in the 1980s. He also coached for the North American Pro Softball league in 1980.

Strzelczyk always said he was proud of helping to make the Village of Summit a pro-union labor environment and reducing the village’s debt, making the village profitable for the first time in two decades.

He also worked hard to bring new businesses to Summit, saying Òa key to the community’s success making people believe that they can achieve what they seek and also that we can fight and defeat crime.” During his term in office, crime made a steady decline.

Over the years, he has secured more than $2.5 million in Community Development Block Grant (CDBG) funding which he has used to improve streets and strengthen the village’s infra-structure. In 2001, under his direction, Summit was able to bring in a 78-unit, $14 million Senior Housing Development.

In 2013, Summit was included in the revenue sharing agreement with the Rivers Casino in Des Plaines which this year brought in more than $604,000 in added revenue to off-set the burden on taxpayers.