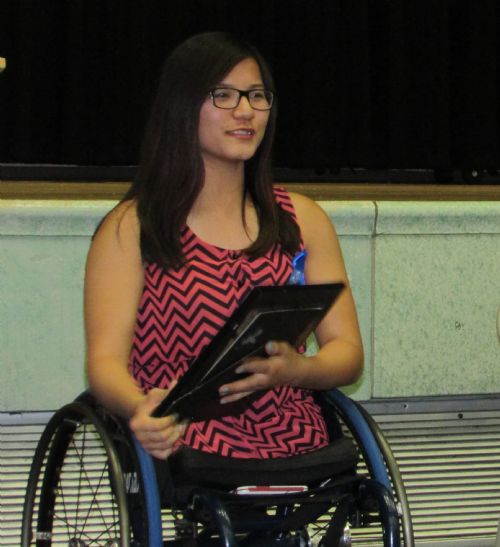 Stella, a wheelchair athlete and honor student who is going into her senior year at Kennedy, was joined by her parents, Brian and Jen, and older sister, Michelle. The meeting was held at Kennedy High School.

Being born without legs did not stop her from competing in multiple adaptive sports, including basketball and track and field. She is a seven-time state champion in track and field, and is the current record-holder in the shotput, discus, and 100-, 200- and 800-meter races.{{more}}

ÒHer determination and dedication is an inspiration to us all,” said GRNW President Al Cacciattolo.

ÒI believe everyone has a disability or flaw of some kind, and it is the way we overcome them that makes the difference,” she said, adding that being an inspiration to others is what keeps her competing.

Cacciattolo said that GRNW will be donating $250 in Stella’s name to U.S. Paralympics Team, which she hopes to be competing on in the near future.

Terrence L. Tabb, patrol commander of the Cook County Sheriff’s Police’s Bridgeview District, one of four districts in the county, also spoke to the group, as did Penny Matek, community affairs coordinator of the Sheriff’s Police Department.

Tabb explained that Cook County officers in the Bridgeview district are responsible for unincorporated areas such as Central Stickney Ñ an area adjacent to Garfield Ridge, between 47th and 51st Streets, from Central to Laramie Avenue. Nottingham Park, bordered by Bedford Park, Bridgeview and Burbank on the east side of Harlem Avenue between 71st and 73rd Streets, is also in the Sheriff’s Police Bridgeview jurisdiction.

ÒThis (Bridgeview) District is called the country club,” said Tabb. He said there had been a problem with gangs in Central Stickney a few years ago, but now, ÒIt’s pretty much crime-free,” he asserted, aside from occasional complaints about graffiti. Therefore, he said, many of his officers are assigned to Òhot spots” in Chicago, particularly on Tuesday and Wednesday nights.

ÒChicago has lot of issues,” he said. ÒOur officers make 50 to 60 arrests per night, and a lot of guns are taken off the streets,” he continued, adding that Garfield Ridge is not one of the problem areas.

Responding to a question about crime should be reported in unincorporated areas, Tabb said 911 should be called for immediate threats or suspicious activity, or (847) 635-1188 for non-emergency situations.

Sandoval spoke briefly about the ongoing budget problems in Springfield, and handed out certificates of recognition to the GRNW board members.

ÒYou are the premiere neighborhood watch program,” he told the group. ÒNo one has the right to destroy your neighborhood.”

Sandoval also passed out blue lapel ribbons to show support for police, who he said have been unfairly Òvilified” nationally in recent months.

Noting that he was heading back to Springfield the following day for a special session of the Legislature, he called the budget crisis Òreally quite disgusting.”

He said Chicago cannot afford to pay Chicago Public Schools pension payments due July 1, and CPS schools may not open on time in the fall if money is not found. Sandoval said Mayor Emanuel asked the Legislature to change the payment due date to Aug. 15, to allow more time for the budget to be sorted out.