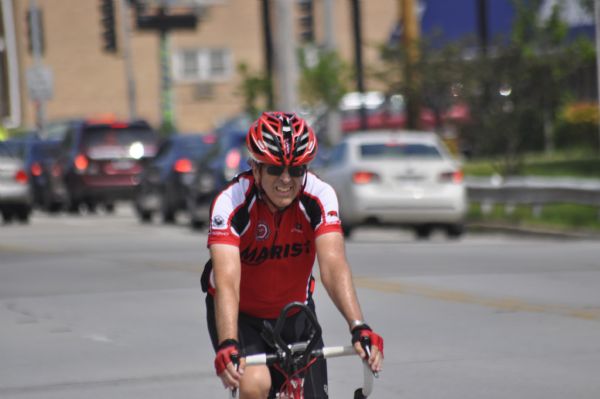 One Marist High School teacher has taken cycling to a whole new level.

Owen Glennon, a Marist math teacher since 1976, biked from a Marist facility in New York to Marist High School in Chicago in an attempt to raise $40,000 to benefit the school during his 40th year of teaching.

He raised $60,000, according to Principal Larry Tucker.

With a police escort, Glennon pulled up at 3 p.m. Sunday at the school — about a half hour before expected. Some friends and family — including his parents — missed seeing him pedal the final leg of the 1,000-plus mile journey but as the day wore on, more than 100 well-wishers joined him in the school cafeteria for a celebration after the two-week journey.{{more}}

It was sunny and humid upon the Orland Park resident’s return to Chicago , which was a departure from his departure in New York.

It was pouring rain on Glennon when he left from the Marist Brother Retreat in Esopus, N.Y., June 28 and the dreary weather followed him for a lot of his trip as well.

ÒThere were a lot of cold and rainy days where it’s tough to get motivated,” he said, ÒBut this wasn’t a vacation; I had to get up and keep moving. You can’t get from point A to point B without getting up and moving every day.”

Glennon referred to this trip as a “Marist cycling adventure” that took him through rural towns in southern New York, western Pennsylvania, northern Ohio and northern Indiana. However, the trip did not start out that smoothly, as a bat made its way into Glennon’s room during a stay in Nelsonville, N.Y., resulting in eight rabies shots from four different hospitals along the way of his cycling adventure.

As he rode, he reflected on the Catholic culture that spans the many miles from Esopus to Chicago.

Along the way, he stopped at 15 Catholic churches and shrines including the Marist Brothers’ Cemetery in Esopus, Our Lady Seat of Wisdom Chapel at Marist College, the Basilica of the Sacred Heart at Notre Dame and the Shrine of Christ’s Passion in St. John, Ind.

Glennon’s ride is a fundraising effort for the school’s endowment and will help deserving students in need of financial aid attend Marist.

His over 1,000-mile cycling journey started at Marist Brothers’ Retreat Center in Esopus, New York on June 28 and ended with a welcome home ceremony in Chicago and he and his wife, Carlin, were surprised when Marist bosses announced there would be a scholarship named in their honor.

ÒMy motivation going on 40 years at Marist High School was to help students in financial need,” Glennon said, ÒAs many of 30 percent of our students are in need of financial assistance. Marist is such a wonderful school that includes life changing moments that shape who both students and faculty are along the way. I would hate for a student to begin school at Marist and have to transfer because of a financial reason and miss out on all of the opportunities Marist has to offer.”

The money has been raised mainly through online donations through 41 of the school’s graduating classes consisting of alumni, students, parents, and faculty members. About 85 percent of the donations have been online. The donations go into the school’s endowment fund, and money will be drawn annually and awarded to a deserving student who has demonstrated a financial need, according to Marist High School’s Director of Marketing and Communications, Patti Arvesen.

ÒI find it inspiring that a teacher cares about his students enough to want to reconnect with them, even after 40 years,” Marist student, Rachel Ulaszek, 17, of Palos Heights, said. ÒHe is inspiring to all of his students. He’s the only person I know who can teach us math, a great story, and an important life lesson all in one class period.”

ÒHe has such a pure love of his subject area. Math is an integral part of him, and that passion has inspired thousands of students over the years,” Arvesen said, ÒHe is also deeply committed to his faith and sees himself not just as a math teacher, but very specifically as a Catholic school math teacher. He also has a very distinct, dry sense of humor he shares with his students.

ÒThis cycling adventure is a physically exhausting and impressive feat, and certainly deserving of a celebration,” Arvesen added.

ÒMoreover, for Owen to use this trip as a way to support the school and its students is such a testament to his dedication to his vocation as a teacher and to the mission of Marist. And, without a doubt, that deserves recognition.”