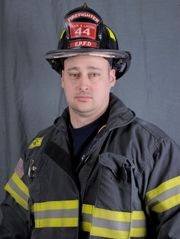 Fire departments and communities from Evergreen Park to Palos Park are mourning the loss of Chicago firefighter/paramedic Daniel Capuano, 42, whose wake is being held today at St. Rita High School in Chicago, followed by his funeral tomorrow.

In addition to being a 15-year veteran of the Chicago Fire Department, where he was assigned to Tower Ladder 34 in the South Chicago neighborhood, Capuano also was a part-time Evergreen Park firefighter for the last 16 years.

The former resident of Palos Park, who began his career with the Palos Fire Protection District based there, was killed while battling a blaze in a vacant Chicago warehouse early Monday morning.

Chicago Fire Department officials said Capuano was searching through thick smoke on the second floor of the building when he suffered fatal injuries, falling through an unmarked elevator shaft in the warehouse.

According to city officials, illegal work, including removal of the elevator, was being done in the building without permits.{{more}}

He was taken by ambulance to Advocate Christ Medical Center in Oak Lawn, where he was pronounced dead.

ÒIt’s a very sad day here,” Evergreen Park Fire Chief Ronald Kleinhaus said Monday. ÒThis is the first time something like this has happened to us.”

Kleinhaus and other members of the department had just returned from a visit to Capuano’s wife, Julie, a Chicago Public Schools teacher, and their three children in their nearby Mount Greenwood home. Their daughter, Amanda, 16, attends Mother McAuley High School, while Nick, 12, and Andrew, 13, are students at Queen of Martyrs School in Evergreen Park, a few blocks from their house.

ÒIt has been very, very rough here,” said Queen of Martyrs Principal Kathleen Tomaszewski. ÒWe’ve had two parents pass away in the past week.”

In addition to knowing the Capuanos through the school, Tomaszewski grew up with Julie Capuano in Chicago’s Wrightwood neighborhood.

ÒIt is very sad. They are a very faithful, very wonderful family,” she said.

ÒDan got his start with us,” said Palos Fire Chief James Graben . “He went through our fire academy and EMT training here.” Capuano stayed with the department for about eight years.

ÒIt’s devastating news for all of us,” said Graben, a 35-year veteran of the department who remembers working with Capuano himself. He noted that his parents, Michael and Jacqueline Capuano, still live in Palos Park.

ÒWe’re all affected by this tragic loss. A lot of our guys go on to other departments. Many who are here now also worked with him in Evergreen Park, too,” he explained. He noted that prior to going to Evergreen Park, Capuano also worked for the Lemont Fire Department.

While there, Capuano was one of four paramedics credited with saving the life of a caddy on the 15th fairway Cog Hill Golf Course, using a portable defibrillator to restart the man’s heart.

In addition to his wife, children and parents, Capuano is also survived by two brothers, one of whom lives in Palos Heights.

His wake is scheduled from 3-9 p.m. Thursday at St. Rita High School Chapel, 7740 S. Western Ave., Chicago. The funeral will be there at 10 a.m. Friday, followed by interment at Holy Sepulchre Cemetery.

Chicago Fire Fighters Union Local 2 and the Ende, Menzer, Walsh & Quinn Retirees’ Widows’ and Children’s Assistance Fund have established a memorial fund to benefit the family at BMO Harris Bank. The bank’s locations are accepting cash or check donations from customers and the general public.