February 24, 2016/Comments Off on Summit School District 104 board member Frank Geraci dies at 64 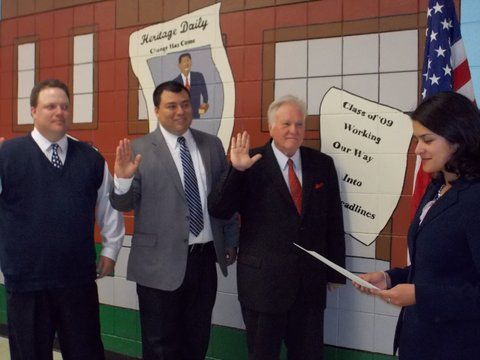 Frank Geraci, 64, of Bedford Park, a member of the Summit School District 104 Board of education died suddenly Saturday.

Mr. Geraci was born in Sicily and came to the United States as a young boy.

“He had to make his way as soon as he arrived,” said his wife of 27 years Cynthia.

He was a licensed barber as a teenager, his wife said, before he discovered a lifelong interest in politics.

“He started in the 12th Ward,” she said he worked for a variety of Democratic candidates including the first Mayor Richard Daley and U.S. Rep. Bill Lipinski. “He was really involved in politics.”

She said his involvement with the Democratic Party included a stint as chairman of the Cook County Young Democrats.

In the 1980s, he became interested in real estate sales and at one time operated three Century 21 offices in the southwest suburbs.

His wife said they moved to Arizona in 1994 and lived there for 17 years. While there she said the couple tended to both of their mothers when they became ill.

“He took care of everybody,” she said. “If you showed up at the door, he would take you in. He was that kind of guy.”

She said they moved back to the Bedford Park area and he immediately became involved in local politics again. He became a Democratic precinct captain.

“He packed a lot into his life,” his wife said.

“His death was a shock to all of us,” said District 104 Supt. Troy Whelan. “We were very surprised to hear that he had died. He was a good board member. He cared about the students and the community.”

“He was instrumental in guiding and shaping our STEM program.”

“He brought his life experiences to the board and he made the board stronger as a result,” Whelan said.

Whelan said the board has 45 days to name a replacement to the school board.

Survivors include his wife, Cynthia; a sister, Nicolina (Jack) Alfonso; many nieces and nephews.