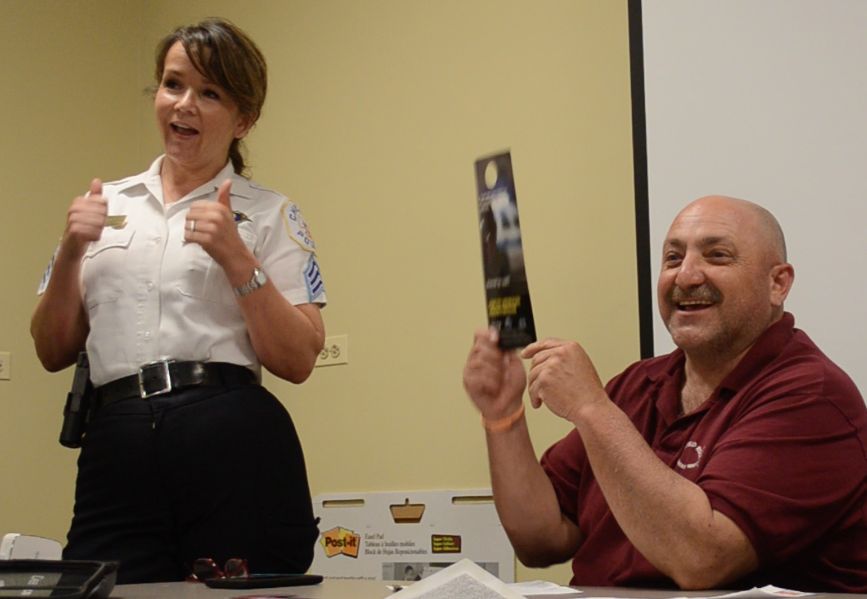 Just as the springtime beauty of daffodils is accompanied by

blooms of unwanted dandelions, so too is the joy over mild weather tempered

with concern over the seasonal resurgence of petty crime, members of the

“As we move forward into spring and enjoy the outdoors, we should

place where crime is relatively low and the quality of life is high,” said GRNW

The admonition came at the GRNW’s monthly meeting, held Monday

Garfield Ridge consider a seasonal nuisance, judging by comments at

neighborhood meetings in recent years: men walking up and down local alleys and

The leaflets typically tout the services of small home-improvement

“These guys use tape, and often when you remove the flyer, your

garage’s paint comes off with it,” Cacciottolo said, adding that some of the

In his position as 23rd Ward superintendent for the Chicago

Department of Streets and Sanitation, Cacciottolo said he helps enforce a city

“We are issuing citations because we are fed up,” he said. “It’s

the same thing over and over. I’ve explained to these guys that they’re wasting

their time and money by putting these flyers up–because we pull them down.”

Cacciottolo added that he has drafted students from Kennedy High

School to help pull the leaflets down.

“These kids are on detentionÑand they need to get off detentionÑso

they need to do community service hours, so I’ve got them going up and down the

alleys,” he said. “Hopefully, in the next day or so, we’ll get them all taken

down. I’ve gotten four bags of these things from the kids.”

CPD CAPS Sergeant Randi O’Carroll, at the meeting as an invited

leaflets to garages should call 911 immediately and give an accurate

description of the worker, including location and in what direction he is

Garfield Ridge residents are also invited to call the GRNW’s

Other heightened concerns related to warmer weather discussed at

everyone to pay special attention to Dunkin’ Donuts and 7-Eleven, which some

¥ Teenagers hanging out at The Pit, an area along the Belt Railway

anyone trespassing on railroad property are encouraged to call 911 immediately,

¥ Kennedy High School students and the potential for mischief.

“There aren’t [crime-related] issues with Kennedy students right now, but when

school gets out at 2:45, there’s an abundance of kids,” Cacciottolo said.

Mulligan, where many Kennedy students board CTA buses). So let’s be out there,

be visible, let them see you, they know the red shirt [of the GRNW].”

The popular event is essentially a community garage sale. Those

visit garfieldridgenw.com. This year, vendors (such as Avon, Tupperware and

more) are invited to be a part of the mix. Volunteers are also needed to

promote the event, as well as staff it.

Proceeds from the event will be earmarked for several charitable

of the Southwest News-Herald. Want to get the all the news? Pick up the

Southwest News-Herald on local newsstands for just 75 cents a copy. For greater

order a subscription by mail, delivered each week to your home or business.