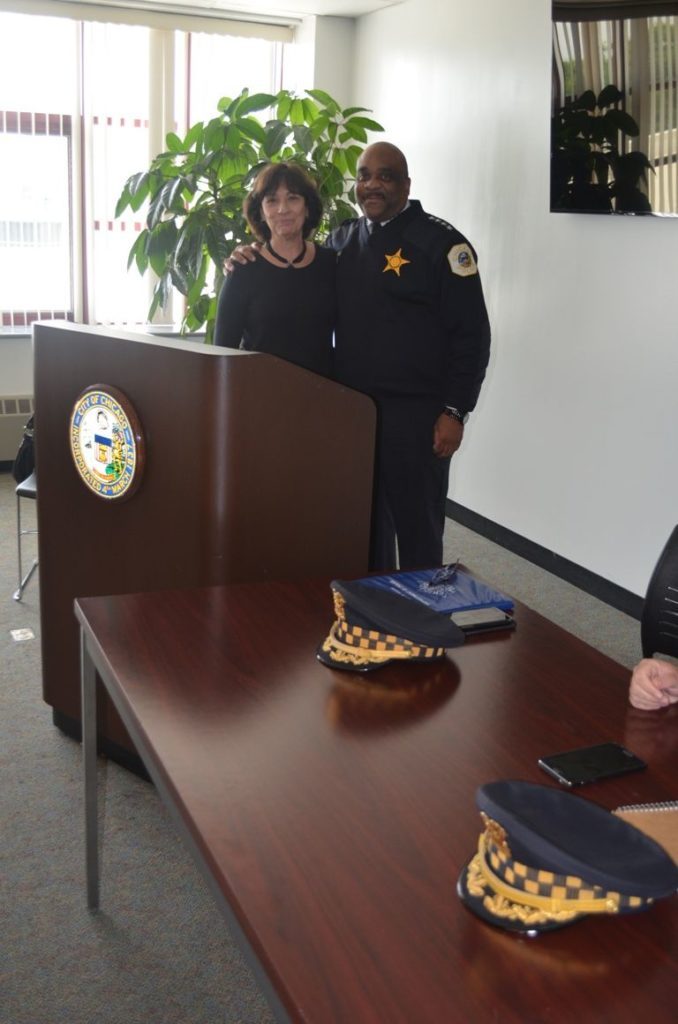 Additional police resources are on the way to the Chicago Lawn (8th) District, Chicago Police Supt. Eddie Johnson told a group of business owners at a recent meeting at Midway Airport.

Saying he knows that the Eighth District is one of a few city districts that have been Òwoefully understaffed,” Chicago’s new top cop pledged that when the next wave of newly hired officers comes out of the academy, ÒYou’ll get your fair share.”

He predicted that the new resources would start arriving late this year, and by the spring of 2017, district numbers will be Òbumped up quite a bit. You’ll see the difference.”

He also praised Mayor Rahm Emanuel for making a commitment to prevent police ranks from shrinking by attrition.{{more}}

The superintendent made his remarks as an invited guest of the United Business Association of Midway. About 20 UBAM members and guests attended.

Johnson did not offer any specific numbers on how many new officers would be deployed to the district, but he did appear to indicate a commitment to maintaining the Òbeat integrity” in the district’s west endÑa strategy first implemented by the late Commander John ÒKup” Kupczyk that requires beat cars in Garfield Ridge and Clearing to remain in place and not be re-deployed to hot spots elsewhere in the district.

ÒI will make sure that they don’t strip people from over here,” Johnson said.

The superintendent’s statement was part of an answer to a question posed by UBAM member Al Cacciottolo, a Garfield Ridge resident, business owner and president of the Garfield Ridge Neighborhood Watch crime fighting organization.

ÒIt was good to hear, and I look forward to seeing what happens,” said Cacciottolo. ÒGarfield Ridge is one of the best and most peaceful neighborhoods in the city, and we work with police every day to keep it that way. Beat integrity is very important to us. Our police are awesome, and we need them here.”

Also at the meeting, Johnson answered a question posed by UBAM Executive Director Anita Cummings about community policing by saying that reductions made to the CAPS program in recent years Òinadvertently cut the ties of the Police Department to the community” by reducing district-level CAPS staff from about 12 down to three.

Johnson said the move was made as part of City Hall’s drive to put more police on the street. ÒIf you don’t have money to hire police, you have to take police from somewhere,” he said. ÒIt was thought that maybe community policing was not as important as we thought it was.”

The superintendent said that CPD plans to restore the CAPS program Òto where it was” before the cuts, adding that Òthe finishing touches” are being put on a new plan that will be unveiled soon. He did not discuss staffing levels or how any increase would be paid for.

Another initiative coming in the weeks ahead may relate to stiffer mandatory sentencing of criminals.

Johnson said he has been meeting with legislators and representatives of the judicial system to put together a package that he said will strengthen sentencing and send a message to gang members and others who commit violent crimes with guns.

ÒIn a city of 2.7 million people, just 1,300 to 1,400 people are driving the violence,” Johnson said. ÒHow do we know that? We use computer software with algorithms to generate a listÑthe Strategic Subject ListÑto determine who’s going to be a perpetrator of gun violence or a victim of gun violence.

The accuracy of the predictions Òtells me we are identifying the right people,” Johnson said. ÒSo you might ask, ‘Well, Superintendent, if you know who they are, why are they still out there, doing what they’re doing?’ I’ll tell you why. The police do a good job of identifying these people and arresting them. The problem is, our judicial system doesn’t hold them accountable. That’s where we’re dropping the ball. Most of these individuals are repeat gun offenders that we are too lenient on.”

Chicago Òwill never, ever arrest our way out of this situation,” Johnson added. ÒIt’s impossible. We can arrest a thousand of them a day, and that’s not going to resolve the issue.”

Johnson said the city Òwill not see a reduction in this gun violence until gangbangers know we are serious. We must hold them accountable and say, ‘Hey, you commit a gun crime, you’re going away for three years. Period.’ Until that day comes, they will continue to do what they do.”

The superintendent said that when the new get-tough package is unveiled Òpretty soon,” he will count on UBAM members and all Chicagoans to contact their legislators and urge them to support it.

“We were so pleased that the new superintendent took the time to meet with UBAM members, not only to address our concerns but also to share his vision for the city under his leadership,” she said. “Most noticeable was his understanding of the challenges facing the members of the Chicago Police Department. The fact that he is a long term, Chicago law enforcement officer gives him tremendous credibility. He knows what officers face and the appropriate way to deal with any and all situations. I believe we have definitely selected the ‘right man’ for this extremely difficult job.”