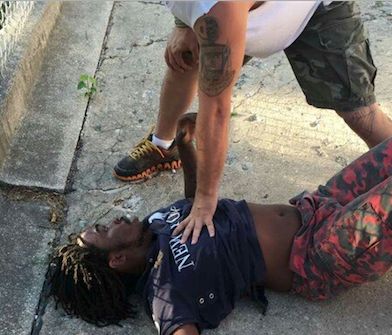 The retail thefts occurred at 6:55 p.m. Saturday, July 9 at the T-Mobile store at 5601 S. Harlem. Employees told police that four men entered the store, grabbed merchandise from displays and ran out the door.

At 7:25 p.m. Lamontay C. Linnear, 19, of the same address as Fred Linnear, was taken into custody at 59th and Nashville.

Just one minute after that, 24-year-old Stanley T. Rounds, of the same South Side address, was detained in the 5700 block of South Nordica.

At least one of the men, Fred Linnear, reportedly ran into a block party that included a number of off-duty police officers. As he lay on the street, detained by local homeowners awaiting the arrival of a CPD squad car, he was photographed by a neighbor, who posted the image to Facebook.

ÒThis is a cop neighborhood,” said Garfield Ridge resident Tom Lukasz, as he drank an iced coffee at the Dunkin’ Donuts just steps from the T-Mobile store. ÒIf you commit a crime on Harlem, do not run east. Head for the expressway and get the h~ll out of here. Most criminals seem to know that, but every now and then, we get a few Homer Simpsons who run the wrong way, and then it’s ‘D’oh!'”

As often occurs when a crime-in-progress report is broadcast on police radio, Garfield Ridge was quickly swarmed with marked and

unmarked police vehicles. A number of off-duty officers reportedly joined in the hunt for the suspects.

ÒI heard the sirens and saw the lights,” said Garfield Ridge homeowner Vicky Battaglia as she stood in line at Beefy’s, an iconic fast-food restaurant two blocks south of the crime scene. ÒIt was a big commotion. The cops were fast and aggressive. It was like watching a fox hunt with a pack of hounds chasing down some hapless fox. Made me feel good about living in Garfield Ridge.”

ÒGarfield Ridge is one of the quietest neighborhoods in Chicago, and sometimes that means criminals misjudge us and think they’ll have an easy time here,” said Garfield Ridge Neighborhood Watch President Al Cacciottolo.

ÒWhat they don’t know is that we have an incredibly swift and effective response to crime, what with our Eighth District police routinely doing an awesome job, frequently assisted by the people who live here and have zero tolerance for crimes against people and property.”