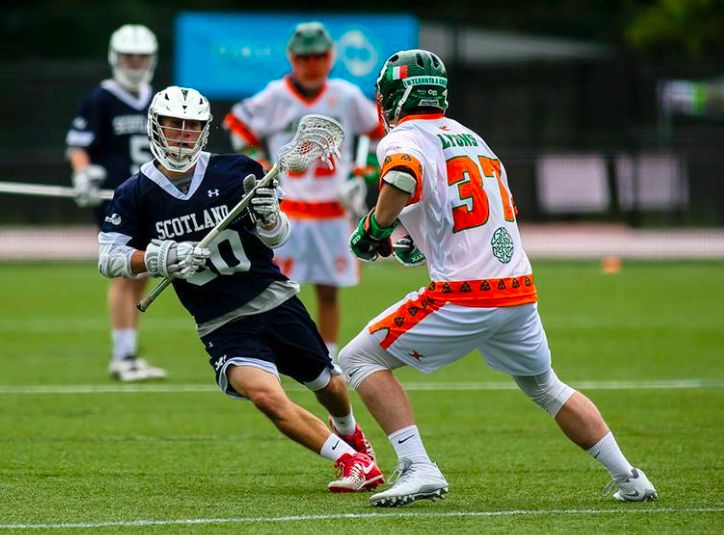 When Tom Lyons began playing lacrosse in seventh grade with a few of his grade school buddies, he never planned on one day playing the sport on the world stage.

Lyons, of Palos Heights, played lacrosse this summer with the Irish National Team as the squad competed in the Under-19 World Lacrosse Championships, held July 7-16 near Vancouver in Coquitlam, British Columbia, Canada.

Lyons, who graduated from St. Laurence in 2015, scored 14 goals and had two assists in six games in the Irish National Team’s first appearance at the event. Ireland placed seventh overall in the tournament, beating Germany 16-12 in the seventh-place game, with five goals coming from Lyons.

“Playing in this tournament was such a fun experience, and I made so many lifelong friends in the process. It’s definitely something I’ll never forget,” Lyons said.

Lyons became a member of the 23-man Irish team after a family vacation to Ireland during the summer of 2015, but the athlete originally didn’t think he had a chance of actually earning a spot on the team.

“We were going to Ireland to visit our family, and a few weeks before we left we found out that there was a U-19 trial out in Limerick while we were going to be there, so I packed my lacrosse gear and decided to go for it,” Lyons said.

Lyons participated in the three-day trial held at University of Limerick and learned he had made the team about three weeks after returning home.

While Lyons himself was born in the United States, he was eligible to be on the team because of genealogical allowances, as eligibility requires that the player himself, a parent, or a grandparent to have been born in Ireland. Lyons’ paternal grandparents, Tommy “Dixie” Lyons, born in Louisburgh, County Mayo, and Kathleen Lyons (nee Staunton), born in Westport, County Mayo, fulfilled that requirement.

While the Irish team was compromised of mostly Irish-born players, Irish-Americans were strongly represented on the team as well, as a number of players were from the United States.

“I was the only kid from the Midwest, but there was a kid from Oregon and a bunch of guys from the East Coast,” Lyons said.

After staying in contact with his teammates through group texts over the last year, the team finally assembled on July 3 near Vancouver for a mini training camp before the start of the championship. The training camp included long practices and exhibition wins over Hong Kong and Israel.

At the World Championships, Ireland stacked up wins over Scotland (14-9), Korea (19-4) and China (15-7), before losing to the Iroquois Nationals (22-5) and, despite three goals from Lyons, a loss to Israel 12-10, to set up the seventh-place game against Germany.

“The loss to Israel was kind of tough, especially since we beat them about a week before in a scrimmage match,” he said. “It was a good competition, and in the end they beat us when it mattered.”

The United States won the tournament for the second consecutive time, defeating Canada, 13-12.

“The American team was a blast to watch, and I actually got to meet a few of the players because we stayed at the same hotel,” Lyons said. “The American team is top-notch, with a lot of really great players from Division I schools from around the country, so it was quite an experience to see them in action.

“Meeting people from all over the world was definitely my favorite part of the experience. Seeing all these people from all over the world sharing this one passion for the sport was really cool,” Lyons added. “Participating in the opening ceremony of the event and getting to see all the flags from the different countries was amazing, especially after I got home and watched the Olympic opening ceremonies in Rio. The whole thing was like our own little Olympics.”

Lyons got his start with lacrosse in 2009, playing on the inaugural Beverly Lacrosse team as a seventh grader from St. Alexander School in Palos Heights. “A few friends and I went to out to Beverly because we knew the head coach, Dennis Foley, was starting a lacrosse program, and we just really wanted to play,” Lyons said of his early days. Foley is the head lacrosse coach at St. Laurence High School, where Lyons played for four years.

Playing for love of the game

Now a sophomore at Illinois Wesleyan University and a member of the IWU men’s lacrosse team, Lyons wants to continue playing the sport for the simple love of the game. “I love lacrosse, and I’m excited to continue playing with my team at Wesleyan over the next few years,” Lyons said.

The next World Lacrosse Championships will be held in 2020 at the University of Limerick, on the Irish National Team’s home turf at the very location Lyons made the Irish team in 2015. “My teammates and I made plans to meet up at the championships in 2020 in Limerick to hang out and maybe play a few pick-up games of lacrosse, but I’m not sure yet if I want to compete on the Irish men’s national team,” Lyons said, as he will no longer be under 19 when the next championship rolls around. “I want to see how well I do playing at Wesleyan, and I’ll see where it goes from there.”