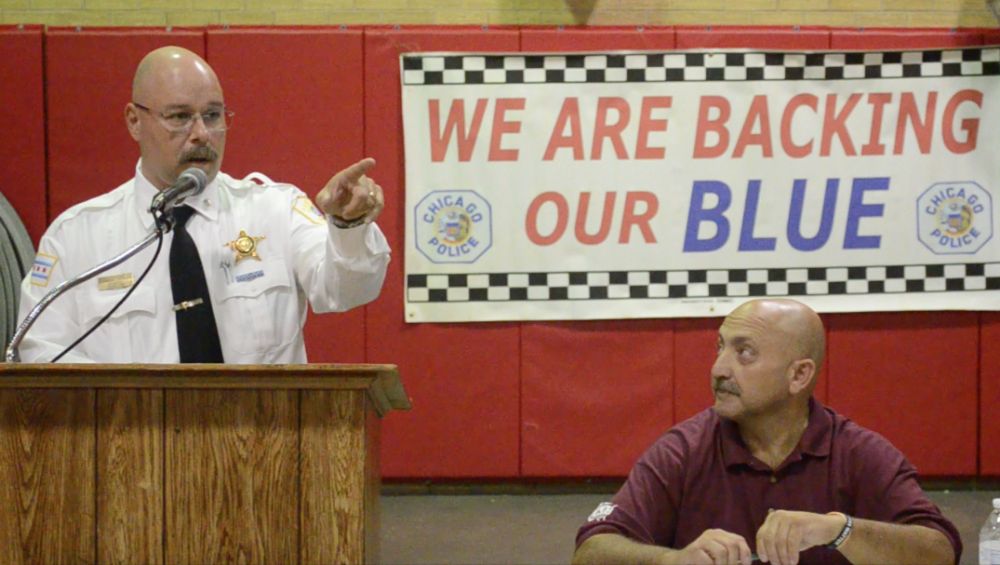 If the Chicago Cubs defeat the Los

since 1945ÑChicago Lawn (8th) District police are ready for what

will most likely be over-the-top celebrations, even in White Sox country on the

The district’s top cop made brief

mention of thereadiness at Monday’s

Born and raised on the Southwest

Side, Pontecore described himself as “a committed White Sox fan” as he first

does “have a plan” to address crowd control and protect people and property,

letters to the establishmentsÑthe bars, the liquor stores, carryout

services–about not serving [beer] in bottles, serving it [instead] in plastic

cups, making sure that they keep their [customers] in line and don’t let them

go crazy in the streets.”

The CPD drill is expected to be much

out after the Chicago Blackhawks’ Stanley Cup championship celebrations in this

decadeÑmost recently in June 2015. While crowds were loud and jubilant on

Archer Avenue and elsewhere in the district, a strong police presence helped

On other topics, Pontecore repeated

monthÑthat he is firmly committed to maintaining the “beat integrity” system

put in place years ago by Commander John Kupczyk. The mere mention of Kupczyk

on Monday drew applause from the crowd, nearly five years after the popular

“John Kupczyk was a friend of mine,”

Pontecore said. “He was a great police officer, and I am committed to the same

ethic here in the Eight District as he was.

“I believe strongly in beat

integrity,” he continued. “You will not lose [police] cars on this end of the

district. Your beat cars will remain out here, your rapid-response cars will be

out here. They will not go east in this district unless, of course, if we have

He added that applies to all beats in

Beat integrity was a tactic designed

end are not redeployed to east-end hotspots. For years before Kupczyk’s

arrival, people in Garfield Ridge and ClearingÑand even in neighborhoods

immediately east of Midway AirportÑcomplained that they were left unprotected

by redeployment of their beat cars to the Western Avenue corridor, a relatively

high-crime portion of the district then and now.

Garfield Ridge “is a great

neighborhood, and I want to keep it that way,” Pontecore added. “My goal is to

He also praised the district’s rank

and file police officers, saying they “do an astounding job” day in and day

out. The audience showed its agreement by giving the officers in the back of

the room a standing ovation later in the meeting.

Also at the meeting GRNW board member

High School raised more than $1,600, which will be donated to several local

spots on a bus that will conduct a group patrol later this month in Beat 811.

encouraged to send an email to [email protected]

coverage and photos in the print edition of the Southwest News-Herald,