December 9, 2016/Comments Off on ‘Long John’ remembered in Garfield Ridge 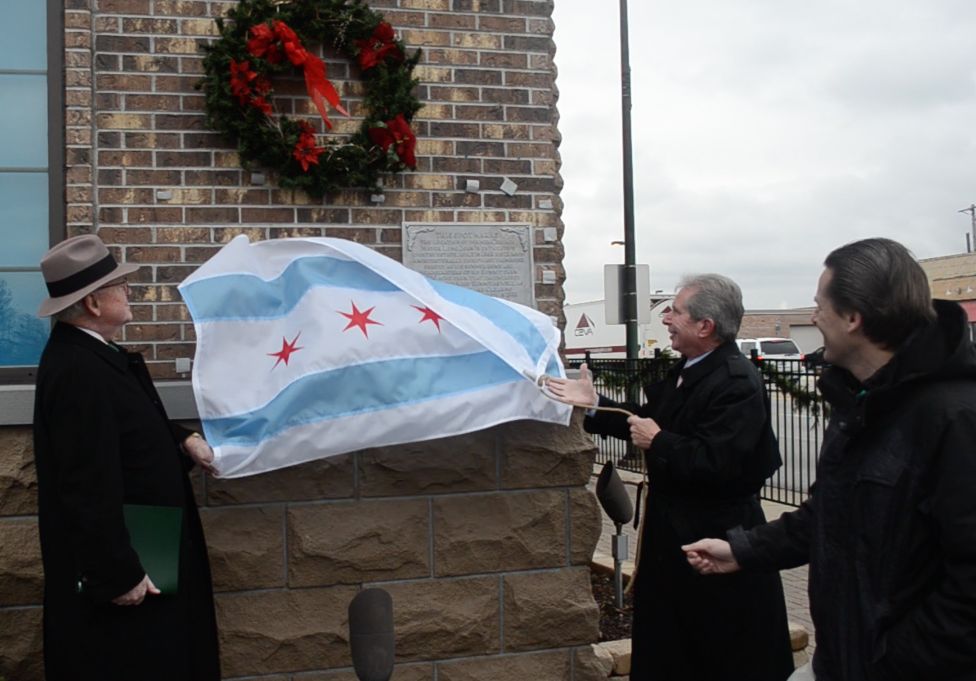 A piece of history in the Garfield Ridge neighborhood was remembered and honored late last week, as the Clear-Ridge Historical Society led an unveiling and blessing of a plaque affixed to the northwest corner of Banquets at The Mayor’s Mansion, 5445 S. Harlem–situated on what once was a large farm owned by Chicago Mayor John Wentworth.

Built in 1868, Wentworth’s massive, 4,700-acre spread included much or all of present-day Summit, Garfield Ridge and Clearing. Its 18-room farmhouse stood near what today is the 5400 block of South Neva until it was demolished in 1968 after years of falling into disrepair. When Wentworth lived on what he called his Summit farm, the area’s that would later be known as Garfield Ridge and Clearing had not yet been annexed by Chicago.

Wentworth, a two-term Chicago mayor and a six-term Member of Congress, was larger than life by more than one measure, according to 14th Ward Ald. Edward M. Burke, dean of the Chicago City Council and a noted historian.

ÒHe stood six feet, six inches tall and was known in his day as ‘Long John’ or ‘Johannes Elongatus’Ña term applied to him by political pundits of the era,” Burke told a 20-person gathering of CRHS members, local business owners and others last Friday morning at the popular banquet hall’s parking lot.

ÒWith the placement of this marker outside the Mayor’s Mansion, you have all taken an important step in re-acquainting the public with the important but mostly forgotten legacy of one of Chicago’s most dynamic and influential early citizens,” Burke added.

Crude to his critics, strong to his supporters, Wentworth used his position as editor of the Chicago Democrat, one of Chicago’s first newspapers, to launch his political career and attack his opponents. Burke added that some historians say that without the backing of the powerful Wentworth, Abraham Lincoln would not have been the Republican nominee for president in 1860.

Wentworth died in 1888, and the country estate was sold to the Parlin family, which owned it for the next 80 years.

At last week’s dedication, Burke said the plaque is a fitting tribute to a mayor who helped rid the city of brothels and other vice, encouraged economic development and fought on behalf of the common man.

The alderman added that he hopes the plaque Òwill serve as a reminder to future generations that history neither dies nor disappears, but lives on in the spirit of the pioneers and the memory of their optimism and their courage.

ÒWhich is why we can never forget John Wentworth,” Burke continued. ÒHis legacy is implanted in the roots of our communities. The marker also stands as a tribute to the settlers who followed in Long John’s footsteps. They built and established thriving, affordable neighborhoods that we enjoy today.”

Burke also praised the Clear-Ridge Historical Society for its ongoing work to identify and encourage others to remember the area’s Òrich and defining history.”

Others at the event, including 23rd Ward Ald. Michael R. Zalewski and CRHS President Rob Bitunjac, praised Mayors Mansion owner John Kap and his family for the thousands of dollars they have poured into the building and grounds in upgrades, including architectural flourishes that show echoes of the Wentworth farmhouse.Those interested in learning more about Wentworth and the area are encouraged to contact the CRHS, which maintains files at the Clearing Branch Library, 6423 W. 63rd Place. The CRHS maintains a website and a Facebook page and invites the public to its monthly meetings.