Skip to content
January 25, 2017/Comments Off on Focus on Fire: ‘Niko’ could be the next big star 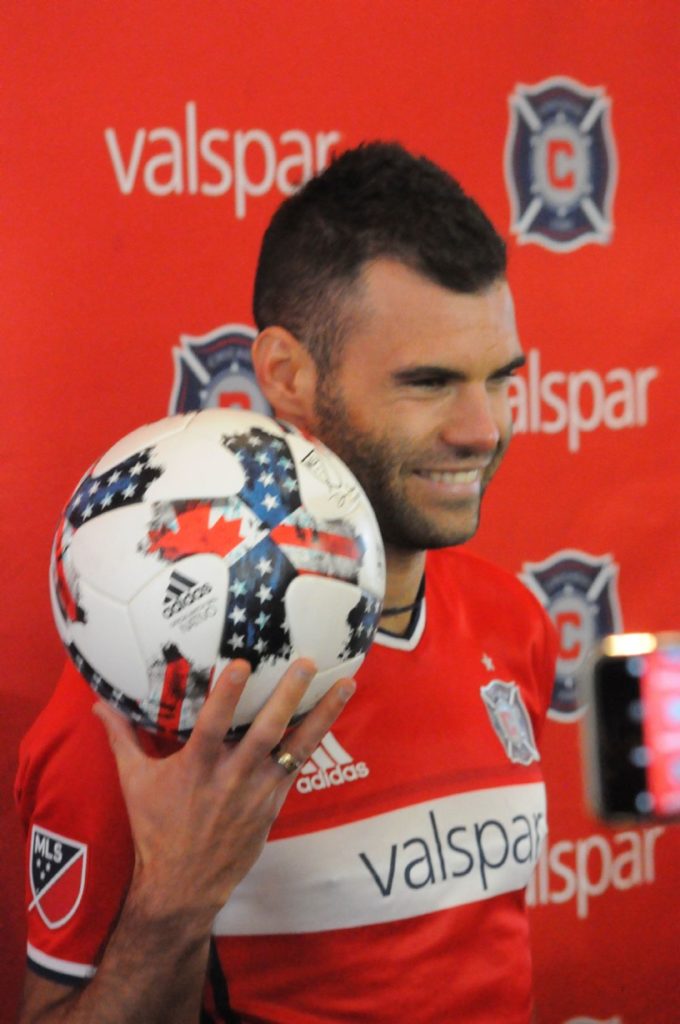 Focus on Fire: ‘Niko’ could be the next big star

That was the scene Friday night at O’Hare International Airport as dozens of soccer fans cheered and when Serbian forward Nemanja Nikolic disembarked his plane to start his career as a member of the Chicago Fire.

They took photos of him and with him. They presented him with a Fire scarf. They shared a few laughs with him.

OK, it’s not like the Cubs mob scene returning to town after winning the World Series or anything like that, but it could be the beginning of something big. The Fire organization doesn’t have a player that is highly recognizable in the Chicago area so having this guy come off a plane and get the rock star treatment from the fans is a good sign.

ÒIt was a fantastic feeling,” Nikolic said Monday at the team’s PrivateBank Fire Pitch to open preseason camp. ÒI didn’t know anyone was going to be there. It was 10 p.m. I had travelled almost 10 hours. Then I saw the fans. That made me happy. The expectations here are high. I will do my best to try to make them happy.”{{more}}

Fire General Manager Nelson Rodriguez said that those fans who don’t know of Nikolic will soon love his approach to the game.

ÒIt was unexpected that people showed up at the airport,” Rodriguez said. ÒBut the fans were resourceful how they got his flight information and waited into the evening until he arrived.

ÒI think he’s a player our fans are going to love. If anyone followed his career at Legia, he became idolized by the fans there. He gives it all for his team. He produces. I was happy for him because we had spoken to him about the warm character of the people of the Midwest and of the city of Chicago so that was nice that he got to experience it firsthand on his arrival.”

The 29 year old came to the Fire via transfer from Legia, Warsaw and signed as a Designated Player on Dec. 20.

Nikolic led the Ekstraklasa with 12 goals through the first half of their season in 2016. He added two assists in 19 matches and left with six goals in his final three regular season matches, including a hat trick against Gornik Leczna two days before inking his deal with the Fire.

In 2015-16, he led the Ekstraklasa with 28 goals, and was third in assists with 10. He was named the league’s Player of the Year and Forward of the Year.

Nikolic opened the season on a tear with five goals in the club’s first three games. He had 15 goals through the team’s first 12 games, and recorded seven multi-goal games during the campaign and helped Legia Warsaw to its 11th league title in club history.

So the man knows how to put the ball into the net and he comes to Chicago wanting to continue that tradition.

ÒI was told this team was not successful last year (the team finished a Major League Soccer-worst 7-14-13) and the future is the most important thing,” Nikolic said. ÒI hope I will score many goals here. To score goals, you need to work really, really hard and believe in yourself. Sometimes you have good moments and sometimes you have bad moments. But you need to score because it is your job.

ÒI want to score goals here and I will work really hard to achieve that.”

Bronico, a midfielder, appeared in 74 collegiate games for the 49ers, scoring 25 goals and adding 23 assists. A Conference USA Player of the Year and Golden Boot Winner in 2016, the High Point, N.C., native led the conference in assist in 2015 with 10, the fifth-highest single season total in program history.