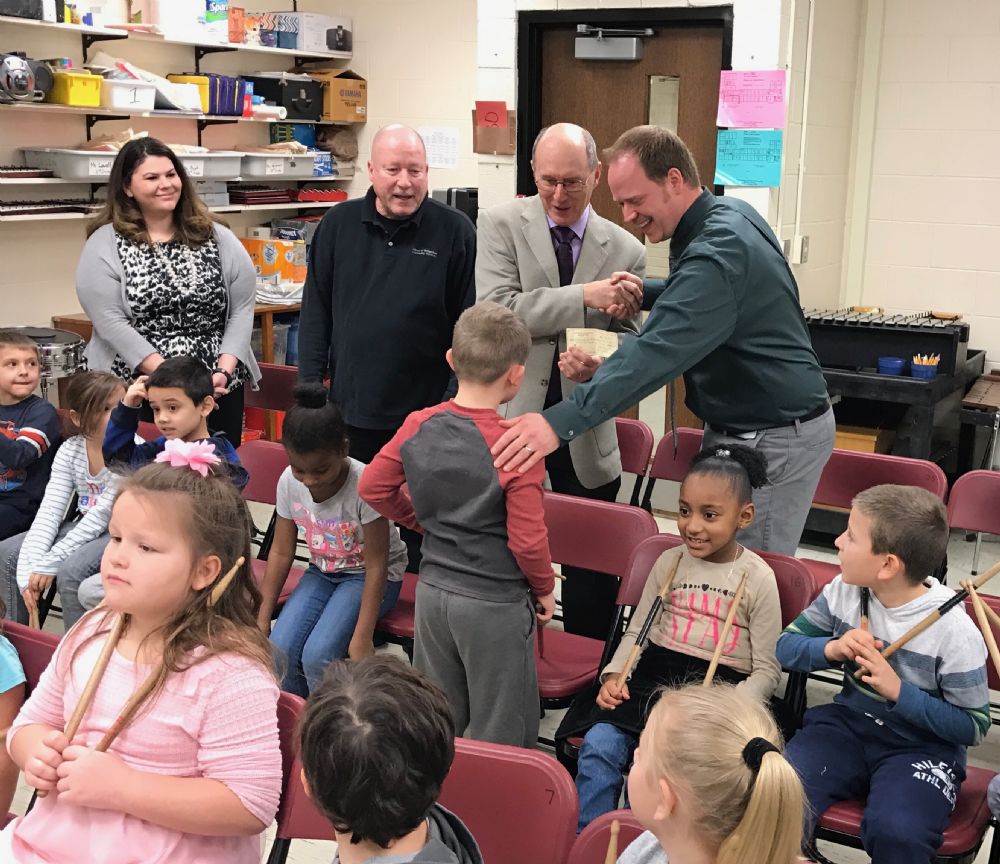 John Olsen, the music teacher at Bridgeview’s Lyle Elementary School, 7801 W. 75th St., is nearly halfway to his goal of raising money to buy a portable sound system thanks to a recent $300 donation from the Bridgeview Active Party.

The donation from the political party of the village board and Mayor Steve Landek means Olsen only needs about $800 more to buy the $1,600 system.

Village trustees Claudette Struzik and Michael Pticek presented Olsen with the check during his music class with a group of first-graders on Jan. 23.

Olsen said that the entire school of 463 boys and girls, in grades

kindergarten through sixth, will benefit from the sound system. He teaches music to each one.

They already do benefit from having Olsen as their music teacher, said and parent Eva Doyle.

ÒHe started a GoFundMe page on his own and raised almost $500 on his own. This is the first time our kindergarten students were in the school concert. They’re learning about music,” said Doyle, treasurer for the Parent Teacher Council and the mother of three students enrolled at Lyle.

ÒThis is his first year here and he is doing a good job. They’re learning how to read musical notes. If you see him when he’s teaching, he’s into it,” Doyle said. ÒHe goes above and beyond.”

Nuray Kavustuk, in her third year as principal at Lyle, said Olsen Òcame highly recommended, and we’re very lucky to have him here.”

ÒIt’s his passion. He’s inspirational. He wants the kids to live the music and be in the music,” Kavustuk said. ÒHe gets the kids fired up about music.”

Struzik said the donation was made because the political party tries to help schools and other good causes when possible.

Taking a break from teaching the class, Olsen said he appreciates the Ògenerous” donation.

Donations may be made if you do a computer search for ÒChildren’s Voice Need to Be Heard by John Deane Olsen” and ÒGoFundMe.”