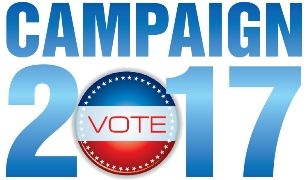 With all 16 precincts reporting, Sharon Anderson led all six candidates with 2,046 votes, Shannon Johnson was next with 1,903 and Marge Hubacek, the former superintendent’s secretary for the district, was third with 1,872 votes.

Broderick had won a two-year unexpired term in 2015 and was seeking a full, four-year term.

With seven of eight precincts reporting, Brian Conroy was well ahead in the race for the two-year seat with 1,330 votes to Joseph Ivan’s 537 votes.

In the race for the four-year seat, Barbara Garvey was leading the five-person field with 1,625 votes. In second place was Michelle Maggos with 1,449. Rebecca Zoltoski was third with 1,442 votes and fourth was Scott Encher with 1,255. Brian Pencak trailed the field with 1,249 votes.

In Burbank District 111, six candidates were seeking four four-year seats on the school board.

With all 14 precincts reporting, newcomer James “Stash” Stefanek was leading with 1,238 votes, while incumbent Carleen Skowronski was second with 1,147 votes, Patricia Saunders was third with 1,118 votes and newcomer Pamela Duzakowitcs was fourth with 916 votes. Trailing the field were Danette Williams with 711 votes, Steve Ficker with 627 votes.

In Riverside-Brookfield District 208, five candidates filed to seek three four-year seats on the school board. Board president Michael Welch did not seek re-election.

With 23 of 25 precincts reporting, newcomer Gina Sierra was leading with 3,088 votes. Second was newcomer Ramona Towner with 2,512 and third was newcomer William Smithing with 2,315. Incumbents, Matthew Sinde Jr. with 1,956 and Ed Jepson Jr. with 2,254 were trailing the field.

Incumbent Molly Murphy was leading with 4,103,in second was incumbent Jessica McLean with 3,961, in third was incumbent Thomas Cushing with 3,570 and fourth was incumbent George Dougherty with 3,439. Trailing was challenger William Cassidy with 2,765.

In Oak Lawn Community High School District 229, Danielle Arnold and Lenny Svoboda Jr. mounted write-in campaigns for the unexpired two-year seat on the board, which had no candidate file for the seat.

Those results were not expected to be ready until later this week, according to Svoboda Tuesday night.