April 27, 2017/Comments Off on Indian Springs Supt. Nebor to retire after 18 years 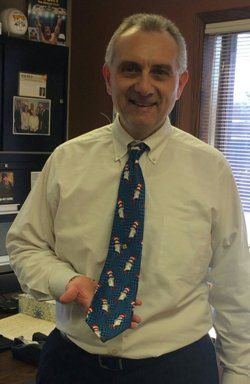 Indian Springs Supt. Jon Nebor has decided it’s time to call it quits after a three-decade career as an educator.

“If I had to do it again, I would,” he said Monday. “”I’m the second longest serving superintendent in the district. I love this district. I have absolutely no regrets. This is a great community with nice parents.”

“I haven’t decided what to do,” he said indicating travel with his wife and volunteerism were strong possibilities.

“I think I’d like to find some volunteer opportunities,” he said. “I’m going to have to find something to do.”

One of his last accomplishments was the acquisition of nearby Budreck Trucking and the All Star Sports bar to create a greenspace for the district along Roberts Road.

“It’s done short term,” he said. “But long-term plans will be up to the school board.”

Taking over in July will be Blair Nuccio, a Summit native, who is the current assistant superintendent.{{more: Full story}}

Nuccio, 48, was hired in March and will become superintendent on July 1. His five-year contract runs through June 2022.

He has been at District 109 for 15 years after three years as superintendent at Willow Springs District 108.

The 1986 graduate of Argo High School said he was “looking forward to being superintendent.”

“I love School District 109,” he said. “It’s been good to me. “I’m looking forward to the next several years.”

Nebor is the second long-serving superintendent in the area to put in for retirement.

Kevin O’Mara is retiring at the end of June after eight years as superintendent at Argo High School District 217.

He said the average school superintendent in Illinois lasts less than three years.

Jill Kingsfield, 46, was hired earlier this year as Argo’s new superintendent. She’ll take over on July 1.