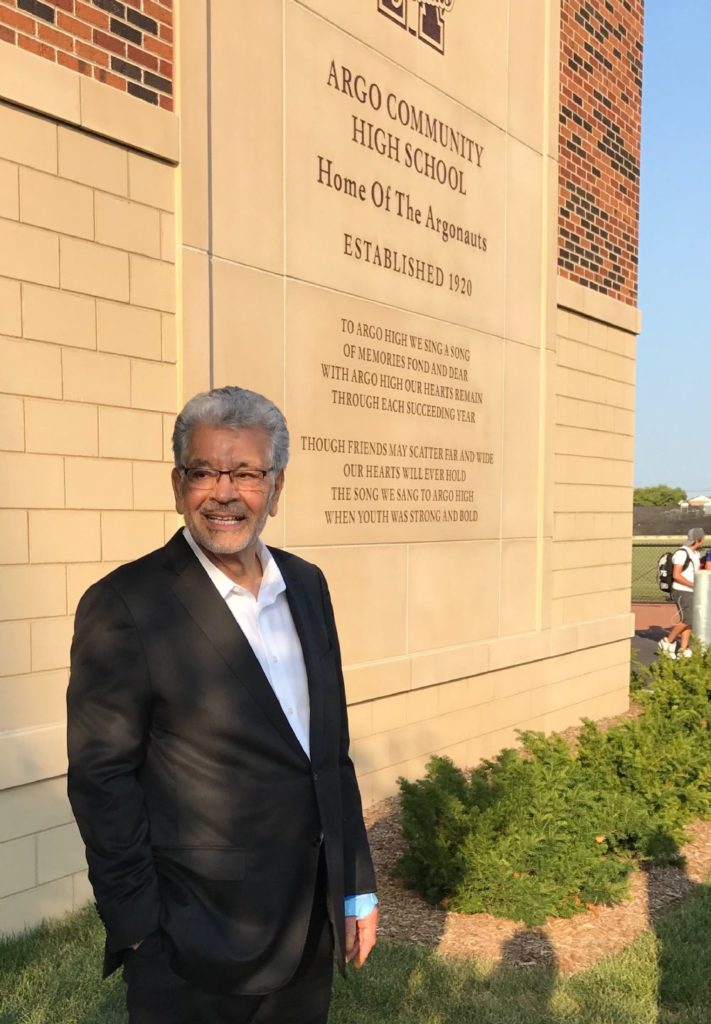 Moments before the ribbon-cutting ceremony for the new Richard and Sharon Portillo Performing Arts Center at Argo Community High School, school board trustee Nick Caprio smiled when asked about the interior.

The $17 million center, built where tennis courts used to be on the south side of the high school, is a stunning state-of-the-art achievement. Quite a few “oohs” and “aahs” were heard from the hundreds who toured the center after the Aug. 18 ribbon cutting ceremony.

The theater has seats in Argo maroon, sound buffers on walls and the ceiling, and an orchestra pit. As Summit Mayor Sergio Rodriguez said, “it looks like (it’s on) a college campus.”

The center also has spacious rehearsal rooms for the band and choir. There’s a connecting walkway on the second floor leading to the main building. And there’s the Argo Wall, a colorful high school timeline.

Friday’s ceremony was attended by high school teachers and staff, and elected officials like Bridgeview Mayor Steve Landek and most of the trustees from that village and Summit.

But the stars of the show were the two people whose names are on the building. Dick and Sharon Portillo.

“It’s with great hope that the Richard and Sharon Portillo Performing Arts Center becomes a beacon of learning and inspiration,” he added. “If just one student can say it was an important part of their journey through life and helped them achieve their goals, it will have served its purpose,” Dick said.

The couple met at Argo High School, fell in love, married, had a family and started a hot dog stand that became a successful chain and made them millionaires. But they’ve never forgotten their roots, and happily donated $1 million to help build the performing arts center. Hundreds of Portillo’s hot dogs were served up after the ceremony.

“It’s always good to come back to Argo to see the old school,” said Dick, a 1957 graduate. “A lot has changed. Cars had fins, skirts had hoops and my hair was a lot darker. I really get emotional when I see our names on this building.”

After the ribbon was cut and she walked inside, Sharon Portillo called the building “absolutely incredible.”

“It’s more than I anticipated. This is beautiful,” she said as several parents waited to meet and thank her.

District Business Manager Joe Murphy said talks of expanding the original theater began six years ago, when the growing performing arts program required more space. After renovating existing space was ruled out, attention was given to an arts center.

“Paramount to the district was that this project be finished on time and on budget. Both goals, I am proud to say, we accomplished,” Murphy said. Glancing toward the Portillos, he said, “as the money guy, let me personally say thank you, thank you, thank you.”

Murphy also thanked former Supt. Kevin O’Mara for working with him on the project. It was O’Mara who reached out to Dick and Sharon Portillo about making a donation to their alma mater.

New Supt. Jill Kingsfield said she’s “learned about the unwavering pride the school board, alumni, students, staff, families and the community has for Argo High School.”

Tracy Biederstadt and Lou Noto, of DLA Architects, said it was a challenge because space was limited. The second-floor walkway resulted because the school wanted to keep a driveway open on the south side of the school.

“It’s something you dream of. It has a professional feel to it, and (it’s fun) to see the excitement in the students’ eyes when they see it for the first time,” Soebbing said.

Count Cortez in that crowd. “I’m so jealous,” she said looking at the high ceiling, and large windows that allow plenty of natural light.

Summit Village Trustee Sam Dardovski, a 1977 graduate, said the Portillo Center was needed because “”as you know, the arts are important to give kids a balanced curriculum.”

If you missed the opening, a variety show is scheduled at the center for 7 p.m. Sept. 14.