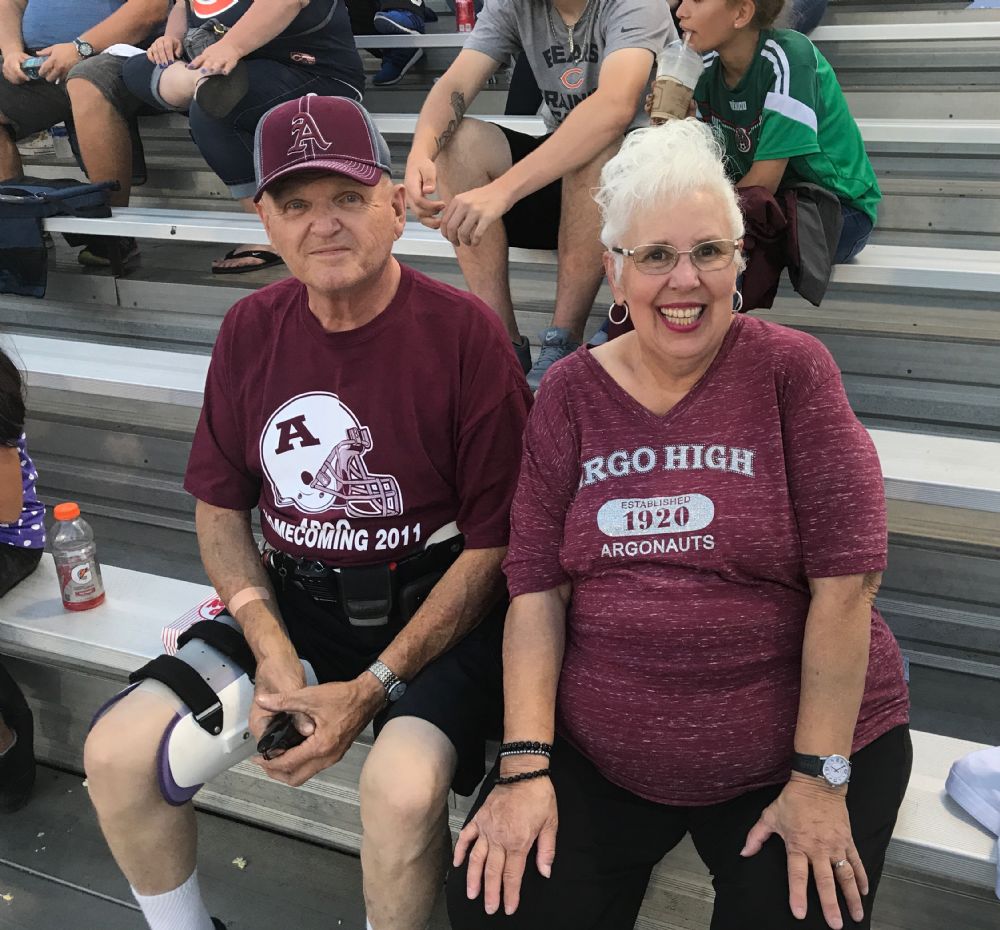 The first-ever homecoming football game played under the lights at Argo Community High School was met with mostly favorable reviews.

There were a few fans who prefer the 1-2-3 punch of a homecoming parade, football game and dance all on the same Saturday.

Jimmy Sinks, from the Class of ’87, said the nighttime setting “is different, for sure. I’d rather it be after the parade. Maybe it’s a good thing. We’ll find out.”

He brought wife Cathy, and two of their six children, Jack and Christopher, to the game. Cathy, who bought a couple of pairs of sweatpants, said “this is kind of different.”

But the Sinks family, of Justice, was in the minority. Most fans contacted before the game said they liked the idea of homecoming under the lights.

Argo’s team, evidently, agreed. The Argonauts (1-3) pulled out a 21-20 victory over Evergreen Park on the last play of the game.

Dana Kral, secretary to the activity director, was selling Argo gear, most of it at affordable prices. There was even a $5 T-shirt, a cartoon Argonaut branding a mustang. “They’re leftover from the last time we played Evergreen Park for homecoming four years ago,” she said.

Kral thought the change of game time to Friday night was a good idea for girls on the cheerleading and pom-pom squads, who no longer have to rush home after a Saturday afternoon game and get ready for the homecoming dance that night.

Karen O’Donnell, of Bridgeview, wore an Argo T-shirt and carried an Argo seat cushion. Her son, Craig Weis, is a junior starting on the offensive line.

“I think it’s awesome because the boys love playing at night and it’s got their spirits up higher. He’s ready,” said O’Donnell, a self-professed “sports geek.”

District 217 Supt. Jill Kingsfield called the game “a great opportunity for our student-athletes.”

“It will be interesting to see how it goes and the board can decide if we continue this or go back to Saturdays,” Kingsfield said. The Distinguished Alumni Breakfast was held at 7:30 a.m. before Saturday’s 9 a.m. parade, she said.

“Some alumni are disappointed it’s not a day-long event, but we’ll try it this way this year,” she said.

Kingsfield wore the Argo T-shirt she purchased at last year’s homecoming when she was investigating the job that would open up at the end of the 2016-17 school year. “I didn’t know I’d get this job, but this was the T-shirt I bought. It was destiny,” she said.

When the school board decided earlier this year to try a Friday night homecoming game, they hoped it would boost attendance. There were more fans at the game this year, said junior pom-pom Karolina Lisztwan, who was happy to have more time Saturday.

“I’d stay till halftime on Saturday. This is better. After the parade, I’ll get new eyelashes and get ready. I like it better this way, and the crowd is bigger, too,” Lisztwan, of Justice, said.

Argo alumni and longtime boosters Marty and Alice Vilimek, of Bridgeview, dressed head to toe in Argo gear, were among those happy with a Friday night game.

“I like it. The weather, for one thing, and the atmosphere. It’s different. Very nice,” Marty, Class of ’63, said.