Skip to content
December 8, 2017/Comments Off on Pols jockey for position in post-Gutirrez era 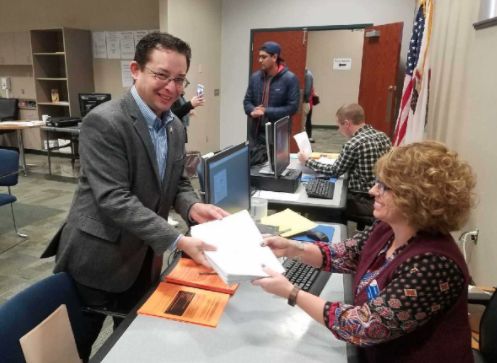 for political position continued on the Southwest Side this week, in the wake

of the news that U.S. Rep. Luis V. Gutirrez (D-4th) will not seek re-election

succeed him in Congress, announced on Monday that he took “a giant step

forward” when he filed some 15,000 petition signatures to get his name on the

In a statement, Garca called his political operation “a

“In just five days, we collected as many signatures as

almost all the other candidates combined,” Garcia added.

The other Democrats vying to succeed Gutirrez include 15th

Filing on the GOP side for the seat were city residents

both of suburban Riverside.

The Fourth Congressional District includes much of Archer

Heights and Gage Park, as well as a portion of West Elsdon.

The race for Garca’s County Board seat has attracted

Last week, as he was accepting the backing of Gutirrez,

protg, as his successor on the County Board.

Munoz filed his petitions with the Cook County Board of

Elections, but then withdrew them earlier this week, as he and Garca threw

their support behind Alma Anaya, who started with Garca as an office assistant

In a statement, Munoz said he was “overjoyed” to withdraw

his petitions in favor of Anaya, adding that he only circulated his own

petitions as “an insurance policy of sorts, to guarantee that we’d have a

strong progressive candidate on the ballot no matter what.”

Lopez criticized the maneuver as a bait-and-switch tactic,

tweeting, “For being ‘progressives,’ they sure do act like machine

The Seventh District includes Garca’s political base, the

Little Village and Pilsen communities, as well as all or parts of several

Southwest Side neighborhoods, including Vittum Park, the Hearst area, Sleepy

news coverage and photos in the print edition of the Southwest News-Herald,