February 7, 2018/Comments Off on Olympian Coyne balances an enormous schedule 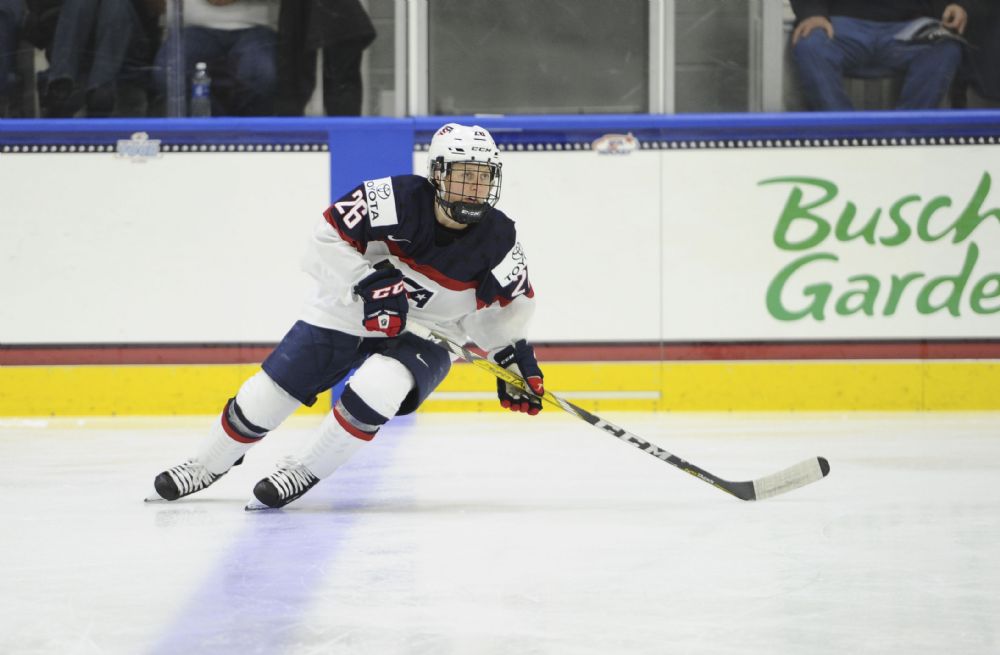 For those who have time management issues in their lives, they might want to talk to Olympian Kendall Coyne.

Coyne, who is making her second Olympics appearance in Pyeongchang, South Korea, as a forward on the U.S. Women’s National Hockey Team. Opening ceremonies begin on Friday. The first game is against Finland at 1:40 a.m. Central Time, on Sunday.

Coyne, nicknamed “The Sidecar of Team USA Hockey” by NBC Sports, was one of a handful of U.S. Olympic team hockey players announced live on Jan. 1, during NBC’s Winter Classic.

“It was a special moment to be named to the Olympic team for a second time, and to be in New York as a representative of our team,” she said. “However, I wish every member of the team could have been there.”

People usually see the 5-foot-2, 125-pound Palos Heights hockey legend who earned a silver medal in Sochi in 2014 on TV on the ice and during local appearances. What they don’t see is the time and effort she puts into the game with practices while trying to balance life in the real world.

Coyne says she manages her extraordinary life with one mantra: Balance.

“As an elite athlete, balance is so important,” she said. “It’s important to eat right, sleep a lot and get the proper body work when needed.”

Coyne learned the need for balance the hard way.

Last year, she told The Athletic, “Growing up, I was always hockey, hockey, hockey. I didn’t have a balance. I started to feel like I was going to get burnt out if I didn’t find that balance within myself. When I graduated college, I knew my priority was going to be my family, my friends, my fianc (pro football player and Orland Park native Michael Schofield). And hockey was right up there, but I also needed that balance because of the lifestyle that we’re living.”

Key to helping manage her schedule and workouts has been Schofield. They knew each other at Sandburg High School, and reunited while working out at a gym in 2014. Romance blossomed, according to her Olympic profile, when Schofield said he was “blown away” that she was working out with her good hand, with her left hand still in a cast, having just had surgery on her wrist. Both have said that they motivate each other to be their best in their respective sports. Throughout their courtship, Schofield has joined her on the ice for speed drills.

Schofield told the Denver Post, “We do a good job motivating each other and pushing each other,” he said. “She’s pretty strong, so there’s a couple of times I’ll grab a weight and I see her picking up a heavier one and I’m like…okay, I’m picking up an even heavier one.”

They were engaged in January 2017, at The Plush Horse ice cream shop in Palos Park, which Schofield had decorated with rose petals and pictures of their courtship.

Their wedding is set for July 7.

Recently, she shared her upper-body workout on the Olympic Channel. During the three-minute video, Coyne demonstrates both neutral grip and overhang pull-ups and chin-ups, which she says is important for developing her strength.

“As the smallest player on the U.S. National team, it’s important for me to do these (neutral grip) exercises every day, especially having had a wrist injury,” she said.

Coyne is keenly aware of her status as a role model.

“I embrace all the different roles being an Olympian provides,” she said. “My favorite one is being a role model to the younger generation. I remember the sense of empowerment and inspiration that (Hockey Hall of Famer) Cammi Granato gave me when I was seven years old, If I can be that for girls today, it is an honor for me to do so.”

The current goal is earning a gold medal. But after that É

She’s not saying, despite several questions posed regarding a third Olympics in 2022, playing professional hockey, or her plans to return to work. Part of the balance she needs, perhaps, is to focus on one thing at a time.

“My only post-Olympic plan at the moment,” she says. “Is my wedding.”

By PETER HANCOCK Capitol News Illinois [email protected]om SPRINGFIELD – Attorneys for the state of Illinois joined their colleagues in Nevada and Virginia Wednesday in asking a federal appellate court to declare that the Equal Rights Amendment has been legally ratified as the 28th amendment to the U.S. Constitution. “I have a daughter who intends to…