April 12, 2018/Comments Off on Bridgeview promotes firefighter to lieutenant 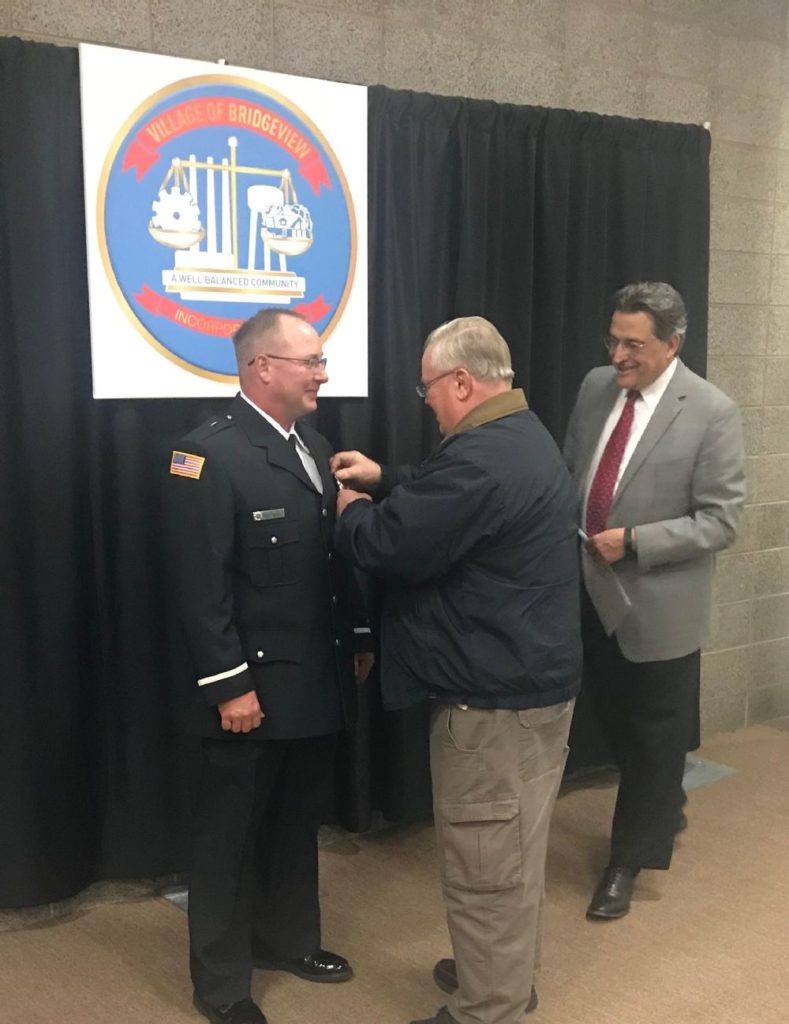 After 17 years working as a firefighter and paramedic for Bridgeview, James R. Clark IV has a new title: Lieutenant.

Clark was sworn into his new office by Mayor Steve Landek at the April 4 meeting of the Bridgeview Village Board.

His uncle, Ernie Roede, pinned the lieutenant’s badges on Clark’s uniform after he was sworn in by Landek.

Roede had been a father figure of sorts for Clark since his father, James R. Clark III, passed away 17 years ago.

“Lieutenant Clark is official now, so you guys better watch it. He’s going to give some orders right away,” Landek said joking with the many firefighters in attendance.

As a lieutenant, Clark said he will “still be in the process of firefighting, but more in a supervisory position.”

There are challenges with having industry in town, Clark said, “but there are also challenge with homes and the people who live here and who pass through the town in the day.

Clark is the divorced father of four daughters, none of whom are interested in following his firefighting footsteps.

“My daughters have all kind of taken to the arts. I have one who is a full-time art student in Maine. She got a full scholarship. I have another daughter who cuts hair downtown. A third daughter is graduating from high school this year.”

That third daughter, Isabella, 18, works with horses at the Memory Lane stable. She’s heading to Moraine Valley Community College this fall. “I’m extremely proud of him. This will be a great thing around the house, too. Hopefully, he’ll be home a little bit more,” she said of her father.

Clark became interested in firefighting because of his father.

In other business, the village board by a 5-0 vote approved an ordinance to rezone property at 8146 S. 77th Ave. from single-family residential to limited industrial, also granting variations to allow the construction of a storage warehouse for Michael’s Cartage.

Variances include reducing the minimum lot area from 20,000 to 6,647 square feet; along with reducing the minimum requirements form the front, side and rear yards. The building’s maximum height will be 24.5 feet instead of 15. The maximum lot coverage is increased from 40 percent to 55.37.

The board also voted 5-0 to abate taxes levied for the 2017 corporate fund.

“We levied $4.2 million for the corporate fund. We are reducing that amount by $.17 million because we have sufficient funds to cover the corporate operations,” village Trustee Michael Pticek told the board.

Trustee Mary Sutton did not attend the meeting. The board’s next scheduled meeting is 7 p.m. April 18.