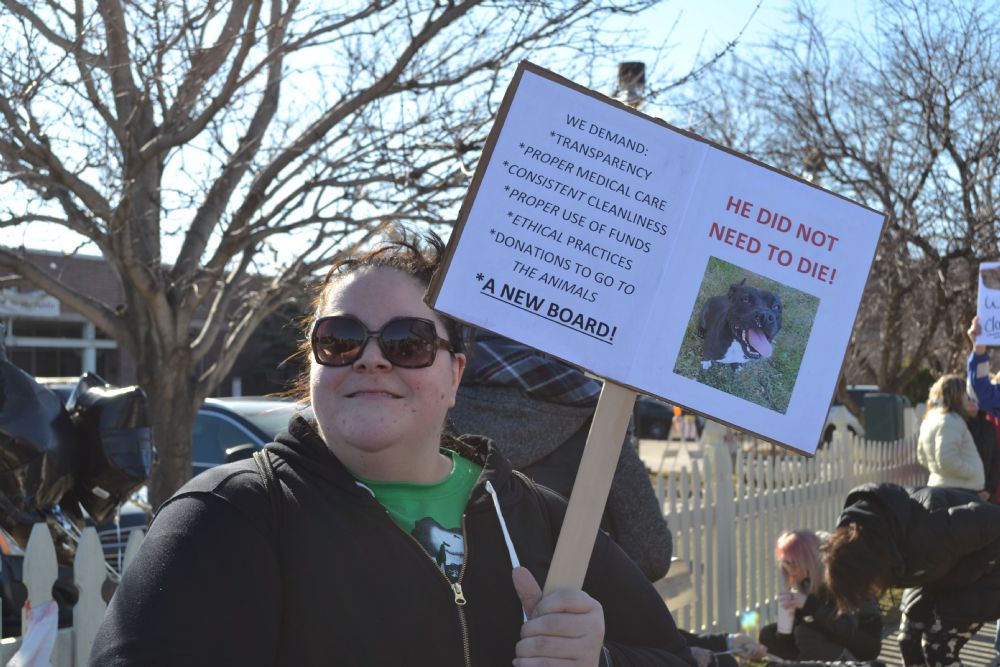 Changes are afoot at the Animal Welfare League shelter in Chicago Ridge, which has come under fire from activists complaining of bad management and animal care following an outbreak of canine influenza, or dog flu, in January.

In a statement issued May 2, the board of directors said former executive director “Linda Estrada is no longer employed with the Animal Welfare League, effective immediately.” Estrada had been both executive director and president of the shelter at 10305 Southwest Highway.

The removal of Estrada was one of the main goals of animal rights activists who began holding regular protests outside the shelter since the outbreak of dog flu in January led to AWL suspending its adoption program for dogs, cats, and all other small animals there.

Among other things, she was accused of practicing veterinary medicine without a license, overmedicating animals, and acting vindictively against employees and volunteers who challenged her. Some expressed fear of speaking out publicly because they said she threatened them with lawsuits if they did so.

Estrada’s two sons also worked in various capacities at the shelter. One was an investigator in charge of ensuring that pets were going to suitable homes. But their names no longer appear on the AWL website.

The suspension of adoptions apparently was quietly lifted in recent weeks, although employees would not confirm that. They had said in March that lifting it was dependent on test results that were due any day. Advertisements announcing that there are pets available for adoption are now outside the shelter, and notices about the suspension have been removed. While adoptions were suspended, the veterinary clinic on site continued to operate. The clinic is still in operation.

The activists, including animal rescue representatives, former AWL volunteers and employees claimed that the flu outbreak was caused or worsened by management and poor care of the animals over many years. Numerous photos taken at the site in recent years, showing dogs housed in unclean conditions in the facility also circulated online.

AWL spokesman Jim Prescott said this week that there would be no further comment aside from the statement. But he added that “to the best of my knowledge,” the shelter is again fully operational.

In early March, Chicago Ridge Mayor Chuck Tokar and Trustee Ed Kowalski met with Estrada and several other representatives to discuss the situation. Shelter officials as well as some of the activists rallying against Estrada also spoke at several Chicago Ridge Village Board meetings that month.

The AWL regularly passed inspections from the Illinois Department of Agriculture, which oversees animal shelters. But activists complained that shelter was given enough warning before the inspectors came to clean up the facility beforehand.

This led to Kowalski putting together a panel of activists to meet with shelter officials and help remedy the problems, and inspectors from several Chicago Ridge departments, including building and code enforcement, checked out the facility as well.

At a recent village board meeting, Kowalski showed a pile of reports he received from the various departments, which outlined numerous violations found. He said if they are not corrected, the shelter will be fined.

“I am very disappointed in the inspections by the Department of Agriculture,” said Kowalski, asserting that the violations should have been caught by that department.

Following Estrada’s departure, Kowalski said, “The village takes animal welfare very seriously. We took calm, yet deliberate action to put the facts together. The panel was one of those actions that helped determine the culture and facts of what went on at AWL. This led to a five agency/department inspection that uncovered many issues that needed attention and correction.

“Their board took the action they deemed necessary to comply, I assume. Both myself, our mayor, and our board of trustees in Chicago Ridge recognize the need to move forward to make sure the animals and employees and volunteers at AWL have a safe environment. Anything in our power to enforce will be, and any assistance to help AWL become better, will be used,” Kowalski said.