August 2, 2018/Comments Off on 137-pound bundle of joy born at Fitzjoy Farm stable 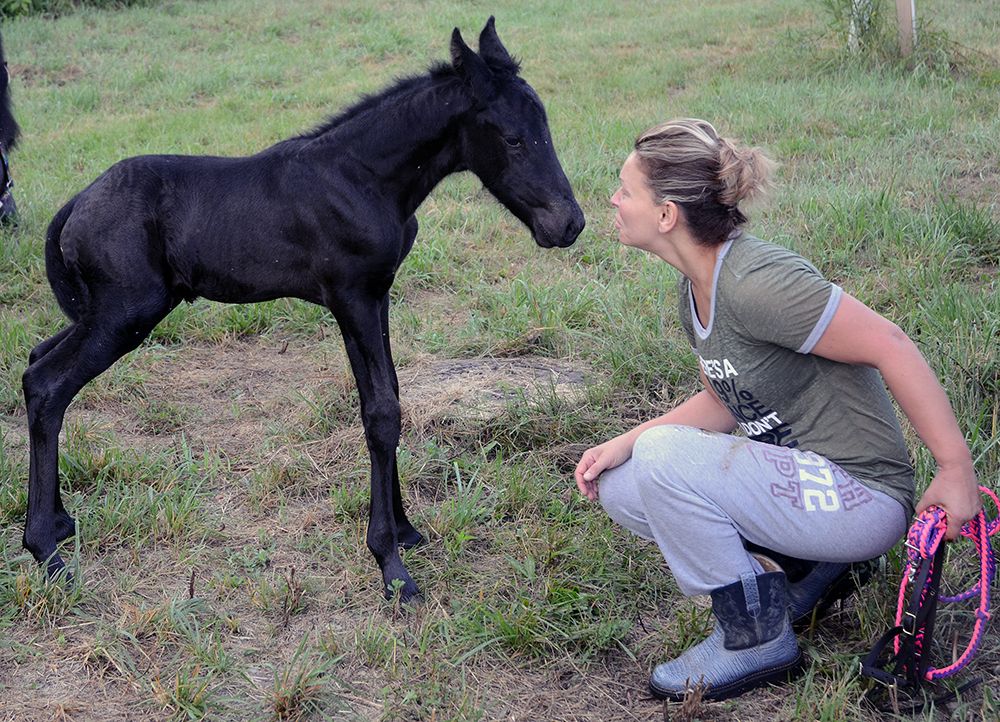 Horse owner Dena Georgakis was hardly dressed for such a blessed event.Ê

But Mother Nature couldn’t be put on hold, so even though Georgakis was expecting a very special phone call, she wasn’t exactly ready for it the moment it came.Ê

“We were at Home Depot and I was in flip-flops,” she said, recalling how she and her husband, Louie, learned of the birth of her 137-pound black colt on July 13.

Ê”We got a call from the office girl (at Fitzjoy Farm Riding Academy in Palos Park) and one of the trainers who works there. ‘Khaleesi had her baby!'”Ê

“I said, ‘Are you kidding me?'” as they rushed toward Fitzjoy, only to get stuck in bumper-to-bumper traffic on the way.Ê

She laughs about it now, but the drive along LaGrange Road was more than a bit stressful.Ê

“I called Michelle at Fitzjoy back,” said Georgakis, of Willow Springs. “I need to know. Is the baby OK? Are the legs straight, is the head straight? She told me everything was fine.”Ê

Upon her arrival at the stable, Georgakis said, “We went running up to the stall. There was the little baby trying to get up. It was like Bambi on iceÑno stability.”Ê

Khaleesi had given birth, alone, at about 5 p.m. following a pregnancy of 11-12 months.Ê

Georgakis didn’t even know her horse was pregnant until about five weeks before birth. Mares who are carrying for the first time don’t necessarily show until near the end of the term.Ê

“Everything was moving along really smooth,” said Doyle of new resident Khaleesi and the horse’s first 7-8 months at the farm.Ê

A veterinarian was called. Blood work was performed, and Georgakis was on a fast track to become the owner of a second horse.Ê

She had purchased Khaleesi from its previous owner in Crystal Lake, who disclosed nothing about the horse’s pregnancy.Ê

The previous owner later told Georgakis that Khaleesi had been with a stallion, but that he (the former owner) didn’t think a potential mating had been successful.Ê

Last Thursday, only five days after birth, Lazarus walked into daylight for the first time with Georgakis in towÑliterally.Ê

“I was trying to hold him,” she said of the walk from the stall to a meadow behind Fitzjoy Farm. “He’s a strong little boy.”Ê

In just those few days of life, Lazarus had already put on weight and was tipping the scale at 150 pounds.Ê

Mama horse kept a close watch on Lazarus, but so did another other horse in a nearby pen.Ê

“She’s going in circles, keeping everybody away,” said Doyle, noting that a couple more horses had moved closer for a look at Lazarus.Ê

“Any other horse gets near, and she chases them away,” she said of Khaleesi’s and Lazarus’ protector and new best friend.Ê

Georgakis beamed with enthusiasm as she watched Lazarus ramble around the meadow, never straying far from mother.Ê

“He’ll stay with mommy for 4-6 months, nursing off her, and then there will be the start of a little bit of separation,” she said.Ê

Georgakis said she has been involved with horses almost her entire life, but had been without one for a long time until acquiring Khaleesi.Ê

And she’s been a near constant companion to Khaleesi since learning of the horse’s pregnancy.Ê

In fact, after the birth, Georgakis couldn’t be pried away from the barn, sleeping in a chair next to the stall and finally stringing a hammock between wooden beams.Ê

“I spent a week in your barn,” she said to Fitzjoy’s owner, Doyle. “It sounds funny to sleep there, but it’s a nice experience.”Ê

Even before the birth, during the five weeks in which she knew Khaleesi was pregnant, Georgakis visited the horse multiple times a day. Many of the visits were after midnight.Ê

Doyle expanded Khaleesi’s stall by removing a wall to double the space for mama and her new colt.Ê

Georgakis has shared her love of horses with husband Louie, who owns and runs the Country Cup restaurant inside the Rolling Lanes Bowling and Entertainment Complex, 6301 Joliet Road in Countryside.Ê

“He works 70 hours a week and he was very new to riding,” she said. “He fell in love. It’s only been about a year.Ê

“We come here to decompress for two or three hours, to ride and relax,” said Georgakis. “Then, we found out mama’s having a baby. Game changer!”Ê

She said the chose the name Lazarus from the Bible.Ê

“I love all animals but horses are my passion,” she said. “It was so amazing to get back into horses after 15 years.”Ê

After more than an hour getting acclimated to the outdoors in the early morning before the heat soared for the day, it was time for Lazarus to head back to the stall.Ê

A handler walked Khaleesi while Georgakis took control of Lazarus.Ê

Her right hand up front and her left hand with a firm grip on the colt’s tail, Georgakis walked partially beside and partially behind the young horse, holding tight and not letting the rambunctious youngster win control. The pace back to the barn was quick.Ê

And because of the flurry of morning activity and the high-energy experience of all that is new in life, Lazarus was soon sound asleep on the straw in his stall.Ê

“We didn’t plan on this, but we’ve been blessed,” Georgakis said.