August 2, 2018/Comments Off on Protesters claim abuses continue and say Chicago Ridge Animal Welfare Board has to go 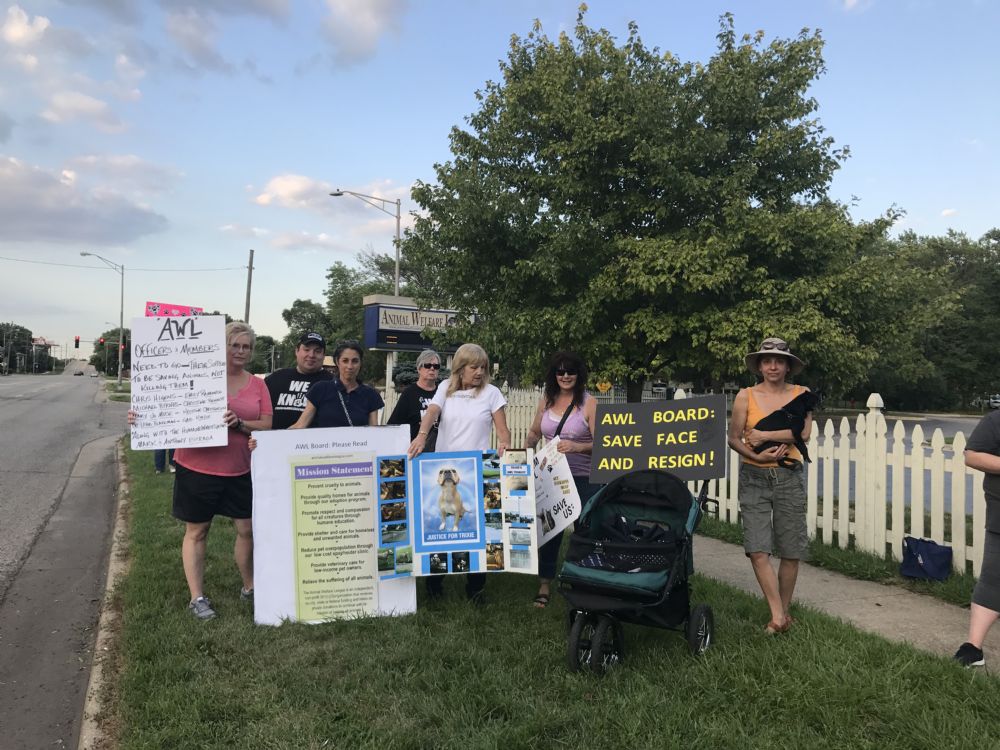 Activist groups such as Reform AWL Chicago Ridge don’t intend to stop protesting until there is a complete overhaul of the management of the shelter at 10305 Southwest Highway.

“We’re not going to go away until we feel the animals are safe,” said Shay Bonomo Nemecek, of Bridgeview. She was among a dozen or so people holding signs outside the shelter on July 25, during a protest dubbed the “Six-Month Reform-iversary” to mark the exact date in January that the first one was held.

A slogan on the sign she was carrying read “New director, new board, new AWL.”

The protests began after an outbreak of canine flu in December led to an extended suspension of animal adoptions and surrenders at the shelter. The animal rights activists, including many former employees and volunteers, said the outbreak was just a symptom of bad management and care at the shelter, which serves 54 communities and houses hundreds of dogs, cats and other animals. They blamed longtime executive director and board president Linda Estrada, whom they accused of housing animals in unclean conditions, threatening staff and volunteers, and providing substandard medical care to animals.

Estrada resigned in early May and was replaced as executive director on an interim basis by Diane Spyrka, who also is director of the AWL shelter in Chicago. The quarantine was lifted about that time, and other changes were to be announced in the coming months. But the activists who also held a protest on July 17 believe not enough has been done to improve conditions in the shelter.

“Shelters are needed, and more of them. And there are staff and volunteers there that do care for the animals. But we expect much more from the board of directors,” said Bonomo Nemecek.

The board of directors are volunteers, but the activists said they should step down after problems at the shelter came to light.

“How about a little humility from the board?” asked Magda Moktaba, of Palos Park, who used to volunteer at the shelter. “What’s very upsetting is the board is the same one that has been there when all this bad stuff was going on, and they haven’t done squat.”

“Some of the directors might love animals, but more than compassion is needed. You need skills, too,” said Moktaba.

“It’s actually getting worse (since the change in directors),” said Matthew Kirchhoff, a leader of Reform AWL at the protest who was a volunteer himself 20 years ago. “They have gotten rid of a lot of the volunteers.”

Moktaba said her father was among the volunteers who were summarily let go.

“He spent 15 hours a week there, feeding and walking dogs. He didn’t bother anyone and was very upset when he was told he was being let go.”

“We all love dogs. That is why we are here,” said Dolores Naughton, of Burbank. “But they should be looking for qualified people to serve on the board.”

The activists also assert that the shelter is not working enough with rescue organizations that would take dogs that would otherwise be euthanized. They said some individual rescuers are no longer allowed to come into the shelter, due to their activism. But that could not be confirmed.

When a reporter reached Spyrka by telephone, she declined comment and referred calls to Chris Higens, the president of the board of directors.