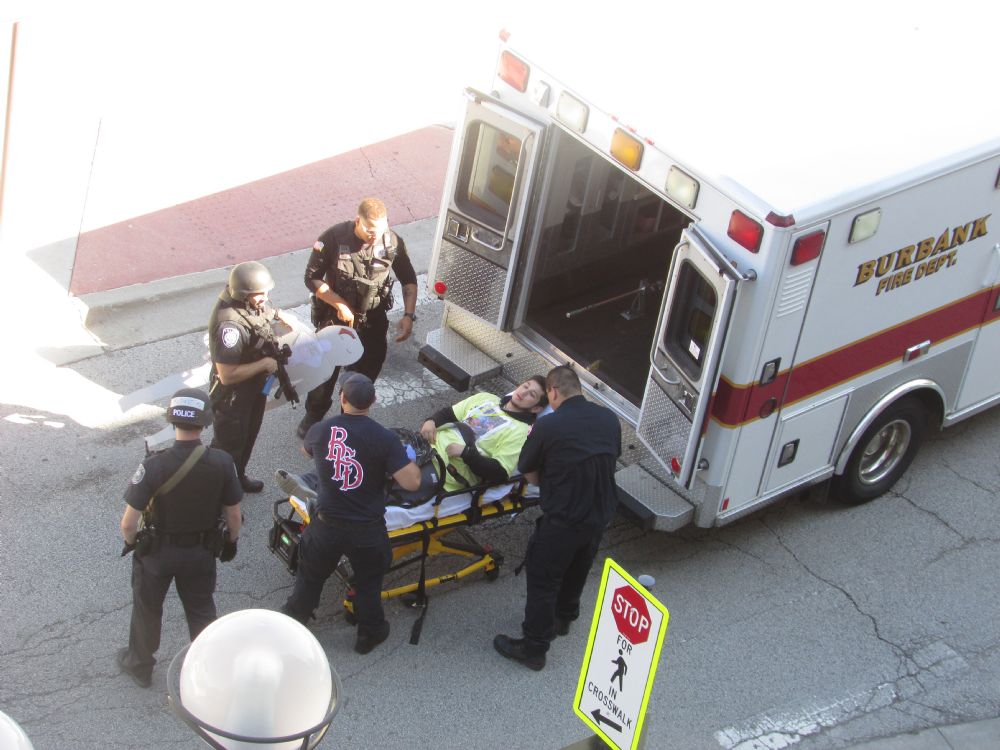 More than 800 people from throughout

the southwest suburbs participated in a full-scale emergency training exercise

in Oak Lawn on Sunday, turning the Metra station and surrounding area into a

communities, as well as local students and medical staff at Advocate Christ

Medical Center took part in the exercise dubbed “The Guardians of Gotham,”

Burbank, Bridgeview, Alsip, Hometown and Metra participated in the exercises,

along with firefighters and paramedics from most of those communities, and the

With a Metra train in position at

what is known as Patriot Station in downtown Oak Lawn, the events began with a

realistic-sounding explosion on the platform. When police rushed in, an “active

firing down, apparently badly injuring one of the police officers, who fired

back before rolling behind a bench to wait for rescuers.

With media, local officials such as

supervisors from the fourth floor of the parking garage. Police and paramedics

school students, were seen coming out of the train station and nearby

Children’s Museum, either hobbling along or were carried out on stretchers.

Throughout the exercise, supervisors

by Securonet, a Minnesota-based security company. They explained that in a real

situation, the same types of cameras could be used in schools and elsewhere.

“It’s fascinating to watch. The scale

of it is amazing,” said Burke, whose office is located across the street from

“With Oak Lawn being the biggest

community in the area, and the hospital is here, we are usually the focal point

“Hopefully, we will never have to

respond to something like this, but the first-responders have to know what to

do. In the past, firefighters and paramedics would wait until the shooting had

stopped to move in. But since the mass shooting in Las Vegas, they are being

trained how to respond to what is called a ‘warm zone,’ when the shooter still

He pointed out how the medical

personnel were being escorted in and out of the danger zone by teams of police.

Finnelly said the police also had to

“Any opportunity to train for an

“This is realistic, because what

would happen in a real situation. Personnel from all the departments coming

together. But they have to practice working together, so they will have

confidence and trust in each other if it ever happens,” said Galske.

He said the five Chicago Ridge

who were not there.

The whole exercise at the train

station was wrapped up in about 45 minutes, which the police said was a good

indication of how efficiently everything was done.

The action then transferred to Christ

Hospital, about a mile away, where Dr. Liz Regan, an emergency medicine

preparedness, oversaw the drill. Media were kept away from that location, but

by all accounts, everything went well.

Hospital officials said that in 2017,

18 mass shootings occurred in the United States, including the deadliest in

modern U.S. history, when 59 people were killed in Las Vegas on Oct. 1. Because

the Chicago area, Regan stressed the importance of planning for disasters by

educating and training hospital staff, and working with community partners to

prepare for such occurrences.