November 29, 2018/Comments Off on After 3 years as interim fire chief, Bridgeview officially gives job to Daly 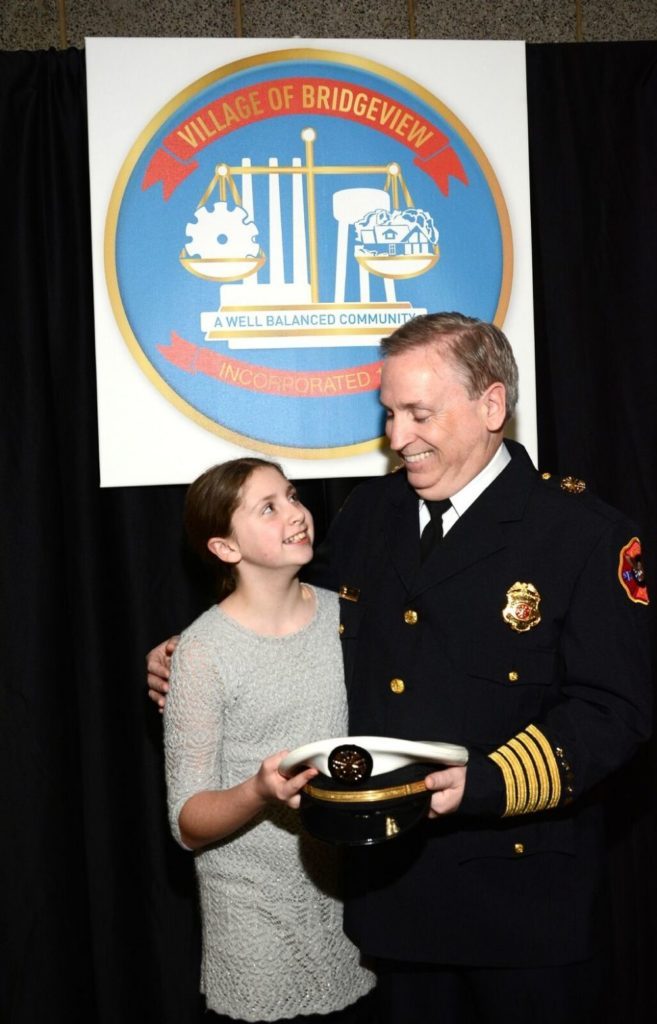 When he was a kid, Michael Daly wanted to be a firefighter.

“It’s something that always interested me. I liked how it was challenging and exciting,” he recalled. “I like that you can have an impact on the people around you. It’s a job where you can see the difference you make.”

Now, after three years as acting chief, he officially is the new fire chief of Bridgeview. Daly was sworn in at the village board meeting of Nov. 21.

“It is great to be sworn in as the chief,” Daly said.

Mayor Steve Landek said: “Chief Daly grew up in Bridgeview and established his career as a firefighter in his hometown. He cares about his community and we are proud of his accomplishments.”

In 2005, he became a battalion chief, and served as acting chief since September 2015 when former chief Tony Butkus retired.

As chief, his duties will be managing the fire department instead of also managing one of the three shifts as a battalion chief. A shift is 24 hours on duty followed by 48 hours off, he said.

Bridgeview has a total of 27 people working in the fire department. “We’re about three people short right now. We’ve hired five or six in the past three years,” he said.

Being a firefighter means “it’s never the same every day.”

“It’s an exciting job,” Daly said. “It’s rewarding and people come into this job because there is an element of excitement, an element of variety. You can’t predict a day when you walk in the door.”

The biggest fire he’s worked on was probably was the Unocal fire in 1988.

“I was a paid on-call firefighter and it was a pretty large fire. Unocal made latex paint. The factory was torn down after the fire. I think I’m the last person in this building to have gone to that fire,” he said.

Regarding the department’s immediate future: “We’re doing some upgrades to our software and reporting, communications equipment in the form of portable radios we’ll put into service soon.”

Daly will also have a new ambulance soon. The board approved the recommendation of the RFP ambulance committee to purchase an ambulance for $236,458, from Fire Services.Ê It is scheduled for delivery by March, Landek said.

Daly, who grew up in Bridgeview, said, “this is a job I like to get up in the morning and come to.”

“That’s important. So many people go to work and don’t like what they do. I was born in Bridgeview. My parents were here since 1959,” he said.

Daly has an associate’s degree from Moraine Valley Community College, a bachelor’s degree in fire service management from Southern Illinois University through an extension center at Triton College, and a master’s degree in public administration from Governors State University.