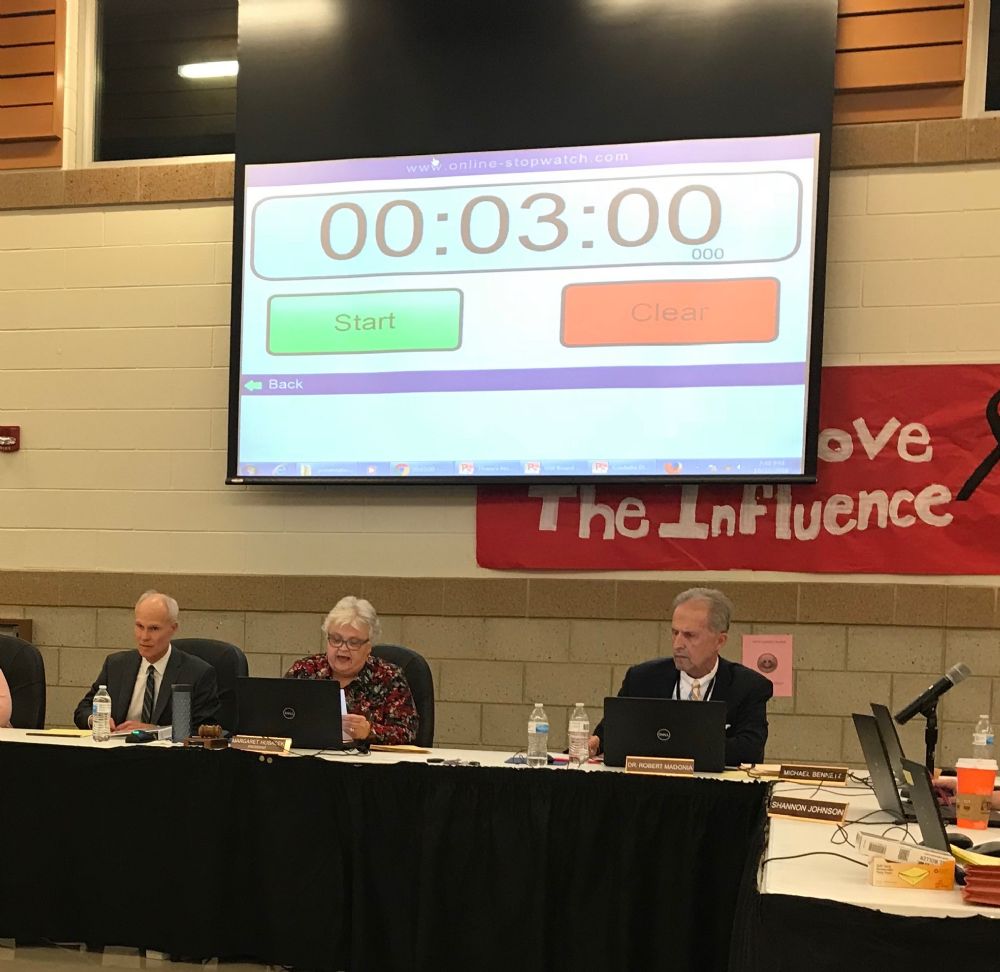 Board was wrong to cut off

Madigan issued an opinion on Jan. 9 that the

enforcing an unestablished and unrecorded rule limiting the public comment

portion of the meeting to 15 minutes.”

The decision was sent to both Board President

Marge Hubacek and Hinsdale attorney Martin Stack, who filed a complaint with

the Attorney General’s office after the meeting.

In her ruling, Madigan directed the school board

“to take appropriate action to comply with this opinion by refrainingfrom

applying unestablished and unrecorded rules to restrict public comment at

compliance with (the Open Meetings Act).”

About 200 parents and local officials attended the

Oct. 22 board meeting to demand answers about the hiring of Andres Rodriguez to

teach sixth-grade English. It was later discovered that Rodriguez had been

murder after shooting a man seven times during a traffic dispute in Tinley Park.

The district suspended Rodriguez once the charges

because “we had to go through the proper procedures, the protocol. “We did what

Critics of the hiring claimed Rodriguez was hired

information that he was facing felony attempted murder charges.

Critics of the hiring said Hubacek and her

supporters ridiculed them during the meeting and closed the public discussion

period after 15 minutes. Only five people were allowed to speak and she turned

away dozens of parents who wanted to ask questions aboutthe

One of those who tried to speak was McCook Mayor

and Cook County Board Commissioner Jeff Tobolski. Hubacek denied him access to

the microphone and closed the topic.

“If she prevented an elected representative of

hundreds of thousands of people from speaking, how does she treat the parents

in the district? Does she even listen to them? Does she care about them?

Parents should be concerned. I was concerned and that is why the complaint was

filed,” Stack said after the Attorney General’s decision was released.

“Chairman Hubacek broke the law when she stopped

agreed. People should be free to express their opinionatboard meetings and not be subjected to the whims

of petty tyrants. In this case, the board majority thought they could keep a

gunman’s hiring as a teacher a secret. After that information became public,

as parents addressed the board.”

who opposed Hubacek’s decision and raised the issue about Rodriguez’s hiring,

should immediately reconvene a new meeting to allow parents to speak.

“Marge Hubacek has abused her powers since taking

over the board. She has politicized the board’s actions and pushed aside the

interests of the students and their parents,” said Torres.

“The board should immediately reschedule the meeting

opportunity to ask questions. Hubacek has tried to brush this controversy under

the rug without answering questions including many concerns that Rodriguez was

hired because he knows someone on the board.”

Calls for Hubacek to resign were made at a news conference held by Tobolski,

sponsoring legislation that would require anyone hired by any school district

those facts when applying for any school employment position.

“There needs to be consequences for Hubacek’s actions,” said Torres, who is heading a slate of

candidates seeking to oust Hubacek in the April 2 consolidated election.

are running on the Parents for Student Excellence slate.

she has no intention to resign.

she said after the October meeting.