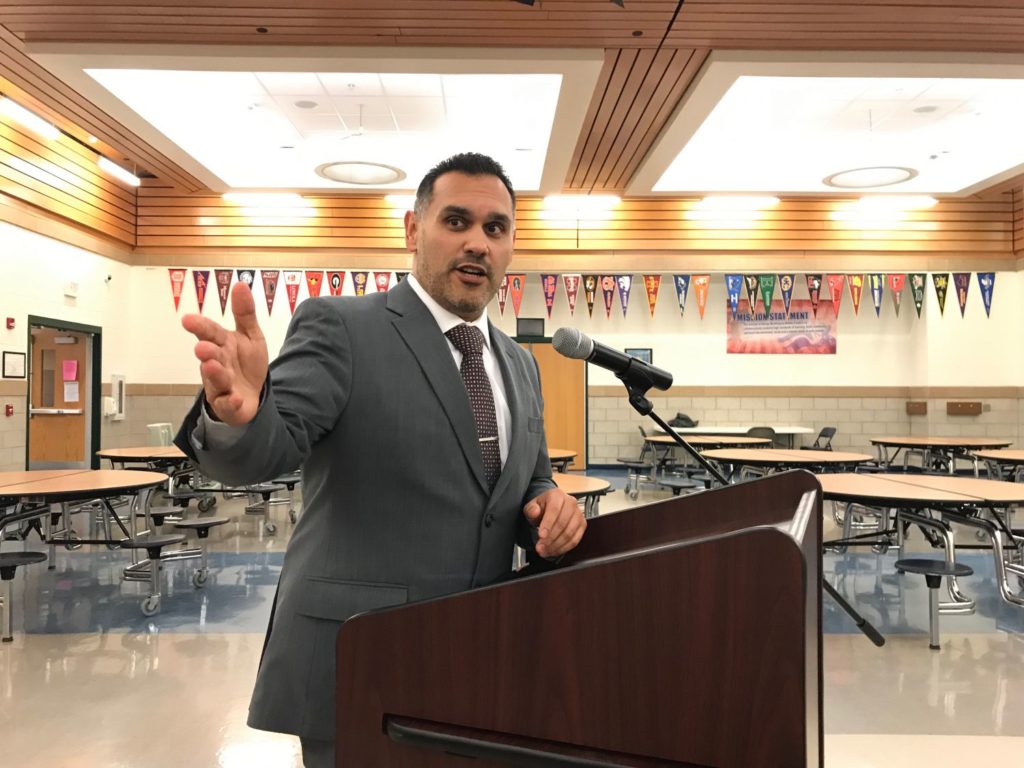 School District 103, has spent his entire career working in the larger Hammond,

Lyons, however, is going to be a good fit, he said.

The school board obviously agrees, voting 5-1 to approve the

hiring of Kristopher Rivera during a special meeting held on Feb. 5.

of his thoughts about Rivera, Torres said, but rather a comment on the hiring

After the meeting, Torres was the first board member to leap

up and shake Rivera’s hand, wishing him the best of luck. Torres said he voted

“no” because of negative comments directed at Torres by acting Supt. Patrick

Patt at a previous meeting.

Focusing on the immediate future, Rivera, 43, will be a

frequent flier at board meetings, even though his official first day on the job

is not until July 1. He wants to immerse himself in the district, and learn all

he can in order to have a smoother transition.

Rivera resides in Hobart, Ind., with his wife and their five

He is assistant superintendent for human resources in

Hammond, which has a diverse student population. His entire career has been

“Hammond is diverse and high poverty. Coming to Lyons, a

high Hispanic population, diverse, and they have that economic dynamic I’m

He was hired just 12 day after his first interview. On Feb.

5, before the meeting in Lyons, some board members visited the Hammond school

district to learn more about Rivera. They were impressed with what they heard,

“They didn’t want him to leave Hammond,” she said.

He’s been in his current position for six years, was a

school principal before that for three years at Scott Middle School. Prior to

that he was assistant principal at Scott for four years. He also taught in the

district before joining the administration.

Leaving is “bittersweet but I felt ready for the next step.

It all happened really quick. During the second interview (on Jan. 29), I

locked in when I did the tours of the buildings, met some parents, interacted with

He’s not concerned about joining the politically charged

lead them. I work with a board now that has differences of opinions. A lot of

that comes down to communication.”

The politics on the board “needs to be dealt with” adding

“my leadership style will squelch some of that.”

“Once a vote is taken, we’ve got to get behind it. I’ve read

articles. I’ve done my homework. One thing we have to is stand together. It

does no good to disagree and fight in public. We can’t do that,” he said.

after the first choice had turned down the job].

“I don’t worry about things I can’t control. It doesn’t hurt

my feelings. I know who I am and what I want to do.”

He said he has an “inclusive” management style. “Strong

communication is important as well as including individuals in the

Hubacek and other board members expressed confidence that

Rivera will do a good job.

board a better insight into Rivera’s leadership abilities. Hammond school

officials, he said, were impressed by the attention to detail.

for his first year.

“I’m very excited. I can assure you I’m going to work hard,

going to work with you. This is the type of community I want to work for and

work with,” Rivera said after the board voted.

“First of all, he wants to be here. He’s committed to the

district. We spent the whole morning there meeting with different people

You could tell by their body language, how they talked about

him, we heard ‘please don’t take him from us’ and ‘problem solver,’ which is

what our district needs,” Hubacek said.