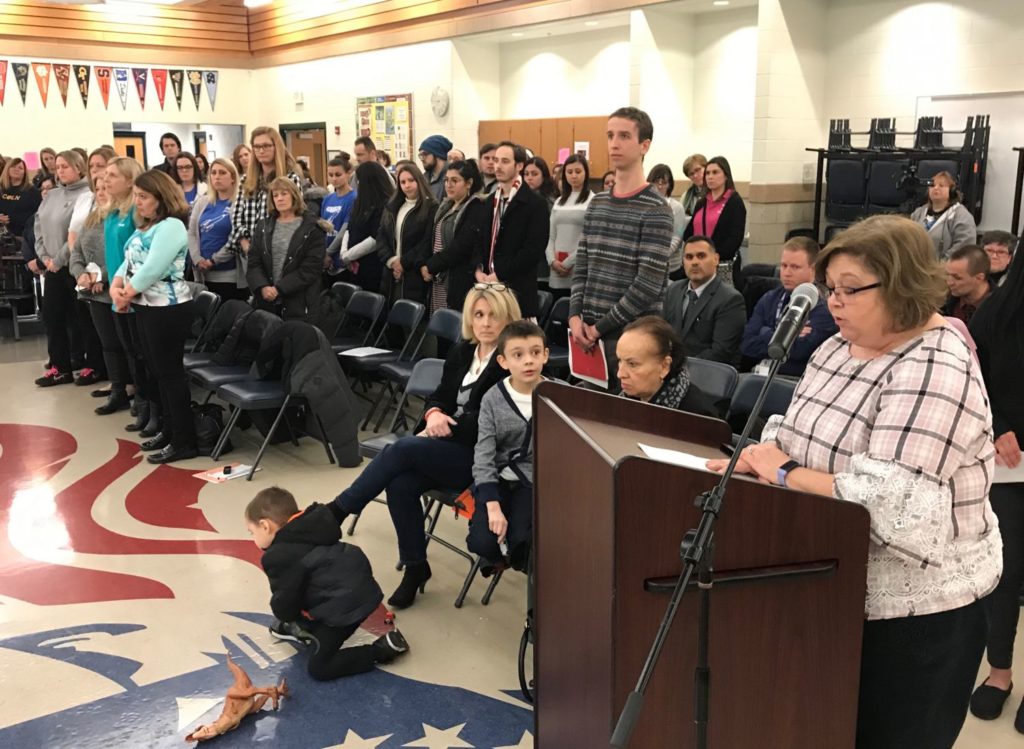 Principals under fire in Lyons SD 103

The jobs of two principals in Lyons School District 103

appear to be in jeopardy.

Tara Kristoff, the Lincoln School Principal, has been on

Al Molina, in his 14th year as principal at Robinson School,

has received a stunning “no confidence vote” from 26 of 27 teachers there,

During the meeting, the school board twice went into

executive session to discuss “employment, compensation and performance of

specific employees,” according to the agenda.

Afterwards, board members declined to name the employees

they were discussing. But, given the turnout by Lincoln and Robinson teachers,

it wasn’t hard to figure out whom those three hours were spent discussing.

are being handled by Andrea Maslan, former principal of Costello School.

The board extended Maslan’s part-time contract from 100 to

120 days, giving her time needed to complete the school year, board president

about their principal’s status. A note on the website apologized for that.

Maslan, who retired as Costello principal “when the politics

took over,” was a curriculum consultant in the district office before moving to

In a stunning moment, teachers at the meeting stood in

February to discuss Molina. Of those teachers, 26 cast votes of “no confidence”

The vote was delivered to the school board on Feb. 14, she

at Lincoln School who are also struggling with their building principal,”

Asked why the vote was taken on Molina in his 14th year,

Jackman said, “that’s a long time, a lot of stuff.” She declined to elaborate.

She said the teachers standing were a show of “supporting

each other in their individual school situations.”

Molina, contacted at school early Tuesday, said he was

“confused” by the vote.

to say it, but I think there is a personal vendetta against me,” Molina said.

Gonzalez spoke highly of Molina: “I’ve known him for 15 years now and I’ve

never had any complaints about him,” she said.

“On Feb. 15, it was brought to my attention by another

parent who was told by a staff member at Robinson that Mr. Molina was not going

to return for another school year. I’m very upset and disappointed because he’s

been a great educator and a great leader,” Gonzalez said.

She’s gathered 30 to 40 signatures from parents who support

“He’s always been good to me and my children. If I had an

issue with a teacher, he helped me. I was very disappointed when I found out

about this vote. When I saw all the teachers standing up, I was dumbfounded. I

School board member Shannon Johnson, a teacher in Glencoe,

Hubacek, who has worked in the district 33 years, said she’d

never before seen a no-confidence vote.

Hubacek said the teachers standing “was a show that they

were supporting the union, not that they were here anti-board.”

Asked about the executive sessions, she said, “we had a

personnel issue. No action will be taken until the March board meeting. That’s

typically when we make staffing decisions.”

Hubaceck said, “there are a lot of scenarios that can

happen. He can be back at his position, he could be somewhere else, he could

decide to leave. The board has to really think about this. They may talk about

it again. But we don’t take a definitive vote until March.”

Principals typically have one-year contracts. So, rather

than firing the principals, the board could simply decide to not renew the

contracts, thus ending their employment. Kristoff is in her first year at

Patrick Patt, one of two interim superintendents in the

district, declined to comment about the meeting “unless you tell us who leaked

Patt referred to a copy of the Feb. 14 letter from Dr.

administrative leave for failing to follow directives, for making “derogatory

and false statements” about he and Patt, and for “unprofessional and

The Desplaines Valley News does not reveal confidential

By JERRY NOWICKI & PETER HANCOCK Capitol News Illinois [email protected]is.com State Sen. Darren Bailey, who gained statewide notoriety challenging Gov. JB Pritzker’s pandemic executive order authority in court, will be the incumbent’s challenger in the November general election. As of about 9 p.m. Tuesday, Bailey had carried over 55 percent of the GOP vote from…