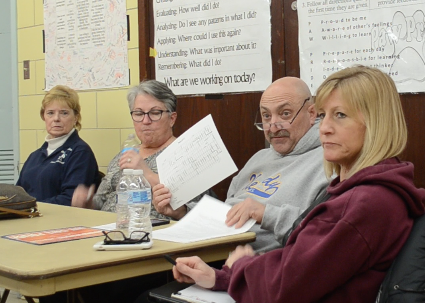 A call to fight crime in West Lawn by forming a neighborhood watch group attracted about 25 people to a public meeting earlier this week.
The call came from a woman who used a local Facebook group to get the message out. She reserved a room at West Lawn Park for the meeting on Monday evening and spoke briefly at the meeting’s outset. She said she would be willing to be an active participant in a neighborhood watch group, but is not willing to lead it. In fact, she told the Greater Southwest News-Herald she did not want to be quoted or named in a newspaper article.
So the currently leaderless group’s meeting was instead led by its invited guests: Judy Mytych-Ollry of the Clearing Night Force and Al Cacciottolo and Michele Doherty of the Garfield Ridge Neighborhood Watch.
It was familiar ground for the GRNW, possibly the most successful neighborhood watch group in the Chicago area. To date, GRNW members have helped start crime fighting groups in Scottsdale, Central Stickney, Oak Lawn, Hegewisch and other communities.
Also at the head table was longtime West Lawn resident Barb Ziegler, who was there as a representative of 13th Ward Ald. Marty Quinn’s office. Ziegler is possibly the best-known civilian crime fighter on the Southwest Side. She is the longtime facilitator of CAPS Beat 813/833 monthly meetings at West Lawn Park, as well as the leader of the Chicago Lawn (8th) District’s volunteer court advocacy effort.
Almost all of the talking at the meeting was done by the four people at the head table. Ollry discussed the history of the CNF, created in the wake of the 1995 slayings of two grade school girls near Hale School. Cacciottolo and Doherty talked about the GRNW, created about a decade ago with assistance from the CNF, after a Garfield Ridge youth was beaten by a gang member.
Both the CNF and GRNW have been credited with helping reduce crime in the central and western sections of Clearing and Garfield Ridge, respectively. Cacciottolo claimed that crime has been reduced by as much as 40 percent in Clearing and Garfield Ridge, thanks in part to neighborhood watch groups.
They walked the audience through the logistics of starting and running a neighborhood watch group, which they carefully indicated is not a forum for vigilantes or wanna-be law enforcement officers.
“We are just additional sets of eyes and ears for policeÑnothing more,” Mytych-Ollry said. “We don’t get out of our cars, we don’t confront criminals or suspects. We just enhance awareness for police.”
The two neighborhood watch groups also work on “quality of life” issues, calling 311 to report graffiti, potholes, burned-out streetlights and more.
“Those improvements start sending a message that people who live here care about their neighborhood,” Mytych-Ollry said, noting that such a message promotes community cohesiveness and makes it more likely that good people will stand together against crime.
Both groups have, over the years, succeeded in getting “nuisance” businesses to change their behavior and/or leave the community.
As much as they have achieved and as successful as they’ve been, Cacciottolo told the West Lawn residents not to try to do everything at once.
“Don’t worry about too many details,” he said, recalling that the 125-member GRNW started with just three or four people. “Crawl before you walk.”
Ziegler, who jokingly referred to herself as “the nosy neighbor that everyone’s afraid of,” noted that she’s been a civilian crime fighter and community organizer for 20 years. She addressed the fears of some in audience.
“The first house that I targeted was a drug and gang house we had on the next block, and these guys were really bad guys,” she recalled. “There was a shooting at 62nd and KilpatrickÉthe mother owned the house. The big brother lived on the second floorÉbut younger brother was the problem. He was the one that had gotten shot.
“I’ll tell you something–every time that kid drove past my house, when I was mowing the lawn, it bothered me,” she continued, making the sign of the cross to underscore her apprehension. “It did. But you know what? After 14 court hearings, they’re gone and I’m still here–and nothing ever happened to me.”
Ziegler urged everyone in the audience to start attending CAPS 813/833 meetings “because every month we have 50 to 60 of the best people you’ll ever find; and you could talk to them and possibly get them to join your group.”

Most of West Lawn lies in either Beat 813 or 833. The northeast corner of West Lawn (north of 65th Street and east of Pulaski) lies in Beat 823.

After the meeting, some audience members spoke with each other and talked about next steps. It was agreed that neighbors would attend the next CAPS 813/833 meeting, set for 7 p.m. Tuesday, March 26 at West Lawn Park, 4233 W. 65th St., and then meet afterwards.
“We have to take a look at what’s going on our neighborhoods, because there’s no such thing as Mayberry anymore,” Mytych-Ollry said. “You can bury your head in the sand or you can be realistic and say, ‘I can work with others and I can make my neighborhood safer and better.’ As long as you care about your community, you’re halfway there.”
(Editor’s Note: More news coverage and photos in the print edition of the Southwest News-Herald, available on local newsstands. Or better yet, call 708-496-0265 during weekday business hours and order convenient home delivery for about 50 cents a week.)