April 24, 2019/Comments Off on Stagg standouts to share passion for softball 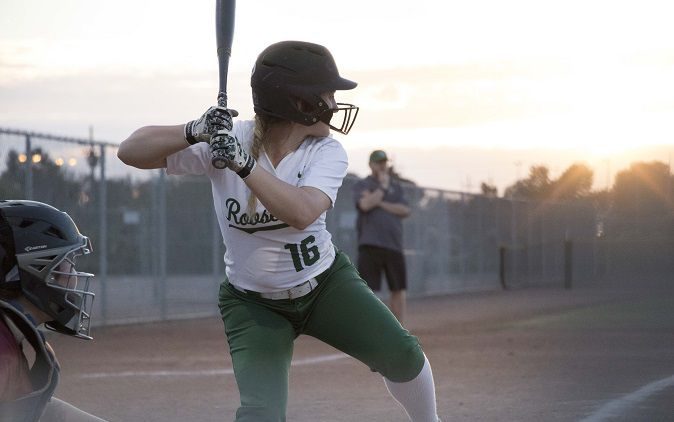 Will take part in free clinic at Bandits Stadium

Amber Green, of Palos Park, and Kassie Kawka, of Palos

Hills, may be two years apart, but they have much in common: both grew up in

Today, they share the field at Roosevelt University as

starters for the Lakers. And they share their passion and skills with young,

As part of the Lakers’ second annual Pack the Park and

teammates, and Head Coach Aaron Moore are hosting a free softball clinic at

The clinic is open to softball players from the third to

eighth grade, followed by a demonstration of the Lakers’ own skills as they

Bandits Stadium is a familiar setting for Coach Moore, who

spent seven years as the GM of the Chicago Bandits. His teams won three NPF

to coach the Lakers.

Green and Kawka have distinguished themselves at Roosevelt

moved from left field to center this season, earning a 1,000% fielding

percentage and .330 batting average. Kawka, a freshman, is batting .350 and is

third on the team in RBIs.

All-Academic Team, reflected on how she found her own passion for softball.

and never looked back,” she said. “I played baseball for some time while I was

playing softball, and I think that’s when my passion for the sport really

started. My dad was my softball coach from age 7-18, so he was the main

influence that helped me along the way. He made sure I worked hard for all my

successes and never to settle with being mediocre.”

stepped on the field. He taught me to grind through the tough times and

celebrate my successes. He was able to push me to become a better softball

As a young White Sox fan, growing up during their glory days

of the early 2000s, she had her share of role models among the team that won a

“My biggest role model growing up was (White Sox captain and

games and my eyes being glued to him. He had a lot of passion for the game,

which is something that I model when I play as well.”

She is modeling Konerko’s work ethic as well.

“With more practice and grind, the better you become at

playing the game,” said Green. “Since coming to Roosevelt, I’ve become much

more instinctual when I’m playing, and I’ve improved in every part of the game

For those attending the free softball clinic, Green hopes to

make a connection with young athletes who love the game. “They can ask us

questions, learn from us, and get feedback from us while learning more about

softball. I hope that the ones attending the clinic leave more inspired than

clinic is over,” she said.

With graduation in 2020 looming, she sees herself following

in her Dad’s footsteps.

“I hope to be able to coach one day after I graduate. Just

and being in college.”

ball for the Chicago Chiefs as a child, the biology major said, “I’ve loved it

ever since I picked up a bat, and my coaches have encouraged me a lot to keep

playing,” she reflected. “Stagg softball was a lot of fun for me. My sophomore

to senior year I had really great coaches, and our team was pretty close.

Probably some of my favorite years playing softball.”

“I’ve had many coaches throughout my softball career and I

Brown and Coach (J) Hawker from Stagg, they were great coaches who I felt close

with and made softball a lot of fun for me. And then Coach Kym, who I had for

my last year of travel ball. She was who helped me get signed to Roosevelt.”

Another trait the two players share are their pick of first

basemen as role models. While Green lists herself as a White Sox fan, Kawka

looks to the North Side for role models. “I’ve always looked up to professional

baseball players and other pro athletes growing up,” she explained. “I think

does a great job all around. Sometimes I’ll go into hitting slumps, but I have

a pretty good glove in the field.”

Since she came to Roosevelt, the influence of Coach Moore

has improved her game.

“I’ve really noticed myself become a better player all

around during my first year here at Roosevelt. Coach Moore has pushed me a lot,

and really believes in me. I think my game has improved a lot mentally, and I’m

looking forward to improving more and more,” she said.

And if she continues on this path, the path may lead to

at Roosevelt, and then focusing on my career, but I’ve had thoughts about

playing in the NPF. So, we’ll see what happens once I get closer.”

For more information on the Roosevelt University’s second