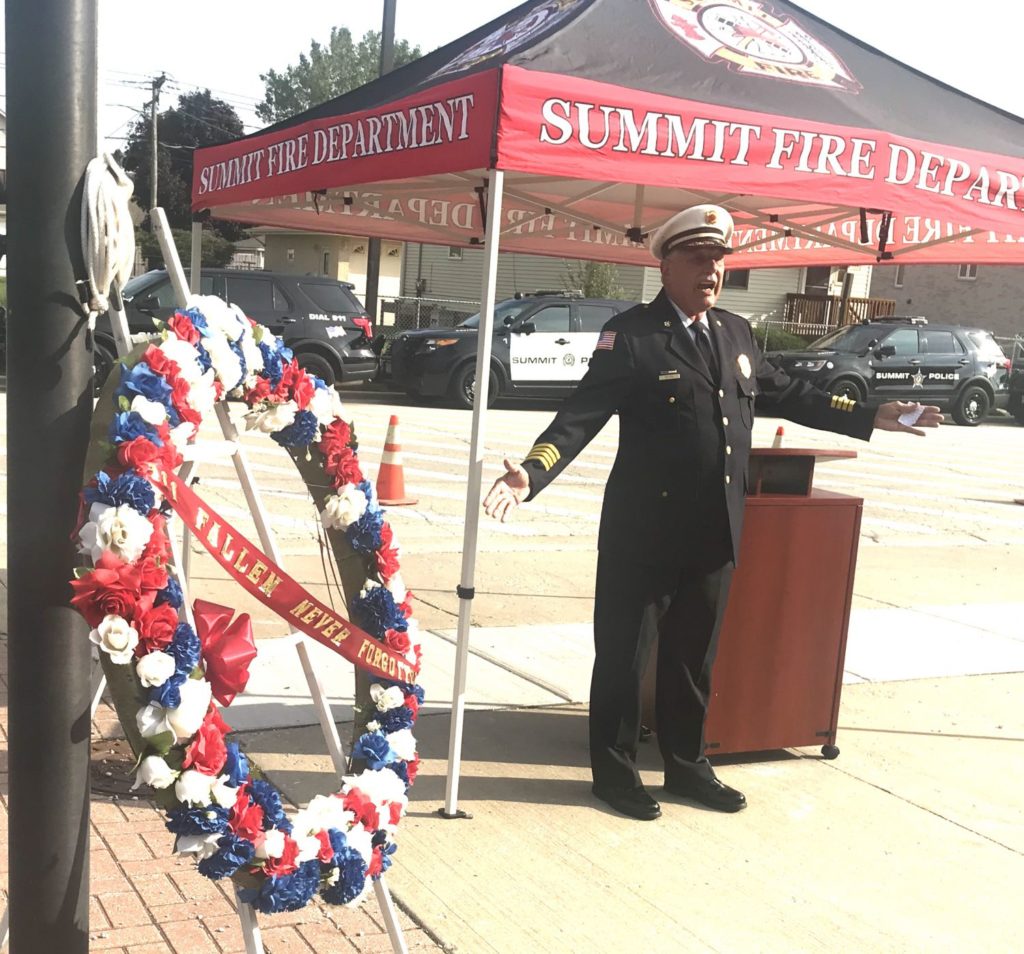 Wendy Esposito will never forget the “eerie quiet” of that September

“There was not a plane in the sky. Not a bird tweeting. No wind. It was

“There wasn’t any traffic. I think everyone just went home, held their

families and thanked God they weren’t in the mess that we were in,” she said.

A brief ceremony recalling those terrorist attacks started at 9:11 a.m.

Wednesday beneath sunny skies in front of the Summit firehouse on 59th Street.

Deputy Fire Chief Frank Batura said, “It’s up to us to remember with

ceremonies like this, to instill in future generations that regardless of how

we are attacked we still are the greatest country in the world.”

After placing a floral wreath at the flagpole, he said that while there

may be future attempted attacks, “I don’t believe we’re ever going to let our

guard down any more.”

the fire department chaplain, said a prayer in which he thanked God “for the

peace you give in our hearts despite everything that happens in this world, all

“Help us to remember, Lord. Help us to move forward, creating a better

Addressing those who had gathered, Summit Fire Chief Wayne Hanson said it

“People are still dying from this incident. First responders. Police and

fire. The public who worked at Ground Zero … This was a day that changed our

and children were killed that day,” Hanson noted.

Excluding the 19 hijackers of four planes, 2,977 people were killed that

“They were business people, bankers, lawyers, engineers, people from all

walks of life who never had a clue,” Hanson said.

Americans, Hanson said. “It was a normal Tuesday morning. I didn’t believe it

Nor did Pastor Windle.

laundry. His family was traveling the country, talking at churches about

recently completed missionary work they had done in South America. His parents

“My mom brought us in from the RV, said we had to see something. I thought

we were watching a movie. It was the second airplane hitting the tower,”

“It didn’t dawn on me what was going on, except it was really weird

everybody was glued to the TV,” he said. “It’s an incredible turn of events in

Then a Cook County Sheriff’s deputy, Esposito learned of the attacks after

roll call. At first, she thought it was someone’s idea of a cruel joke. She

“We were put on standby. They told us they were getting buses in case we

had to be deployed. Sears Tower. John Hancock. Thank God. We were fortunate,”

she said. “This was terrorism, pure and simple. There was so much tension.”

“Like I said, that night, sitting out front … it was so quiet. It was