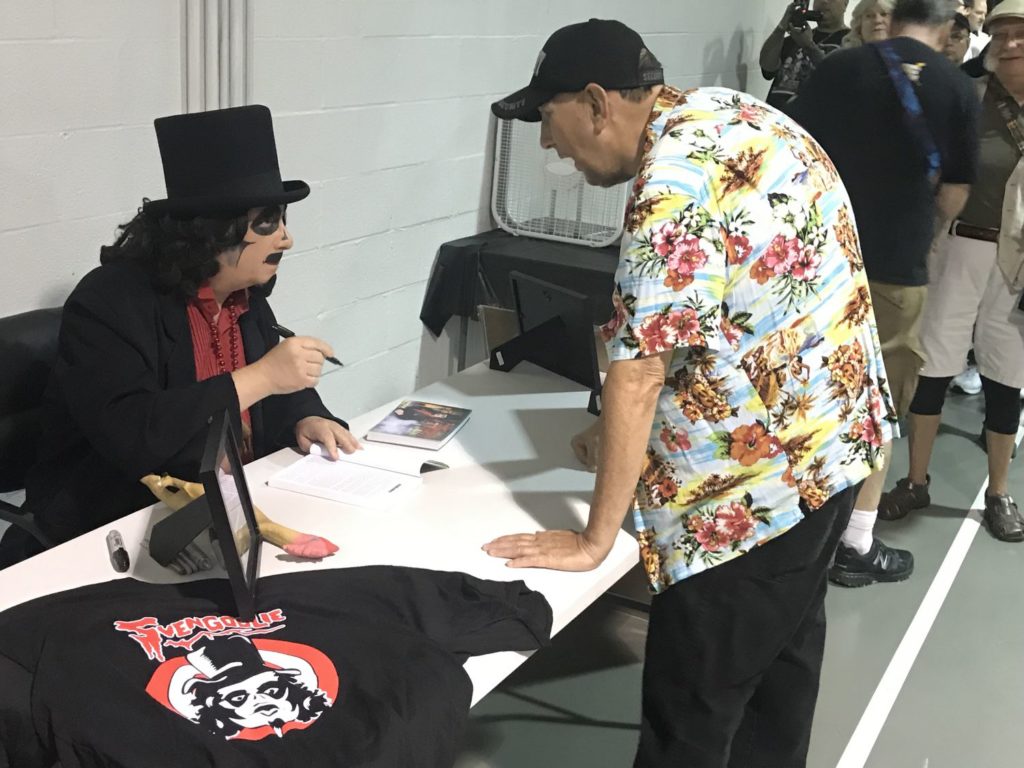 ‘I ain’t afraid of no ghost’

Visitors to the Bridgeview Park District on Saturday probably knew

something was different when they saw three hearses parked outside.

Surely, the arrival of Svengoolie, the king of scary movie shows, was the

tip-off something was a tad different.

The Unknown World of the Annual Paranormal Convention, made its Bridgeview

The convention was the idea of park district event coordinator Kylie

O’Connell, she of the scary makeup and purple streaks in her brunette hair.

“I wanted it to be an event for the community and the spirit world,”

“It’s something I wanted to do for a long time. I’m hoping to make this an

annual event, an educational spiritual gathering,” she said. “The paranormal

Plenty of enthusiasts showed up. They were treated to talks by paranormal

investigators, shopped for books and other scary trinkets, had their palms

read, and found out what the tarot cards predicted.

“Tarot cards next. I already had (a palm reading). It was pretty

accurate,” Amanda Braatz, of Oak Lawn, said of the $5 palm reading by Summit’s

“He basically knew who I was. Maybe it taps into a part of our brain we

hoping for no big surprises.”

Skeptics were few and far between. This was for those whose favorite TV

series may have been “The X-Files.” They were more like the curious Fox Mulder

than the skeptical Dana Scully.

time.” They came in with an open mind, they said.

folks $10 for a rubber chicken to be signed by Svengoolie. Hey, 47 people anted

To his credit, Sven stayed an extra half hour as he chatted with fans,

signed autographs and posed for photos.

Cliff Hupke, of Justice, the first one in line, was thrilled to visit with

Lynn Johansen, of the Hardcore Hearse Club, urged visitors to buy a hearse

like hers. It was parked outside, the hearse with the hood scoop.

“My beast,” she said. “I get reactions of disgust and fear, and I get

Allison Jornlin, a paranormal investigator from Milwaukee who with her

“I went back and forth for many weekends, visiting all the locations. The

bulk of the reports, there’s something in the details that doesn’t match up

with reality,” she said. “It was disillusioning for me, but say something like

that did happen. What’s the best way to discredit it? A bunch of bogus

After visiting with Jornlin, Gil Scigalski, 61, of Burbank, said “it’s

nice people of a like mind can chat with each other.”

“I’ve had a few paranormal experiences,” he said, recalling how he began

thinking of a former supervisor 12 years after the fact, only to run into her a

few days later. “It was a precognitive thing.”

Physical responses like that are indicators something paranormal likely

took place, said Jornlin, who has had her share of spine-tingling moments.

A big crowd attended a presentation from Neal Gibbons and Steve Lenweber,

of Graveside Paranormal. Using their machine called an “ana-hata,” they said

they captured voices of the dead at the infamous Bachelors Grove.

And creepy voices are heard on his recordings from Bachelors Grove, the

Country House restaurant, and at Irish Legends. That restaurant on Archer

Avenue in Willow Springs is one of the more haunted places in the area, he

And what about Resurrection Mary, the alleged sprit of a young woman who

shouldn’t be out smoking and drinking and dancing. I believe it’s a story that

took on a life of its own. It was probably made up to stop girls from doing

what they were doing,” Gibbons, of Orland Park, said.

After listening to Gibbons’ presentation, George Barzydlo Jr., of

Chicago police officer, once saw a ghostly figure in Florida.

“He saw this thing come down the stairs. It was a female. Straightened her

hat in a mirror and disappeared. My mother was into this stuff. He always gave

her garbage about it. After that, he never said a thing,” Barzydlo said.

“Keep an open mind is all I’m saying,” he added.