Skip to content
December 27, 2019/Comments Off on Anticipate rush for legal cannabis 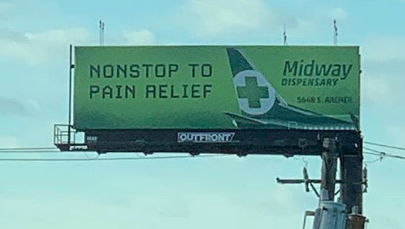 With cannabis about to become legal for recreational use in Illinois, the Southwest Side’s two medical cannabis dispensaries are expecting a rush of customers when they open their doors in 2020.
A nearly tenfold increase in customersÑfrom 50 a day to as many as 500Ñis anticipated at Maribis of Chicago, 4570 S. Archer, Maribis Agent-in-Charge Jason Romo told the Greater Southwest News-Herald.
If that prediction proves accurate, Maribis will see nearly a customer a minuteÑon averageÑfrom 9 a.m. to 8 p.m. Thursday, Jan. 2. (Editor’s note: since this story was initially published in the Greater Southwest News-Herald’s print edition, Marabis officials have shifted gear and announced that they will not sell cannabis for recreational use until February.)
The rush may be similar at Midway Dispensary, 5648 S. Archer, which will be open from 10 a.m. to 8 p.m. Wednesday, Jan. 1.
With recreational cannabis coming out of the shadows, thousands of users will need to be walked through the process of buying pot legally, Romo said.
At Maribis, “You’re going to come in with your state ID or driver’s license, and you’re going to either be looking at a television with a menu displayed or a binder menu,” he said. “In that sense it’s not going to be similar to the West Coast, where you go into a dispensary and you’re looking at and smelling the products.”
While it can argued that demand for legal, recreational cannabis will be so high that dispensaries have no need to advertise, both Maribis and Midway areÑin different ways to different audiences.
“We’ve had advertisements go out leaning towards the Spanish-speaking community,” Romo said. “That’s something that we’re trying to cater to, more Spanish-language and bilingual peopleÉtrying to get them out of the stigma that cannabis is bad and let them understand that it’s not as bad as they think.
“It’s not something that they have to consume, CBD and topicals,” he continued. “There’s stuff that’s not going to get you high, but it’s going to help with the pain. The community is starting to come around and see there’s nothing wrong with it. Another way we’ve been getting the word out is public outreach and leaving flyers around the neighborhood, letting them know we’ll be open for dual-use and to come in.”
While Maribis focuses on a specific population in the neighborhood, Midway Dispensary is aiming highÑfiguratively and literally. It has spent thousands of dollars to rent a high-visibility billboard, hundreds of feet above street level, near Archer and Cicero. The messageÑ”NONSTOP TO PAIN RELIEF” with an image of a passenger jet’s tailÑis clearly aimed at the 22.4 million passengers who head in and out of Midway Airport every year.
Presumably, thousands of people will be flying in from other states where recreational cannabis is not legal, to purchase cannabis in Chicago. Just a two-minute drive from the airport, Midway Dispensary hopes to cash in on what some are calling green tourism.

In anticipation of cannabis becoming legal for recreational use, Chicago Police have released a video with reminders about what the new law means in the city.

All those age 21 and older may legally purchase and possess up to 30 grams of cannabis leaf, 5 grams of cannabis concentrate and 500 grams of cannabis-infused products.
Cannabis may be purchased only at retailers licensed to sell the product. Currently on the Southwest Side, just Midway Dispensary and Maribis may sell legally. Private sales are illegal.
Growing cannabis remains illegal, except for businesses licensed to grow and private citizens who are registered medical cannabis users.
Consumption of cannabis products is legal in private residences or within businesses licenses for cannabis consumption.
Landlords and property owners have the option of banning cannabis consumption on their property.
Cannabis products may not be consumed in motor vehicles, on CTA property, on school grounds, in restaurants and bars, or in any public place (such as streets, sidewalks, parks and playgrounds).
People transporting cannabis in a motor vehicle are asked to put the products in a sealed, odor-proof, child-resistant container that is reasonably in accessible to the driver or passengers while the vehicle is in motion.
Police have said they will issue citations to those violating the rules. However, in a city where police struggle with so-called index crimes (such as homicide, battery, sexual assault, robbery and burglary), it remains to be seen if officers will spend any time writing tickets for Chicagoans smoking a joint on a sidewalk.
(Editor’s Note: More news coverage and photos in the print edition of the Greater Southwest News-Herald, available on local newsstands. Or better yet, call 708-496-0265 during weekday business hours and order convenient home delivery for about 50 cents a week.)