Skip to content
January 10, 2020/Comments Off on ‘Happy days’ on Archer 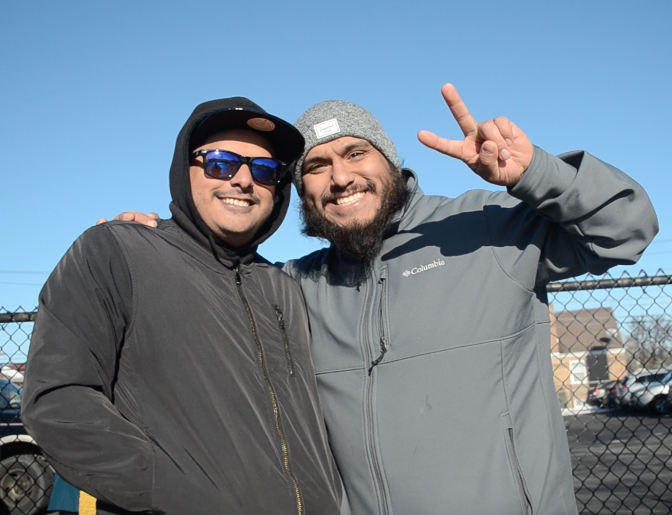 When Prohibition was repealed in December 1933, Chicagoans responded by crowding local taverns and hotels “five and six deep” to wet their whistles with legal beer, wine and liquor, according to the Chicago Daily Tribune. “Spirits were gay, and many sang cheerful songs like ‘Happy Days are Here Again’ and ‘Sweet Adeline.'”
Spirits were similarly high last week, as several thousand smiling men and women stood in line for hours outside Midway Dispensary, 5648 S. Archer, as Illinois ended its prohibition on the sale of cannabis for recreational purposes.
The dispensary, which has legally sold medical cannabis to accredited patients since it opened in 2016 as part of the Compassionate Use of Medical Cannabis Pilot Program, saw a first-day surge that amounted to five times as many customers as they usually see on a Wednesday.
The first customers arrived just after 4 a.m., some six hours before Midway Dispensary opened for the day. By the time the doors opened, the line of customers stretched a half block west on Archer (to Laramie) and then around the corner and north to the alley and even beyond that.
A couple of police SUVs were nearby, primarily to protect customers from pickpockets and robbersÑbut all appeared orderly; and although people stood in 40-degree weather for hours, the sun was shining brightly and provided warmth.
While most appeared in cheerful spiritsÑand while cannabis has been used for thousands of years (even Queen Victoria reportedly smoked it in the mid-1800s to alleviate menstrual cramps)–they also were reticent to give their names when asked by a reporter.
“I’m looking forward to buying marijuana legally, but I have an 85-year-old mother who reads your newspaper,” said one middle-aged woman who declined to say much. “For some elderly people, there’s still a bit of a stigma that goes with pot, and that won’t go away.”
Nearby, a somewhat younger man was a bit more talkative.
“You know what? I’ve been smoking pot since I was 15 years old,” said the man, who wore a smile with his Chicago Bears cap. “[Now that cannabis is legal], I don’t have to call [a dealer] no more. I don’t have to do any of that. I live three blocks away from here. I can just walk over when I want. I’ve been standing in line for about three hours now; but I’ve been waiting for this day for about 20 years, and it’s finally here.”
An off-duty police officer witnessing the scene said that legalization of cannabis for recreational use is “ultimately a good thing. It makes no sense to tie up [law enforcement] resources going after pot, when there are so many other crimes we could and should be going after. There’s not much difference between [smoking a joint] and drinking a beer. Actually, it’s less harmful than alcohol, I’d say.”
To thank customers for their patience, Midway Dispensary employees at several points walked the line and gave away Dunkin’ Donuts coffee and Wendy’s hamburgers to keep bellies full and spirits buoyant.
As is typically the case at Midway, customers were let in only a few at a time, via a secure entrance. Once inside, they examined and purchased limited amounts of cannabis in various forms: buds that can be rolled and smoked, food products made with cannabis, and extracts in the form of oils and tinctures that can be used in vaporizers or taken by mouth.
In the first few days of legal sales, as many as 2,500 people walked through Midway’s doorsÑcausing a supply shortage that forced the dispensary to temporarily suspend sales to recreational users. That should end today, and sales for recreational use are expected to resume, said Neal McQueeney of Midway Dispensary.
Several nearby residents and businesses voiced complaints on social media about the added congestion caused by Midway’s burst of success, as well as added litter from patrons on the sidewalks. But Midway staffers were out in force, sweeping the sidewalks and adjacent streets and picking up trashÑand McQueeney said that the dispensary’s expansion into an adjacent building will alleviate much of the concerns about crowding.

Illinois is the 11th state is to legalize the sale of cannabis for recreational use, and Archer Avenue was not the only place where history was made last week. Licensed dispensaries across the state opened their doors; and to show support, Governor JB Pritzker dispatched Lt. Governor Juliana Stratton to a dispensary in the Lakeview neighborhood, where she reportedly purchased a 100-milligram tin of Mindy’s Edibles Glazed Clementine Orange Gummies.

Speaking for the Pritzker Administration, Toi Hutchinson (Senior Advisor to the Governor for Cannabis Control) said in a statement, “As we start a new decade, Illinois has achieved a monumental milestone – launching the legalization of cannabis in a way that includes communities left behind for far too long, creates good jobs and expunges thousands of records for those who have lost out on opportunities and ends prohibition. Today is a historic new day, and as we move forward with growing this industry, I thank all those who worked hard to make the launch a success and will continue to dedicate themselves to expanding opportunities and righting the wrongs of the past.”