Skip to content
January 31, 2020/Comments Off on Sandoval pleads guilty 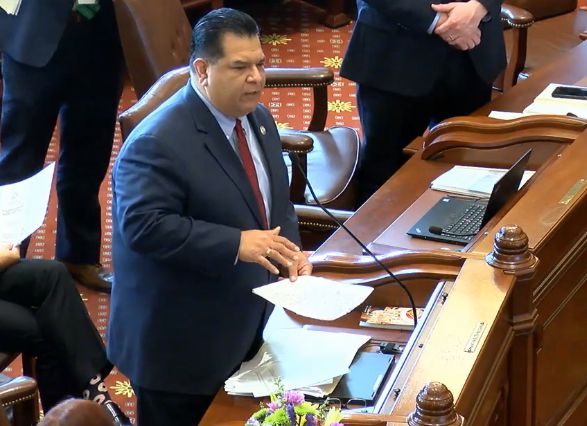 A Southwest Side politician whose supporters proudly predicted he’d one day sit in the Governor’s Mansion sat instead in federal court this week, his career and good name destroyed.
Former State Senator Martin A. Sandoval (D-11th) entered a plea deal in which he admitted to receiving more than $250,000 in bribes over a three-year period and filing a false tax return.
In exchange for his plea, Sandoval agreed to cooperate with federal investigators in other ongoing investigations and he will not face sentencing until he is finished cooperating. That cooperation includes the possibility of testifying against other defendants who may be charged.
The 11th District includes all of Clearing and most of Garfield Ridge, along with other city neighborhoods and suburban towns.
The plea deal was announced jointly by John R. Lausch Jr., U.S. attorney for the Northern District of Illinois, along with officials from the Chicago office of the FBI, the IRS Criminal Investigation Division and the U.S. Department of Transportation’s Office of Inspector General.
The bribery charge stems largely from Sandoval’s relationship with a company that installs and operates red light cameras for local governments in the Chicago area. Those are devices that automatically photograph and issue citations to people who fail to come to a full stop at red lights. Revenue collected from those citations typically is split between the municipality and the camera company.
The plea agreement spells out a list of facts to which Sandoval has admitted. It includes an admission that, beginning in 2016, Sandoval solicited and received $20,000 in annual campaign contributions from an entity prosecutors referred to as “Company A,” but which is widely believed to be SafeSpeed LLC, a company identified in a search warrant that federal agents executed on Sandoval’s Statehouse office in September.
The Chicago Tribune and Chicago Sun-Times each reported that during Tuesday’s hearing in federal court, Sandoval inadvertently identified the company when he said, “I used my office as state senator to help SafeSpeed Ñ er, company A … (and) be its protector in the Illinois senate and influence other officials to roll out the red-light camera program in Illinois.”
In 2017, according to the agreement, Sandoval asked a company official to break up those annual payments into smaller amounts that would show up in different reporting periods.
“Kind of, just kind of not make it obvious,” Sandoval said to the company official, according to the agreement, not knowing that the person was cooperating with investigators.
In March 2018, according to the agreement, Sandoval accepted $10,000 in cash from the company, “to be used for campaign-related expenses,” in exchange for Sandoval’s promise to block legislation that would have banned red light cameras in Illinois.
Beginning in July 2018, according to the document, he solicited $5,000 per month in “protection money” for using his position in the General Assembly to protect the company’s interests.
During a July 31, 2018, meeting, Sandoval told the company official that he was aware other people were getting payoffs. The official confirmed that other people received a percentage of revenue that the red light cameras brought in.
“It galls me to know, but because we’ve established such a great relationship, um, ’cause you know I’ll go balls to the walls for anything you ask me. … It’s hard for me to swallow how [people] make so much off of you. Right? And I gotta do the work,” Sandoval is quoted in the document as saying.
The plea agreement also suggests Sandoval is suspected of corrupt activities that go beyond his relationship with the red light camera company, and that other public officials were involved.
It states that he “also engaged in corrupt activities with other public officials and accepted money from other people in return for using his position as an Illinois state senator to attempt to benefit those people and their business interests. In total, (he) accepted over $250,000 in bribes as part of criminal activity that involved more than five participants.”
On the charge of tax fraud, the plea agreement states that for tax year 2017, Sandoval reported total income of $125,905 when in fact he had income that year of “at least $259,255,” including more than $10,000 he received in bribes.
Sandoval, 56, of the Gage Park neighborhood, resigned his 11th District Senate seat effective Jan. 1. He has since been succeeded by former State Rep. Celina Villanueva (D-21st).