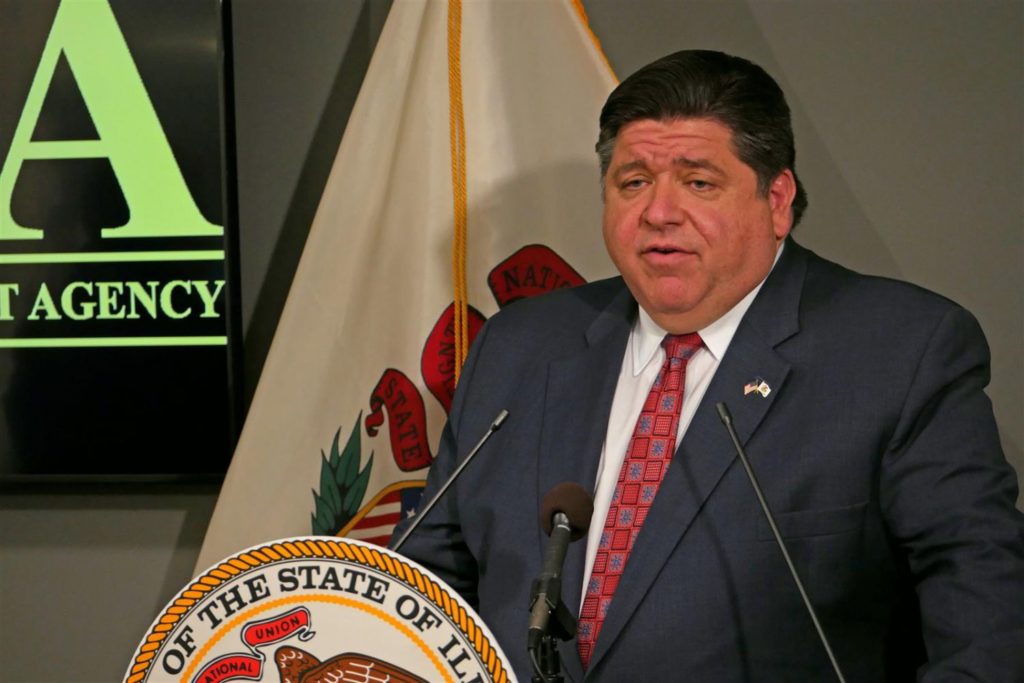 SPRINGFIELD Ñ Events attended by more than 50 people are banned in Illinois as part of a statewide near-shutdown aimed at slowing the spread of novel coronavirus disease, or COVID-19, but there is no need to hoard toilet paper and like supplies.

That message came from Gov. JB Pritzker and public health officials in the eighth straight daily briefing on the spread of COVID-19 since the governor declared a state of emergency on Monday, March 9.

Public health officials at the briefing announced 12 new confirmed cases Ñ including the first in Peoria and Will counties Ñ bringing the total number to 105 in Illinois.

“The numbers of cases are increasing each day, as is the number of locations,” said Dr. Ngozi Ezike, Illinois Department of Public Health director.

“People should assume that this novel coronavirus is in their community and take steps to protect themselves and reduce the spread,” she added. “There is evidence that the transmission of the virus often occurs when symptoms first develop. So it’s important to limit close contact with people as much as possible, even if you don’t feel that sick.”

Pritzker said the new 50-person limit on events complies with updated U.S. Centers for Disease Control and Prevention guidance. The executive order implementing it applies to faith-based organizations, fitness centers, private clubs, theaters and any others that would bring 50 people in close quarters.

However, it specifically allows groceries, pharmacies, gas stations, hospitals, shelters, banks and credit unions to stay open. Pritzker said he did not foresee any closure of the facilities exempted in the order, although he acknowledged circumstances change daily.

“Obviously the fundamental functions that people need,É being able to put gas in your car and all that, I cannot anticipate, I do not anticipate that we’ll be doing anything that will prevent people from getting in their own car if they absolutely need to,” he said.

“I would suggest to people they should stay home, but they may need to go to the grocer, they may need to go somewhere else, to go to a doctor, perhaps, so we’re not going to prevent any of that,” he added. “But I will say that I don’t know what the next day will bring. I mean, as you’ve seen, we’ve had to evolve as the science has evolved.”

Illinois Emergency Management Agency Director Alicia Tate-Nadeau said despite the precautionary measures to halt the spread of the virus, residents should not hoard supplies.

“There is no need to purchase dozens of packages of toilet paper at any one time,” she said. “Let me be clear Ñ hoarding is irresponsible. Please be considerate with others. É When people go out and buy more than they really need, they are hurting our most vulnerable neighbors. Please stop buying more than you need.”

When it comes to testing, Ezike said the state is prioritizing those who are at the highest risk of illness, and those who have mild symptoms should not demand to be tested.

“Those who need (testing) the most would be those of advanced age, those residing in long-term care facilities, those with pre-existing medical conditions like heart disease, lung disease, who are on chemo, dialysis with liver disease, or who are otherwise immunocompromised,” she said.

“We want to make sure that we have available beds for the sickest patients in our communities,” she said.

Pritzker said an executive order allowing for mobilization of the National Guard will allow Illinois to use its medical expertise and emergency manpower.

He said the National Guard can help with establishing triage centers outside of hospitals “so that people who might have COVID-19 aren’t traipsing into the emergency room and possibly, giving it to somebody else.”

Tate-Nadeau also said those with flu-like symptoms should not dial 911. Pritzker opened his news conference in Springfield by reiterating the state’s COVID-19 hotline Ñ 1-800-889-3931 Ñ will be able to answer questions, and the IDPH also has an email address for questions at [email protected]

More on the event ban

Pritzker’s most recent executive order directs the Illinois State Police, Fire Marshall and Liquor Control Commission to cooperate on enforcement of the 50-person event limit measure. He also said local communities would be involved in enforcing public health measures resulting from the state of emergency declaration.

“Obviously, you can’t police everything all the time, and so we obviously want communities to understand what the limitations are, understand what the orders are that have been given, and to follow them,” Pritzker said when asked about enforcing isolation measures. “And so we’re going to do our best to have the communities managing themselves.”

Pritzker said his administration is working with restaurant associations and owners to “find options to safely keep kitchens open for drive-thru, for curbside pickup and delivery.”

“During this period, I know that there are Illinoisans all across the state who get their paychecks from bars and restaurants. My administration has expanded unemployment insurance to cover individuals without access to paid sick leave, or who are unable to work due to COVID-19,” he said.

The governor added his administration has also sought a moratorium on utility shut-offs for residents who can’t pay their bills and has filed a federal waiver to expand Medicaid.